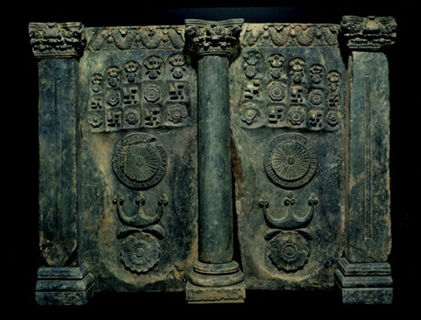 This smuggled Buddhist sculpture has been returned to the ownership of the Pakistani government. Credit: Manhattan District Attorney’s office

NEW YORK (AP) – An ancient Buddhist sculpture smuggled into the United States has been returned to the government of Pakistan by New York City prosecutors.

The 500-pound sculpture shows Buddha’s large footprints in a stone slab. Pakistani officials say it will remain in New York for the time being and may be exhibited at a museum in the city.

A Japanese antiquities dealer pleaded guilty to criminal possession of stolen property last month in a scheme to smuggle it into the U.S. He said he was motivated partly by a desire to protect Buddhist art from being neglected or destroyed in Pakistan. But art historians and scholars say there’s little truth to his argument.

Prosecutors say he shipped the second-century Buddhapada from Tokyo to New York, where it was expected to sell for $1.1 million.