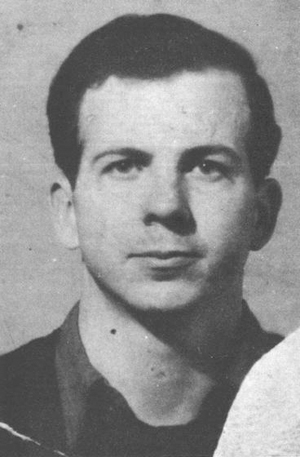 LOS ANGELES (AP) – The brother of Lee Harvey Oswald said Monday a coffin that once held the body of the presidential assassin should have been destroyed years ago rather then being auctioned off and allowed to exist as a ghoulish keepsake.

Robert L. Oswald said he didn’t know the coffin still existed until he read in a Texas newspaper this month that it had been put up for sale.

Oswald, 76, said he attempted to contact a funeral home owner to halt the sale, but his call was not returned. He said a similar request was ignored by the Santa Monica auction house that handled the sale.

“This is not about money on my part,”Oswald said. “The coffin should have been destroyed years ago, and that is what I desire now.”

Lee Harvey Oswald was shot to death at a Dallas police station two days after President John F. Kennedy was assassinated in an open convertible. Although Oswald was never put on trial, authorities concluded he was the killer.

An anonymous bidder on Dec. 16 bought the water-damaged coffin that held the body of Oswald until it was exhumed in 1981.

The bidder agreed to pay $87,469 after a spirited round of bidding that Nate D. Sanders Auctions of Santa Monica, Calif., said continued two hours past the original closing deadline.

Robert Oswald said he bought the original coffin in 1963 and believes that makes him its rightful owner. He has no plans to sell it and no immediate intent to file a lawsuit, he said.

“We’re going to evaluate all the legal options and see what needs to be done,” he said.

The retired salesman who lives in Wichita Falls, Texas, said he never gave anyone the authority to do anything with the coffin.

Sanders was out of the office and unavailable for comment, but auction house spokesman Sam Heller said he was unaware of any ownership dispute.

Texas funeral home owner Allen Baumgardner, who put the coffin up for sale, did not return calls. He previously said he swapped the coffin with Oswald’s family for a new one when the body was dug up then reburied in 1981.

Robert Oswald said he never heard from Baumgardner at that time and didn’t believe anyone else in the family had, although he couldn’t say for sure if his brother’s widow had been contacted. He noted his mother had died a few months before her son’s body was exhumed.

Baumgardner kept the coffin in a storage room at the Baumgardner Funeral Home, saying he hoped someone interested in its historical significance would buy it.

The body had been dug up to lay to rest conspiracy theories that Oswald wasn’t buried in the grave. The body was identified through dental records then returned to Rose Hill Memorial Burial Park in Fort Worth, Texas.

Baumgardner said he put the body in a new coffin after it was discovered Oswald’s burial vault had cracked, allowing moisture to damage the original coffin.