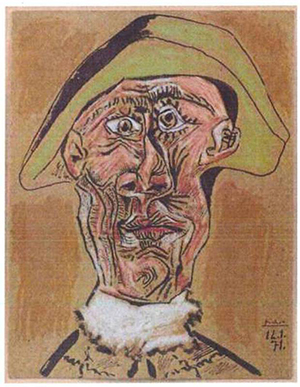 Dutch police handout photo of Pablo Picasso’s ‘Tete d’Arlequin,’ one of the paintings stolen in a daring art heist in the Netherlands. This particular artwork may have been incinerated by the mother of the perpetrator, in an effort to destroy incriminating evidence.

BUCHAREST, Romania – (AFP) – A Romanian court Tuesday handed a man who stole seven masterpieces from a Dutch museum a jail term of six years and eight months although the paintings’ fate remains unknown.

The 29-year-old Radu Dogaru, who admitted masterminding the spectacular three-minute heist of works by Picasso, Monet and Gauguin in October 2012, was not present in court for the verdict.

One of Dogaru’s accomplices, Eugen Darie, who drove him to and from the
Rotterdam museum, was also sentenced to six years and eight months in jail.

The missing works are feared destroyed after Dogaru’s mother, who is also
facing trial, said she had torched them in a bid to destroy evidence against
her son.


She later retracted her statement, but experts from Romania’s National
History Museum said ashes retrieved from her stove included the remains of
three oil paintings and nails from frames used before the end of the 19th
century.

A separate investigation into the possible destruction of the artwork is
under way.

Could Lovejoy be re-emerging from the antiques closet?
Scroll to top