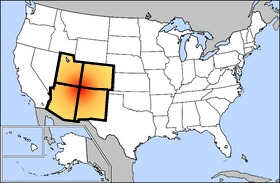 The Four Corners region is in the red area on this map. Image courtesy Wikimedia Commons.

SALT LAKE CITY (AP) – A Colorado man who sold American Indian relics on the Internet is the latest person charged in a far-reaching federal investigation into the looting of ancient Southwestern artifacts.

A federal grand jury in Denver indicted Robert B. Knowlton, 66, late Tuesday. The Grand Junction man is charged with four counts of illegally selling archaeological artifacts and one count of transporting them from Colorado to Utah.

Knowlton is the 26th person charged as part of a federal sting spanning more than two years in the Four Corners region. He’s accused of selling and mailing three items last year taken from federal land: a pipe, a Midland knife point and a Hell Gap knife.

Knowlton – who ran an Internet-based business called Bob’s Flint Shop – met at least twice in 2008 with an artifacts dealer working undercover for the FBI and the U.S. Bureau of Land Management, according to a search warrant affidavit.

On one of those visits, Knowlton said his collection included about 3,700 artifacts with a retail value of a half-million dollars or more, documents said.

He told the informant he bought the Midland knife point from a “park ranger” who said he found it after a fire on U.S. Forest Service land near Telluride, records say. He said he bought “a lot of stuff” from the ranger.

The Hell Gap knife came from an area near a southern Utah airport, Knowlton told the informant.

The two settled on $8,600 for several items, including the three mentioned in the indictment. The informant pulled out a stack of $100 bills and asked if cash was OK.

“Knowlton said ‘I like that I don’t have to tell nobody,'” according to the affidavit.

He agreed to mail the three items to Utah. Once they arrived, the informant turned them over to federal authorities, according to the affidavit.

Knowlton hasn’t been arrested. Federal officials say he’ll get a summons to appear in federal court on Sept. 14.

The charges come a week after a Durango, Colo., antiquities dealer named Vern Crites surrendered his vast collection of artifacts after being named in federal charges earlier this summer.

Of the 25 people previously charged, a mother and daughter from southern Utah have pleaded guilty, two others – including a prominent Blanding, Utah doctor – committed suicide and others have pleaded not guilty and are awaiting trial.

The operation is the first to deeply penetrate the large-scale black market for Indian artifacts illegally taken from federal or tribal lands.

The sting relied heavily on the informant, who was equipped to provide federal agents with wireless video feeds from homes and shops where he ultimately spent more than $335,000 on bowls, stone pipes, sandals, jars, pendants, necklaces and other items.

While the underground market assigns monetary value to the items, federal officials have said many of the artifacts are priceless.

“The true value of cultural resources lies in their context, as well as the sacred and scientific meanings such archaeological artifacts provide us as a people,” Jeanne M. Proctor, the BLM’s top law enforcement officer in Colorado, said in a statement Wednesday.

If convicted, Knowlton faces up to two years in federal prison and a $20,000 fine for each count of selling and transporting an archaeological resource. If convicted of the charge of interstate transportation of stolen property, he could get up to 10 years in prison and a $250,000 fine, according to federal officials.