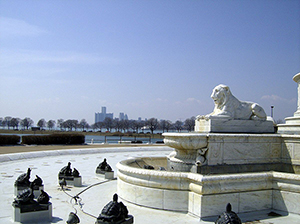 A view of Detroit from Belle Isle Park. Image by Mike Russell. This file is licensed under the Creative Commons Attribution-Share Alike 3.0 Unported license.

DETROIT (AP) – A New York-based bond insurer wants the Detroit Institute of Arts and the city’s emergency manager to hand over years of financial records and other documents related to city-owned pieces in the art museum.

Syncora Capital Assurance and Syncora Guarantee also said Friday in a filing in bankruptcy court in Detroit that it will serve subpoenas on the art museum, an auction house that performed a valuation of some of the artwork and the state.

It’s the latest action by Syncora, which has also contested Detroit’s bankruptcy and the city’s attempts to pay some creditors far less than they’re owed. One fight is against the city’s plan to pay off a bad pension debt deal with two banks, which would cost Syncora millions of dollars.

Among the materials Syncora is seeking from the DIA are records identifying “any object or work of art in the collection that has been appraised or valued for more than $1 million” and communications between the city and “individuals, investors, art collectors, or corporations relating to the sale or purchase of the collection.”

Syncora also wants all inventory records over the past five years and even contracts and deeds tied to the 1919 handover of art museum assets to the city.

“Syncora and the other insurers are in the business of securing risky debt,” Bill Nowling, spokesman for emergency manager Kevyn Orr, told The Associated Press Saturday in an email. “Sometimes that debt – as is the case with Detroit – must be restructured and insurers must pay a claim. Syncora and the insurers want to force the city to sell art, cut pensions even further and slash essential services to avoid paying those claims to investors.”

Orr alerted DIA officials last spring that city-owned artwork could be considered assets if Detroit ever went into bankruptcy. In July, he made Detroit the largest U.S. city to ever seek bankruptcy. The bankruptcy petition was approved in December.

Christie’s auction house has valued about 2,800 city-owned pieces of art at between $454 million and $867 million.

Foundations and others have pledged $365 million to keep the art from being sold. Gov. Rick Snyder has said he will seek $350 million from the state to aid that cause, while the museum vowed to raise $100 million. That money would go to city retirees to soften the impact of cuts to their pension benefits.

But Syncora’s interest in what the city is worth appears to go beyond art. Its court filing also wants documents related to any potential sale of assets topping $1 million. It names Detroit’s Belle Isle park, the city’s portion of an underwater commuter tunnel to Windsor, Ontario, in Canada, parking facilities and a small municipal airport as assets. 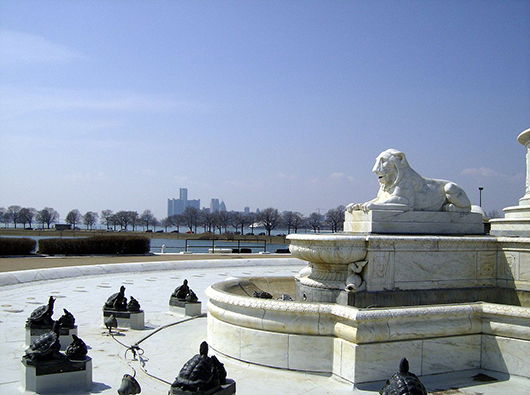 A view of Detroit from Belle Isle Park. Image by Mike Russell. This file is licensed under the Creative Commons Attribution-Share Alike 3.0 Unported license.