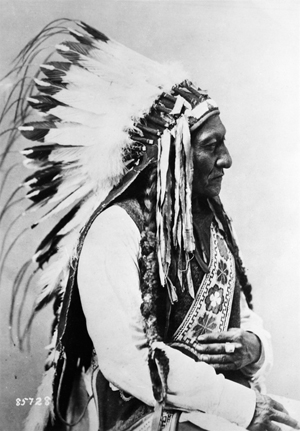 Sitting Bull, the Lakota Sioux tribal chief who was a central figure in the Battle of the Little Bighorn. Image courtesy of Wikimedia Commons.

GARRYOWEN, Mont. (AP) – A few miles from where George Custer made his infamous Last Stand against thousands of Sioux and Cheyenne Indians, artifacts dealer Christopher Kortlander is waging his own battle with authorities to reclaim a trove of war bonnets, medicine bags and other items seized during government raids on his privately operated Custer museum.

The raids came during a five-year investigation into Kortlander’s alleged dealings in fraudulent artifacts and eagle feathers in violation of federal law. No charges were ever filed. The government dropped its investigation in 2009, and most of the items seized during the raids—including 7th Cavalry memorabilia, other American Indian artifacts and thousands of pages of documents—have since been returned.

Yet the dispute between Kortlander and the government rages on. Sealed court filings obtained by The Associated Press show the government still holds 22 items, partly on the word of a convicted felon who claimed Kortlander acquired them illegally. Many contain eagle or migratory bird feathers, which government attorneys said in court documents renders the items “contraband” under the Bald Eagle Protection Act and Migratory Bird Treaty Act.

U.S. District Judge Richard Cebull, who is overseeing the case, has cast doubt on the credibility of the government’s witnesses, but also said Kortlander must be cross-examined to prove the war bonnets and other items were lawfully acquired.

Kortlander, 53, is a one-time candidate for local sheriff who presides over a mini-fiefdom in the small community of Garryowen. The “privately owned town,” as he calls it, includes the Custer Battlefield Museum and an attached gas station-post office-convenience store-restaurant that Kortlander operates. Garryowen is on the Crow Indian Reservation, although Kortlander is not a member of the tribe.

He argues the government’s efforts to hold onto the seized items stem from a stubborn refusal to admit the raids against him were based on false assumptions and should never have occurred.

“In 1876 the federal government came to Garryowen and lost,” Kortlander said, referring to the Battle of Little Bighorn that led to the deaths of Custer and members of his 7th Cavalry. “Now they are in Garryowen again, and they are going to lose.”

Kortlander said the investigation and resulting litigation have cost him hundreds of thousands of dollars in legal fees, ruined many of his friendships and business relationships and derailed plans for a $30 million museum at Garryowen centered on his extensive collection of manuscripts from Custer’s wife, Elizabeth.

Federal officials from the U.S. Attorney’s Office and Bureau of Land Management declined comment on the case because of pending lawsuits from Kortlander. Brian Cornell, the former BLM special agent who led the fraudulent artifacts investigation, said he was restricted from talking about the matter because of the lawsuits

Since the raids, Kortlander has waged an aggressive legal counter-attack, including motions for the return of the remaining items seized during the raids in 2005 and 2008. Through a separate tort claim he is seeking $188 million dollars in alleged damages from the government’s dropped investigation.

Several related cases already resolved yielded mixed results. Following an earlier lawsuit by Kortlander, federal courts ordered the government to release thousands of pages of materials related to the investigation. That included a decision from the U.S. 9th Circuit Court of Appeals that Kortlander was not restricted in his use of the investigative materials, overturning an earlier ruling from Judge Cebull.

Cebull struck down another lawsuit in which Kortlander claimed government law enforcement agents maliciously pursued him in order to advance their own careers.

In dismissing the claim, Cebull said the government had “rock-solid” probable cause to seek a search warrant in the 2008 raid.

But the affidavit from Cornell for the 2008 search of the Custer Battlefield Museum reveals that the government’s case relied in part on statements from a Montana appraiser, James Brubaker, who said he sold eagle parts and feathers to Kortlander.

Brubaker has since served a federal prison sentence for possession and interstate transportation of stolen property. Authorities said he traveled the country stealing rare and valuable books and maps from public libraries and then selling them on eBay.

Cebull appears to refer to Brubaker in a court order that set an evidentiary hearing in the case for Feb. 3. Saying that any witnesses in the case would need to be cross-examined, Cebull wrote “the government relies on hearsay from a convicted felon” to establish that many of the seized items had been illegally bought by Kortlander.

Kortlander contends he never fraudulently or illegally sold battlefield or Indian artifacts. The feathered artifacts classified by the government as contraband include items donated or loaned to the museum and personal family heirlooms, he said.

A former associate who said he was one of the government’s informants in the case disputed Kortlander’s claim to innocence. The informant, Jason Pitsch, has his own credibility issues: He is currently detained in a Yellowstone County, Mont., jail in on federal child pornography charges.

Pitsch’s family owns land at the Battle of Little Bighorn site. In a recent jailhouse interview, Pitsch alleged that prior to the first raid Kortlander sold a bullet cartridge casing on eBay claiming it was from the battlefield and attaching a copy of a certificate with Pitsch’s forged signature. He said he learned of the sale when the buyer later contacted him.

Kortlander said the claim was “100 percent inaccurate” and provided a 2004 statement in which Pitsch acknowledged making fraudulent claims of his own about another artifact, a pair of boots that he sold to the museum. Kortlander added that he had once turned in Pitsch to authorities after seeing him view child pornography, possibly motivating Pitsch to now seek revenge.

Another former associate, James “Putt” Thompson, vouched for Kortlander, despite the fact that both men said their friendship and business relationship ended after the 2008 raid. Thompson was the curator of the Custer Battlefield Museum at the time of the raids and leased a trading post on the site.

“It was all legit and they made it look like we were criminals,” said Thompson, who now runs the unrelated Custer Battlefield Trading Post in nearby Crow Agency.

Friday’s hearing before Cebull could decide whether the government must return the seized war bonnets and other items.

Once the case is resolved, Kortlander said he intends to revive his efforts to build a new museum around the Elizabeth Custer manuscripts. He said he will either collaborate with a philanthropist to raise the needed $30 million—or use the proceeds from his tort claim if he prevails in his lawsuit seeking damages from the government.

For now, Kortlander says he is stuck in what he called a legal “gray area,” with his past activities still in question even though the government’s criminal probe has been dropped. Yet he’s hoping the tables have turned.

“I’m the plaintiff. They’re the defendants,” he said. 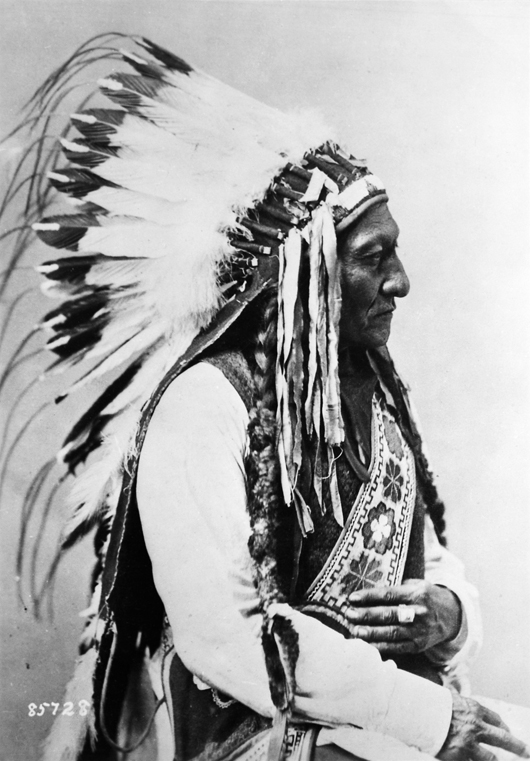 Sitting Bull, the Lakota Sioux tribal chief who was a central figure in the Battle of the Little Bighorn. Image courtesy of Wikimedia Commons.