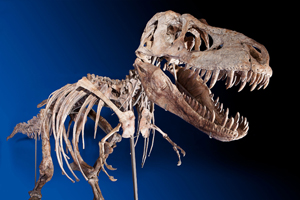 NEW YORK (AP) — A Florida fossils dealer pleaded guilty to smuggling charges Thursday and agreed to give up a celebrated $1 million dinosaur skeleton seized by the U.S. government earlier this year for its eventual return to Mongolia.

Eric Prokopi, 38, said he would surrender the 70 million-year-old Tyrannosaurus bataar skeleton known as “Ty” and give up any claims to six other dinosaurs and various other bones in a cooperation deal that might win him leniency from charges that carry a potential prison sentence of up to 17 years.

Assistant U.S. Attorney Martin S. Bell read a list of the dinosaurs to Magistrate Judge Ronald L. Ellis, saying a second substantially complete Tyrannosaurus skeleton was found at Prokopi’s Gainesville, Fla., home, while a third was believed to be in Great Britain.

Bell said the government will also get to keep a Chinese flying dinosaur that Prokopi illegally imported; a skeleton of a Saurolophus, a duckbilled, plant eating dinosaur from the late Cretaceous period; and two Oviraptor skeletons, one found at Prokopi’s home and the other at another residential dwelling in Florida. The Oviraptors have parrot-like skulls.

In a release, U.S. Attorney Preet Bharara said: “Fossils and ancient skeletal remains are part of the fabric of a country’s natural history and cultural heritage, and black marketers like Prokopi who illegally export and sell these wonders, steal a slice of that history. We are pleased that we can now begin the process of returning these prehistoric fossils to their countries of origin.”

The government accused Prokopi of smuggling bones into the country illegally from Mongolia before assembling them into a skeleton that was sold by Dallas-based Heritage Auctions for $1.05 million, a deal that was suspended pending the outcome of litigation. The government said the dinosaur skeleton was mislabeled as reptile bones from Great Britain.

Prokopi remains free on bail pending a sentencing scheduled for April 25. After his plea Thursday, he immediately went with prosecutors to their offices without commenting.

In a statement last spring, Prokopi defended his handling of the dinosaur, saying the value of the bones was labeled much lower than the eventual auction price because “it was loose, mostly broken bones and rocks with embedded bones. It was not what you see today, a virtually complete, mounted skeleton.”

Prokopi pleaded guilty to conspiracy for importing the Chinese flying dinosaur, entry by goods by means of false statements for importing Mongolian dinosaurs and one count of interstate and foreign transportation of goods converted and taken by fraud.

In describing his crimes, Prokopi said he wrote an email to a fossils dealer in China in 2010, instructing him to mislabel customs documents to make it appear that the bones of a Chinese flying dinosaur were worth less than they were.

He said that from 2010 to 2012, he arranged for shipments of fossils from Mongolia to be described in customs documents as if their country of origin were Great Britain.

The magistrate judge asked Prokopi if the country of origin on the documents was an important fact.

Afterward, Prokopi said the labeling of the relics was purposefully “vague and misleading so that they didn’t bring attention to the shipment.”

The magistrate judge asked him what would have happened if he had labeled them accurately.

“Probably nothing,” Prokopi said, pausing and then adding, “or it may not have been allowed to be imported.” 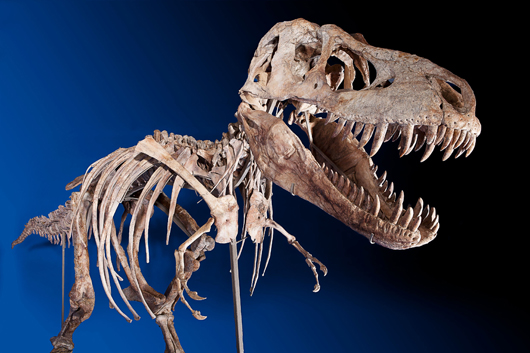 Language is no barrier to Sherlock Holmes collector
Scroll to top