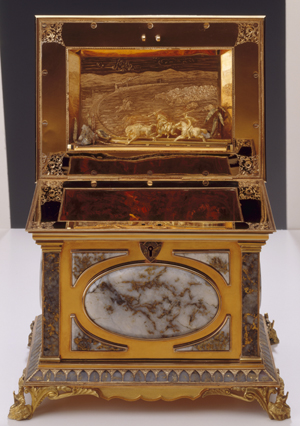 OAKLAND, Calif. (AP) – A 45-year-old parolee has been arrested in connection with the theft of a valuable Gold Rush-era jewelry box from the Oakland Museum of California.

Alameda County prosecutors on Tuesday charged Andre Taray Franklin, of Oakland, with one count of receiving stolen property after he was arrested Sunday in Oakland. He is being held in jail without bail.

The 19th century gold-encrusted jewelry box valued at more than $800,000 was stolen from the museum on Jan. 9. It depicts images of early California history and was originally a wedding anniversary gift from a San Francisco pioneer to his wife in the 1800s.

The rare artifact, which is about the size of a small shoebox and weighs about three pounds, was returned to the museum on Tuesday. It was again enclosed in a large Plexiglas case under the careful watch of a security guard.

“It is a happy day for Oakland and a happy day for the state of California,” museum director Lori Fogarty told reporters. “Thanks to the tremendous efforts of the Oakland Police Department, we have our beautiful and historical jewelry box returned to the museum and a suspect in custody.”

Police say Franklin is also a suspect in the November theft of gold nuggets and Gold Rush-era pistols that were also stolen from the popular Gallery of California History exhibit. Those items have not yet been recovered.

Video surveillance in the museum during the second theft two months ago played “a key role” in identifying Franklin as a possible suspect, Oakland police spokeswoman Johnna Watson said Tuesday.

The jewelry box had been in a Plexiglas case equipped with an alarm that sounded after it was stolen, Fogarty said, adding that police arrived in less than five minutes. Both thefts were caught on security cameras, she added.

After the first theft in November, Fogarty said the museum added extra security guards and cameras.

“They have a lot of different pressures, a lot of different crises and then a lot of every day crimes in addition to something as spectacular as this,” Quan said. “I don’t think they get enough credit when they’re successful, so I think the whole community and the whole state wants to thank the department.”

“Well, what affected me was the history, our California history, our American history, our heritage,” Igualdo said. “I think a lot of young kids should know their heritage, where America had started and how it was a country of opportunity.”

Igualdo said that he and a team of investigators thought they were in the movie National Treasure, after they discovered the artifact.

It was not the first time the jewel box, which has been associated with the museum since the 1960s, was stolen. Fogarty said it was taken in 1978 and recovered at an auction house several years later.

“We are committed to this never happening again,” Fogarty said Tuesday. “We have really worked tirelessly in the last four months to improve our (security) systems to make sure everything we can do is in place.”

Fogarty said the box will be back on display after it undergoes an inspection, despite it being stolen twice.

“It is our mission and our responsibility to share California’s history with the public,” Fogarty said. “And if we were just a treasurer’s trove and a mausoleum, then we wouldn’t be serving our mission.” 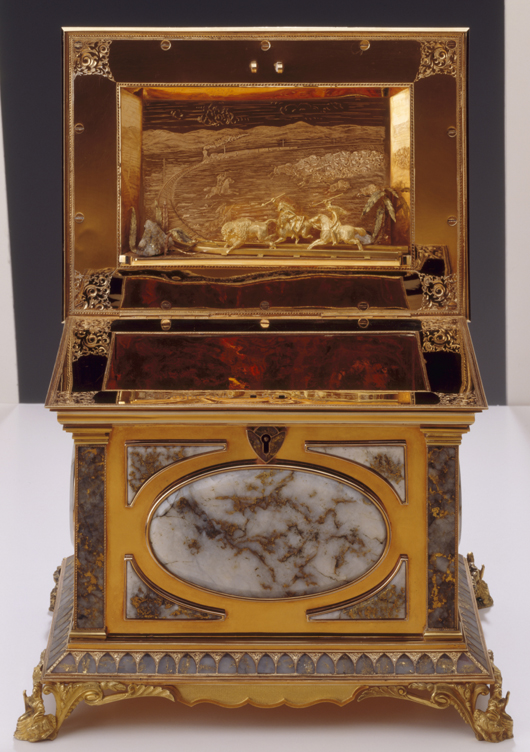