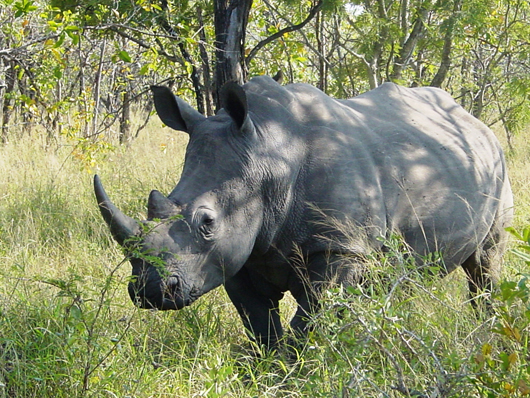 Due to poaching for their horns, white rhinos are critically endangered. This white rhino was photographed in Kruger National Park, South Africa. Photo by Esculapio, licensed under the Creative Commons Attribution-Share Alike 3.0 Unported License.

BOSTON (AP) – An Australian citizen who masterminded a scheme to smuggle items made of rhinoceros horn, elephant ivory and coral to China pleaded guilty Tuesday in a U.S. court.

Guan Zong Chen, who also goes by Graham Chen, and two co-defendants smuggled $700,000 worth of carvings in violation of federal law and despite the fact that their export was barred under a 1976 international treaty meant to protect endangered species, federal prosecutors said.

Chen pleaded guilty in U.S. District Court in Boston to charges including conspiracy to export protected wildlife, exporting protected wildlife without required permits and smuggling. He faces 15 years in prison when he’s sentenced.

Chen owned an antiques business in China and was barred from traveling to the U.S. because of a 2009 ivory trafficking conviction. He enlisted the help of a Chinese national and a Massachusetts woman in the scheme.

Jin Jie Yang traveled to the U.S. at Chen’s expense and bought the items at auction houses in several U.S. states, prosecutors said.

He brought the items to Carla Marsh, who owned a shipping business in Concord, Massachusetts. Marsh repacked and mailed the items to Hong Kong with documents that falsely stated the contents and value and without required permits. In one case, she claimed an elephant ivory sculpture was made of wood and worth only $50.

Chen was arrested last year when he traveled from China to Australia and extradited to the U.S. in July.