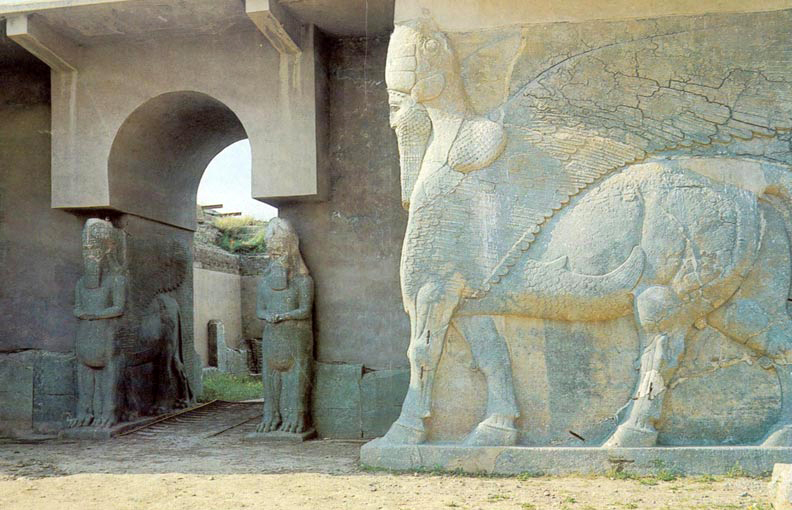 BAGHDAD (AP) – The videos of Islamic State militants destroying ancient artifacts in Iraq’s museums and blowing up 3,000-year-old temples are chilling enough, but one of Iraq’s top antiquities officials is now saying the destruction is a cover for an even more sinister activity – the systematic looting of Iraq’s cultural heritage.

In the videos that appeared in April, militants can be seen taking sledgehammers to the iconic winged-bulls of Assyria and sawing apart floral reliefs in the palace of Ashurnasirpal II in Nimrud before the entire site is destroyed with explosives. But according to Qais Hussein Rashid, head of Iraq’s State Board for Antiquities and Heritage, that was just the final step in a deeper game.

“According to our sources, the Islamic State started days before destroying this site by digging in this area, mainly the palace,” he told The Associated Press from his office next to Iraq’s National Museum – itself a target of looting after the 2003 U.S.-led invasion that ousted Saddam Hussein. “We think that they first started digging around these areas to get the artifacts, then they started demolishing them as a cover up.”

While there is no firm evidence of the amount of money being made by the Islamic State group from looting antiquities, satellite photos and anecdotal evidence confirm widespread plundering of archaeological sites in areas under IS control.

Nimrud was also the site of one of the greatest discoveries in Iraqi history, stunning golden jewelry from a royal tomb found in 1989, and Rashid is worried that more such tombs lie beneath the site and have been plundered. He estimated the potential income from looting to be in the millions of dollars.

Experts speculate that the large pieces are destroyed with sledgehammers and drills for the benefit of the cameras, while the more portable items like figurines, masks and ancient clay cuneiform tablets are smuggled to dealers in Turkey.

On Wednesday, Egypt, together with the Antiquities Coalition and the Washington-based Middle East Institute will be holding a conference in Cairo entitled “Cultural Property Under Threat” to come up with regional solutions to the plundering and sale of antiquities.

This isn’t the first time, of course, that Iraq’s antiquities have fallen victim to current events. There was the infamous looting of the museum in 2003 and reports of widespread plundering of archaeological sites in the subsequent years, especially in the south. U.S. investigators at the time said al-Qaida was funding its activities with illicit sales of antiquities.

What appears to be different this time is the sheer scale and systematic nature of the looting, especially in the parts of Syria controlled by the Islamic State group. Satellite photos show some sites so riddled with holes they look like a moonscape.

The G-7’s Financial Action Task Force said in a February report that the Islamic State group is making money both by selling artifacts directly – as probably would be the case with material taken from the museums – or by taxing criminal gangs that dig at the sites in their territory. After oil sales, extortion and kidnapping, antiquities sales are believed to be one of the group’s main sources of funding.

In February, the United Nations passed a resolution recognizing that the Islamic State group was “generating income from the direct or indirect trade,” in stolen artifacts, and added a ban on the illicit sale of Syrian antiquities to the already existing one on Iraqi artifacts passed in 2003.

While Iraq contains remains from civilizations dating back more than 5,000 years, the hardest hit artifacts have come from the Assyrian empire, which at its height in 700 B.C. stretched from Iran to the Mediterranean and whose ancient core almost exactly covers the area now controlled by the Islamic State group.

The looted artifacts most likely follow the traditional smuggling routes for all sorts of illicit goods into Turkey, according to Lynda Albertson, head of the Association for Research into Crimes Against Art. From there, the most common route is through Bulgaria and the Balkans into Western Europe. Britain and the United States remain the biggest markets for antiquities, though wealthy collectors are emerging in China and the Gulf – especially for Islamic-era artifacts.

International bans make the ultimate sale of illicit antiquities difficult, but not impossible. So far, there have been no reports of major, museum-quality pieces from IS-held territory appearing in auction houses, so the artifacts must be going to either private collectors or they are being hoarded by dealers to be slowly and discretely released onto the market, said Patty Gerstenblith, Director of the Center for Art, Museum and Cultural Heritage Law at DePaul University.

“I do believe that dealers are willing to warehouse items for a long time and that they may be receiving some ‘financing’ to do this from well-heeled collectors or other dealers operating outside of the Middle East,” she said. “It is relatively unlikely that a major piece would be plausibly sold on the open market with a story that it was in a private collection for a long period of time.”

Mesopotamian sculptures, jewelry and stelae sold legally have commanded stunning sums, up to $1 million in some cases, but the looters would be selling them to dealers for a fraction of that cost – with the profit margin coming from the sheer number of artifacts being sold.

Iraq has sent lists to the International Council of Museums, the U.N. and Interpol detailing all the artifacts that might have been looted from the museum in Mosul, Iraq’s second-largest city overrun by IS last June. Harder to stop, however, is the sale of never-before-seen pieces that have been newly dug up and never registered.

There is new legislation going through the U.S. Congress to tighten controls on illicit trafficking of materials from the Middle East, though Albertson contends that the laws are less important than the manpower devoted to enforcing them.

“A new resolution is just another well-intentioned piece of ineffective paper,” she said.

The Iraqi government is now rushing to document the remaining sites in the country, especially in the disputed province of Salahuddin, just south of the Islamic State stronghold in Nineweh province. Nineweh itself is home to 1,700 archaeological sites, all under IS control, said Rashid of the antiquities department.

As a number of experts point out, though, most sites in Iraq have not been completely excavated and there are likely more winged bull statues and stelae waiting to be found under the earthen mounds scattered throughout this country – assuming the Islamic State group and its diggers don’t find them first.