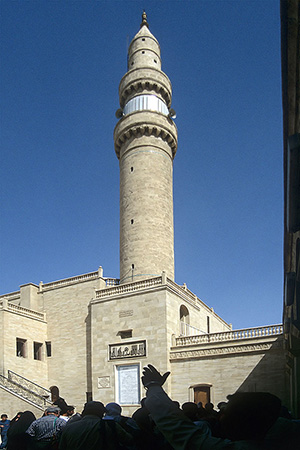 The shrine of Jonah in Mosul was destroyed by explosives set by forces of the Islamic State of Iraq and the Levant on July 24. Image by Roland Unger. This file is licensed under the Creative Commons Attribution-ShareAlike 3.0 Unported license.

BAGHDAD (AP) – For more than 5,000 years, numerous civilizations have left their mark on upper Mesopotamia – from Assyrians and Akkadians to Babylonians and Romans. Their ancient, buried cities, palaces and temples packed with monumental art are scattered across what is now northern Iraq and eastern Syria.

Now much of that archaeological wealth is under the control of extremists from the Islamic State group. The militants have demolished some artifacts in their zealotry to uproot what they see as heresy, but they are also profiting from it, hacking relics off palace walls or digging them out to sell on the international black market.

Antiquities officials in Iraq and Syria warn of a disaster as the region’s history is erased.

In Iraq, black market dealers are coming into areas controlled by the Islamic State group or in safe regions nearby to snap up items, said Qais Hussein Rashid, head of the state-run Museums Department, citing reports from local antiquities officials still in the area.

When the militants overran the northern city of Mosul and surrounding Ninevah province in June, they captured a region were nearly 1,800 of Iraq’s 12,000 registered archaeological sites are located. They snapped up even more as they pushed south toward Baghdad.

Among the most important sites under their control are four ancient cities – Ninevah, Kalhu, Dur Sharrukin and Ashur – which were at different times the capital of the mighty Assyrian Empire. The Assyrians first arose around 2500 B.C. and at one point ruled over a realm stretching from the Mediterranean coast to Iran.

The heaviest damage confirmed so far has taken place in the grand palace at Kalhu, from which Assyrian King Ashurnasirpal II reigned in the ninth century B.C., Rasheed said. The palace walls are lined with reliefs describing the king’s military campaigns and conquests or depicting him hunting lions or making sacrifices to the gods.

“They are cutting these reliefs into small parts and selling them,” Rasheed continued. “They don’t need to excavate. They just need a chain saw to cut the king’s head or legs if they want.”

Recently they carved off a relief depicting a winged demon holding a sacred plant and sold it abroad, he said. “It is now beyond borders.”

Authorities fear other sites will soon face destruction, including Mosul’s city museum, which has rare collections of Assyrian artifacts, and the 2,300-year-old city of Hatra, a well preserved complex of temples further south. From both locations, militants ordered out antiquities officials, chastising them for protecting “idols,” Rasheed said.

So far, it appears the militants have not done anything with the artifacts at the sites because they are awaiting instructions from their religious authorities, he said.

The Islamic State militants seek to purge society of everything that doesn’t conform with their strict, puritanical version of Islam. That means destroying not only relics seen as pagan but even some Islamic sites – Sunni Muslim shrines they see as idolatrous, as well as mosques used by Shiites, a branch of Islam they consider heretical.

In and around Mosul, the militants destroyed at least 30 historic sites, including the Islamic mosque-shrines of the prophets Seth, Jirjis and Jonah. The shrines were centuries old in many cases.

But their extremist ideology doesn’t prevent them from also profiting from the sale of ancient artifacts, either by selling them themselves or taking a cut from thieves who are increasingly active in looting sites.

The shrine of Jonah was built on top of an unexcavated palace in the ancient Assyrian capital of Ninevah. After blowing up the mosque, thieves burrowed underneath and are believed to have taken artifacts, said Rasheed, citing reports from local antiquities officials who remain in Mosul.

It is unclear how much the militants are earning from antiquities. U.S. intelligence officials said the Islamic State rakes in more than $3 million a day from multiple sources, including smuggling of oil and antiquities, human trafficking, extortion of businessmen, ransoms and outright theft. The officials, who spoke on condition of anonymity to discuss classified assessments, said the militants sell goods through smuggling networks in the Kurdish region, Turkey and Jordan.

In civil war-torn Syria, looting of archaeological sites is believed to have increased tenfold since early 2013 because of the country’s chaos, said Maamoun Abdulkarim, Syria’s director-general of antiquities and museums. The past year, the Islamic State group has overrun most of the east, putting a string of major archaeological sites in their hands.

In one known case, they have demolished relics as part of their purge of paganism, destroying several Assyrian-era statues looted from a site known as Tell Ajaja, Abulkarim said. Photos posted online showed the gunmen using hammers to break apart the statues of bearded figures.

More often, the extremists seem to have latched onto the antiquities trade.

For example, the 2,300-year-old city of Dura Europos is being pillaged. The site is in one a cliff overlooking the Euphrates near the Iraq border in an area under the Islamic State group’s control, and satellite imagery taken in April show it pockmarked with holes from illegal digs by antiquity-seekers.

Images showed hundreds of people excavating on some days from dawn to nightfall, with gunmen and gangs involved, said Abdulkarim. Dealers are at the site and “when they discover an artifact, the sale takes place immediately,” he said. “They are destroying entire pages of Syrian history.”

Dura Europos is remarkably well preserved cultural crossroads, a city first founded by Alexander the Great’s successors and later ruled by Romans and various Persian empires. It boasts pagan temples, churches and one of the earliest known Jewish synagogues. Archaeologists in 2009 found likely evidence of an early use of chemical warfare: During a second century siege, Persian attackers dug tunnels under the city walls and set fires that poured poisonous sulfur-laced fumes on the Roman defenders above.

Alarmed by the militants’ advance, the United Nations’ cultural agency UNESCO adopted an emergency plan to safeguard Iraq’s cultural heritage. It called on art dealers and museums not to deal with Iraqi artifacts and alerted neighboring countries of potential smuggling.

“We are very, very, very concerned that the situation could be aggravated in a way that causes more and more damage,” Nada al-Hassan, of the UNESCO World Heritage Centre, told The Associated Press. 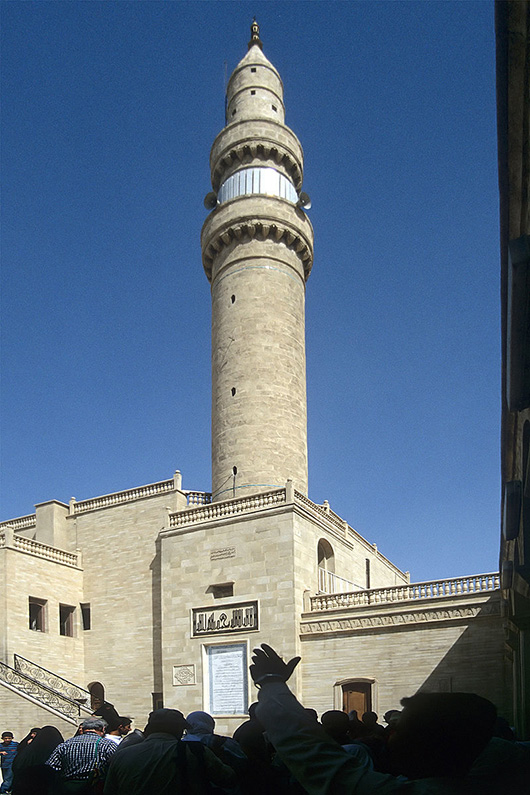 The shrine of Jonah in Mosul was destroyed by explosives set by forces of the Islamic State of Iraq and the Levant on July 24. Image by Roland Unger. This file is licensed under the Creative Commons Attribution-ShareAlike 3.0 Unported license.

IS says it destroyed ancient busts from Palmyra