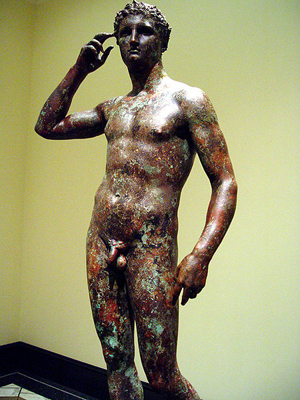 Victorious Youth, also known as the Getty Bronze, from the Hellenistic Period and depicting an athlete crowning himself. Photo taken 2-12-2006 by 3dnatureguy. Image appears courtesy of the photographer through Creative Commons GNU Free Documentation license.

ROME (AP) – An Italian court on Thursday ordered an ancient Greek statue bought by the J. Paul Getty Museum seized so it can be returned to Italy, officials said.

The Los Angeles museum said it would appeal the decision to Italy’s highest court and would “vigorously defend” its right to keep the bronze.

Under Italian law, however, the decision of the Pesaro court is effective immediately, said Maurizio Fiorilli, the attorney representing the Italian government in the case.

Based on the ruling, the Italian Justice Ministry will now ask the U.S. Department of Justice to carry out the confiscation of the statue, he said, urging the Getty to resume negotiations on giving it back.

Victorious Youth, which dates from 300 B.C.-100 B.C., was pulled from the sea by Italian fishermen in 1964 off the eastern town of Fano, near Pesaro.

The Italian government, which has been on an international campaign to reclaim looted antiquities, says it was brought into Italy and then exported illegally.

The Getty maintains Italy has no claim, saying it bought the statue in good faith in 1977 for $4 million.

The statue, nicknamed the “Getty Bronze,” is a signature piece for the museum. Standing about 5 feet (1.52 meters) tall, the statue of a young athlete raising his right hand to an olive wreath crown around his head is one of the few life-sized Greek bronzes to have survived, the Getty says.

Though the artist is unknown, some scholars believe it was made by Lysippos, Alexander the Great’s personal sculptor.

In announcing its appeal, the Getty said Thursday’s ruling was flawed procedurally and substantively, noting that a previous case involving the statue was thrown out after the judge held, among other things, that the statute of limitations had expired.

“In fact, no Italian court has ever found any person guilty of any criminal activity in connection with the export or sale of the statue,” the Getty said in a statement.

Fiorilli, the government lawyer, said that wasn’t what was at stake. The trial, he said, concerned property and whether the Getty carried out due diligence in ascertaining the provenance of the work when buying it.

“The Getty wasn’t on trial. It is just the owner of something that was determined to be Italian,” Fiorilli told The Associated Press. “The piece is Italian and the Getty should return it.”

In recent years Italy has successfully won back artifacts it says were looted or stolen from the country and sold to museums and private collections worldwide.

In 2007, the Getty, without admitting any wrongdoing, agreed to return 40 ancient treasures in exchange for long-term loans of other artifacts. Similar deals have been reached with other museums.

Under the 2007 deal, the two sides agreed to postpone further discussion of Victorious Youth until the court case was decided.

Fiorilli urged the Getty to resume negotiations on returning the piece now that the court has pronounced itself.

If U.S. authorities don’t recognize the Pesaro court’s decision and carry out the confiscation order, he said, the Italian government will bring the case to an American court.

The Culture Ministry hailed Thursday’s ruling with “great satisfaction” and said it hoped it would lead to serious reflection by the Getty about returning the statue.

The bronze is believed to have sunk with the ship that was carrying it to Italy after the Romans conquered Greece. After being found in the nets of Italian fishermen trawling in international waters in 1964, it allegedly was buried in an Italian cabbage patch and hidden in a priest’s bathtub before it was taken out of Italy.

The most important work to date that Italy has successfully brought back is the Euphronios Krater, one of the finest ancient Greek vases in existence. The Metropolitan Museum of Art in New York, which bought it for $1 million in 1972 from an art dealer later accused of acquiring looted artifacts, returned it to Italy in 2008.