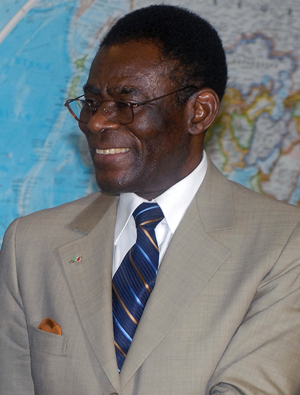 Equatorial Guinea’s President President Teodoro Obiang Nguema, whose son is under investigation by the U.S. government. This file is licensed under the Creative Commons Attribution 2.5 Brazil license.

In what appeared to be a concerted action, France last month seized 11 luxury sports cars belonging to Teodorin Nguema Obiang Mangue, a government minister in the West African country and heir-apparent to the presidency. And a Spanish investigative judge has been asked to seize properties in Madrid and Las Palmas in the Canary Islands owned by President Teodoro Obiang Nguema, his sons and some ministers, acting on a case brought by the Pro-Human Rights Association of Spain.

Teodorin Obiang, who is in his early 40s, used his position to siphon millions of dollars for his own personal use, U.S. authorities said in two civil forfeiture complaints filed in the District Court in Los Angeles and Washington, D.C. The complaints say Obiang’s assets can be forfeited because he engaged in misappropriation and theft of public funds for his benefit.

The U.S. government is seeking to recover $70 million in stolen funds from Obiang for “the benefit of the people of the country from which it was taken.”

“We are sending the message loud and clear: The United States will not be a hiding place for the ill-gotten riches of the world’s corrupt leaders,” said Assistant Attorney General Lanny Breuer.

An email message left for Purificacion Angue Ondo, Equatorial Guinea’s ambassador to the U.S., was not immediately returned. President Obiang has denied charges of corruption in the past. Teodorin Obiang told a South African court in 2005, in a dispute about two Cape Town mansions valued at $4 million, that he earned $4,000 a month as a minister but that in his country it is legal for companies owned by ministers to bid for government contracts with foreign groups and receive “a percentage of the total contract.”

U.S. authorities believe Teodorin Obiang amassed more than $100 million through various schemes while he served as the country’s forestry minister. His current government salary is about $6,800 a month, according to court documents.

The U.S. action follows years of investigations including a Justice Department and Immigration and Customs Department probe that showed Obiang transferred about $75 million into U.S. banks between 2005 and 2007, and indicated U.S. banks had not shown due diligence.

This came after the Obiang fortunes helped bring down the once-venerable Riggs Bank in 2004, when a U.S. Senate Committee investigation found the bank had “turned a blind eye” to evidence it was handling proceeds of foreign corruption in deposits of some $700 million deposited by its biggest customers – Equatorial Guinea government entities, senior officials and Obiang family members. One bank official gave evidence that more than a million dollars was brought to the bank in one instance in cash enfolded in plastic wrap.

Some $26.5 million of that was transferred in suspicious transactions to Banco Santander in Spain, and used to buy properties being investigated there.

Human rights groups including the Global Witness and the Open Society Justice Initiative for years have been asking the United States to deny visas to the Obiang family and seize their property under U.S. laws against unjust or illicit enrichment.

It was unclear why the action suddenly was being taken. A spokeswoman for the Department of Justice, Laura Sweeney, declined to comment “at this time” in an email response to questions. Ken Hurwitz, senior legal officer at the New York-based Open Society Justice Initiative, said he had heard reports that the Malibu property was being put up for sale.

Equatorial Guinea was a backwater until American energy company Exxon Mobil discovered oil and gas there in 1994. U.S. companies continue to dominate the industry there but face growing competition. Most oil from the country, which produces billions of dollars in annual revenue, is exported to the United States.

Despite its newfound wealth, life for the vast majority of the country’s 680,000 people remains a struggle and the majority live below the poverty line with tens of thousands having no access to electricity or clean water, according to U.N. and World Bank figures.

Earlier this year, Global Witness reported that Teodorin Obiang had commissioned plans to build a superyacht costing $380 million – nearly three times what the country spends on health and education each year.

U.S. authorities said Teodorin Obiang spent $30 million on a Malibu mansion, $38.5 million on a Gulfstream jet and about $3.2 million on Michael Jackson memorabilia, including a crystal-covered glove from the “Bad” tour and a basketball signed by the singer and former Chicago Bulls star Michael Jordan.

Among the other items purchased by Obiang, according to federal officials, was a 2011 Ferrari automobile valued at more than $530,000. Obiang also stored 24 luxury cars worth nearly $10 million at the Petersen Automotive Museum in Los Angeles and shipped them to France. Among the supercars seized in France last month are Maseratis, two limited edition Bugatti Veyrons, Maseratis, Ferraris, Porsches and Rolls Royces.

Obiang would give various stories to banks that questioned where he had received large sums of cash from, authorities said. When Obiang opened an account at a California bank in 2007, he claimed that he acquired money from a family inheritance and from trading expensive and custom automobiles, court documents show.