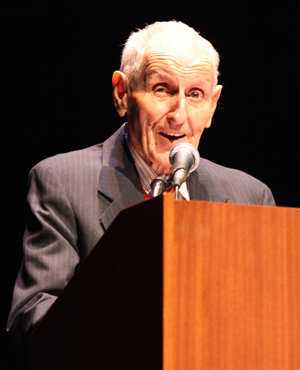 Dr. Jack Kevorkian at a lecture at UCLA in January 1011. Image courtesy of Wikimedia Commons.

BOSTON (AP) – The Armenian Library and Museum of America is refusing to surrender 17 paintings and other artwork by assisted-suicide advocate Dr. Jack Kevorkian, saying he donated them to it and his estate has no right to claim them nearly 12 years after it put them on display.

The paintings, including one Kevorkian did with a pint of his own blood, were among 140 of his personal effects set for auction by his estate next week in New York City.

Kevorkian, who was of Armenian descent, died in June in suburban Detroit at age 83, leaving his property to his niece and sole heir, Ava Janus, of Troy, Mich. The estate estimates that the total value of the paintings being held by the museum is $2.5 million to $3.5 million, spokesman Roger Neal said Wednesday.

Many of the paintings depict death or dying and could provoke or disturb viewers. One of those scheduled for auction is entitled Genocide and features a bloody head being dangled by the hair and held by the hands of two soldiers, one wearing a German military uniform from World War II and the other wearing a Turkish uniform from World War I. Kevorkian painted the head using his blood.

Kevorkian, who spurred on the national right-to-die debate with a homemade suicide machine that helped end the lives of dozens of ailing people, was convicted of murder in 1999 for assisting in the 1998 death of a Michigan man with Lou Gehrig’s disease. He was released from prison in 2007.

Kevorkian also was a keen musician and composer. He loaned the paintings, a collection of his compositions, writings, a sweater and a hat to the museum in 1999 believing the museum would protect them while he served his prison sentence, said his longtime friend and attorney Mayer Morganroth, who’s now his estate’s attorney.

Morganroth said Kevorkian agreed to the arrangement because some of his paintings were previously stolen. He said the deal specified that the terms cannot be modified except in writing and that any amendment must be signed by him and Kevorkian.

But the museum, in Watertown, a small town next to Boston, sued Morganroth earlier this month, asking the Middlesex County Court to declare that the estate has no right to Kevorkian’s work in its vaults and the museum is its sole owner.

The museum argued in the lawsuit that the curator who signed the 1999 deal didn’t consult his superiors and didn’t have the authority to sign the agreement that guaranteed it would return the items.

Morganroth said that argument was “ridiculous.”

“It’s the curator of the museum, and if he didn’t have authority he’d be guilty of fraud to accept the paintings and represent they’d be returned,” he said.

The museum also claimed in the lawsuit that Kevorkian’s sister announced at the reception for the opening of his exhibit in 1999 that he had instructed her to inform the museum that the art was a gift from him.

But Morganroth, of Birmingham, Mich., disagreed.

“She can’t give a gift of somebody else’s property, and she never discussed that with Jack or myself – Jack was in prison, and she lived in Germany, and she didn’t own them,” Morganroth said. “And the original agreement can only be amended by the owner and in writing. … We didn’t give them as a gift.”

The lawsuit claims that Kevorkian attended the opening of a second exhibit after he was released from prison and said that he was “very pleased that he had donated his entire collection” to the museum. A newspaper reported that the physician donated all the items to the museum, according to the lawsuit.

Morganroth said he’s filed a motion to move the lawsuit to federal court, where Kevorkian’s estate would also seek damages of three times the items’ value if the items are not returned before the auction, scheduled for Oct. 28.

Museum attorney Harold Potter said in a statement the museum contends that the paintings were donated to it by Kevorkian, are owned by it, are part of its permanent collection and should remain part of that collection. The museum said it will keep the paintings until the lawsuit is resolved.

Associated Press writer Rodrique Ngowi can be reached at http://www.twitter.com/ngowi