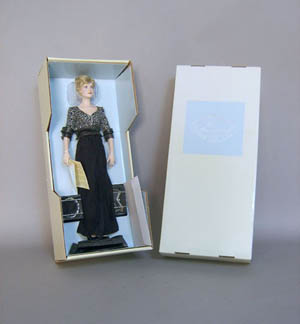 One of the Princess Diana dolls produced by Franklin Mint. Image coutesty of LiveAuctioneers Archive and Pook & Pook Inc.

The settlement was announced Friday by Stewart and Lynda Resnick, whose company, Roll Global, sold the Franklin Mint in 2006. The couple said they would donate the money to charity, as they did with their share of a previous $25 million settlement from The Diana Princess of Wales Memorial Fund.

“We never sought to gain financially from this effort, but we strongly believed in the underlying legal principles in this case and were prepared to see it through,” Stewart Resnick said.

The settlement caps a 13-year legal battle that began in 1998, a year after Diana was killed in a car crash.

The firm Manatt, Phelps & Phillips sued on behalf of the memorial fund, accusing the Franklin Mint of false advertising and diluting the value of Diana’s name with its memorial plates, purses and dolls.

After the suit was dismissed in 2000, the Resnicks countersued.

Manatt’s chief executive officer, William T. Quicksilver, said the law firm still believes it was in the right, but added “it was in the firm’s best interest to settle this matter and put it behind us.”

“We are gratified by the outpouring of public support for the legal positions we asserted, which came from virtually every corner of the legal community,” Quicksilver said.

He also said the company was happy to see the money going to charity and that its own financial position would not be compromised.

The Diana Princess of Wales Memorial Fund, which had been established to hold millions of dollars in contributions made in Diana’s name, settled in 2004.

As the action involving Manatt made its way through the legal system, a Los Angeles Superior Court judge ruled at one point that the law firm did indeed have probable cause to file the original action. A state court of appeals reversed that decision last May.

The year the suit was filed, the company said, the mint’s annual revenue was $620 million. It had plunged to $40 million by 2004, Roll Global said.

“It’s important that someone take a stand against these types of threatening lawsuits that allow lawyers to abuse the legal system and inflict damage on everyone involved,” Resnick said Friday. 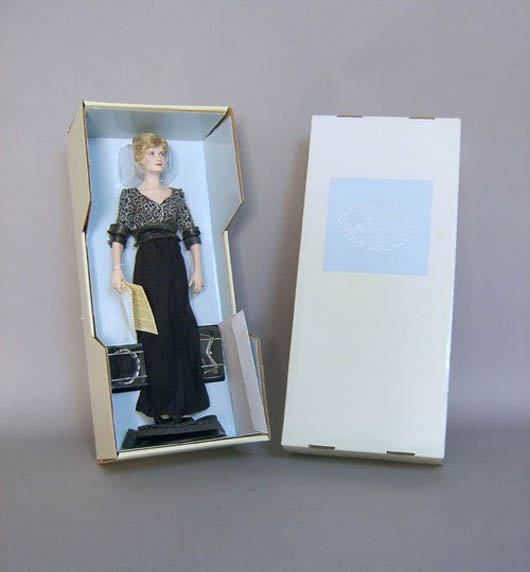 One of the Princess Diana dolls produced by Franklin Mint. Image coutesty of LiveAuctioneers Archive and Pook & Pook Inc.

Ceramics Collector: Gold at the end of rainbow spatterware