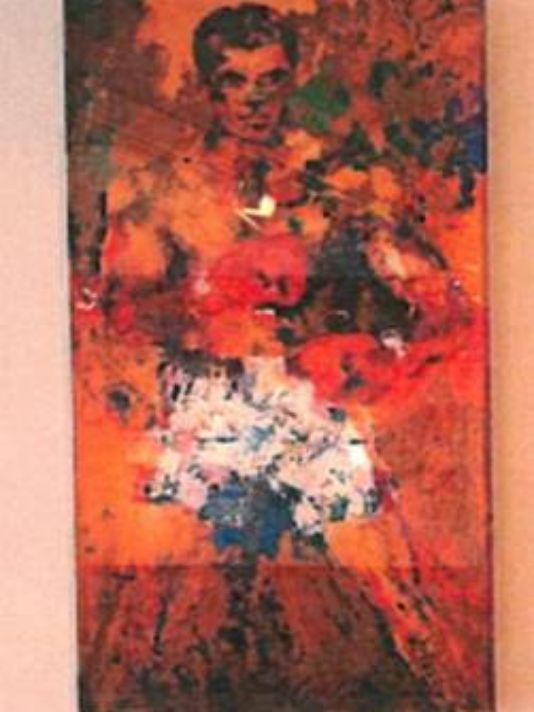 LOUISVILLE, Ky. (AP) – Artwork showing Muhammad Ali in a classic pose, in white trunks and red boxing gloves, was stolen from an exhibit while it was open to the public at the Muhammad Ali Center. Surveillance cameras recorded the brazen theft, and a manhunt was under way for a suspect.

The signed print of a painting by LeRoy Neiman, valued at $5,000, was taken around 1 p.m. EDT Saturday, Louisville police spokesman Dwight Mitchell said Tuesday. He said investigators were trying to locate “a person of strong interest.”

The signed artwork was displayed in the Ali Center’s LeRoy Neiman Gallery when it was taken. The center in Ali’s hometown of Louisville showcases his career as a three-time heavyweight boxing champion and the humanitarian causes he fought for throughout his adult life.

Ali died in June at age 74 after a long battle with Parkinson’s disease.

Ali Center spokeswoman Jeanie Kahnke said it was the first time an exhibit piece had been stolen from the downtown center.

“Additional security measures are already in place to prevent like incidents from occurring,” she said.

Neiman, who died in 2012, was best known for his brilliantly colored images of sporting events and leisure activities. His subjects included a long roster of famous athletes.

Neiman met Ali in 1962 in the dressing room at a New York City arena before a bout, according to the artist’s website, and sketched the young heavyweight sitting on the training table.

“This was the beginning of a long relationship between the artist and the prize fighter,” the website said. “The artist frequently sketched and painted the athlete in training and at his major bouts around the world, constantly sketching, drawing and painting.

Ali often took up the brush himself, and did a number of prediction drawings for Neiman before big fights.”

Collector turning up the volume on antique phonographs
Scroll to top