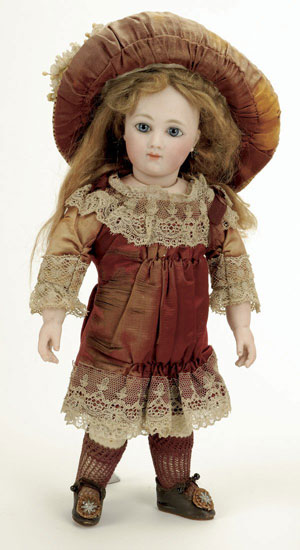 MITCHELL, S.D. (AP) – This month a judge could hear the case of a trust fund established by the founder of the now-closed Enchanted World Doll Museum, a castle-like building across from the Corn Palace in Mitchell.

The museum’s board wants to give about $250,000 in trust fund money to the United Federation of Doll Clubs, which operates a doll museum in Kansas City, Mo.

Dennis Padrnos, a Mitchell lawyer who represents the museum board, said CorTrust Bank – which manages the trust fund – wants to give the money to the South Dakota Community Foundation’s Mitchell Area Charitable Foundation Endowment Fund.

The trust fund was set up by the late Eunice Thomas Reese, who founded the museum with her then-husband, Sheldon F. Reese.

END_OF_DOCUMENT_TOKEN_TO_BE_REPLACED

The 61-year teacher was heading to Thailand when a security official became suspicious of the wrapped figurines that were placed amid souvenir ceramic pots in his suitcase.

When security officials opened the case, they found two mummies of a cat and an ibis, a long-beaked bird, both dating back to 300 B.C. The confiscated collection also included 19 figurines of the revered ancient Egyptian gods of Horus and Thoth, wrapped as gifts. Horus is a falcon-headed god, who represented the greatest cosmic powers for ancient Egyptians. Thoth is believed to have given the Egyptians the gift of hieroglyphic writing.

END_OF_DOCUMENT_TOKEN_TO_BE_REPLACED

WORCESTER, Mass. – (ACNI) A former accounts receivable clerk at Skinner Inc.’s Bolton, Mass., auction gallery was indicted on Dec. 17 in Worcester and charged with the theft of more than $724,000 in cash and goods. Joanne Shea, 72, of Hudson, Mass., faces charges of larceny over $250 and making false entries in corporate books, according to the Office of State Attorney General Martha Coakley.

A well-respected company whose blue-chip sales have achieved several world auction records, Skinner Inc. first contacted Coakley’s office in October 2006, telling them they suspected Shea had been stealing money and merchandise from them over a 13-year period beginning in 1993. A Skinner representative told the State Attorney General’s office that they believed Shea had used a “lapping” scheme that utilized incoming cash payments to cover funds she had previously taken out. An investigation was launched, and details soon began to surface regarding how Shea had engineered the alleged crimes.
END_OF_DOCUMENT_TOKEN_TO_BE_REPLACED

NEWPORT NEWS, Va. (AP) – A former archivist who admitted stealing Titanic items and other artifacts from the Mariners’ Museum will spend four years in a federal prison.

Lester F. Weber had pleaded guilty in June to mail fraud, theft from the Newport News attraction and filing a false tax return. The 46-year-old Weber was sentenced Wednesday in U.S. District Court in Newport News.

END_OF_DOCUMENT_TOKEN_TO_BE_REPLACED

LOS ANGELES (ACNI) – All Richard Hopp says he wants to do is to collect and read books. Yet when he sets up at swap meets and advertises to buy books, enforcement officers of the Los Angeles Police Department’s Pawn Section unit warn him he needs a secondhand dealers permit. Tired of trying to convince them he is a collector and not a dealer doing business, Hopp has filed suit against the city.

“According to Los Angeles Municipal Code, I am not subject or required to obtain or maintain a secondhand dealers permit. I’m not required because the biggest issue is the definition of the word business. I’m not a business,” said Hopp. “How can I be a business when I don’t sell anything.”

END_OF_DOCUMENT_TOKEN_TO_BE_REPLACED

Timothy Conroy of Elbridge already faces a civil action filed by the state attorney general’s office seeking nearly $400,000 related to problems with his auction businesses, TW Conroy and Associates and My Sister the Lister.

In April, Conroy agreed to pay $150,000 to settle past consumer complaints against his company.

Conroy denies the charge and says he didn’t cheat anyone.

END_OF_DOCUMENT_TOKEN_TO_BE_REPLACED

Prosecutors said Concepcion induced customers to buy the forgeries between 2005 and 2007 as he operated in Manhattan and out of the Proarte Gallery in Miami. But Concepcion’s lawyer said the dealer was a law-abiding, dedicated art enthusiast who had not committed any crime.

A criminal complaint unsealed Friday said Concepcion acquired authentic works by the renowned artists and then acquired or commissioned forgeries of the paintings.

Concepcion falsely represented to buyers that the forged versions were genuine or deliberately failed to disclose that they were forgeries, the complaint said.

One victim paid $120,000 and traded a 2004 Bentley to Concepcion to cover the $180,000 price tag of a purported Alexander Calder oil painting titled Red Swirl and dated 1969, prosecutors said in court papers.

The Calder Foundation inspected the canvas and determined it was fake, prosecutors said.

They said the same person had bought about 14 other artworks from Concepcion, and experts determined those also were forgeries.

Defense lawyer Mark Heller said Concepcion had been under investigation for several years and would be exonerated. “I sincerely believe they will not be able to convict him of any crime because his conduct at no time was criminal,” Heller said.

Heller said he was aware of questions about the authenticity of at least one artwork, but he noted that it had been bought and sold by various other dealers on its way to Concepcion.

“Clearly, anything can happen on its way through the marketplace. To persecute and accuse my client when it passed through the hands of other dealers is unfair and makes him a scapegoat,” he said.

NEW YORK (AP) – The widow of a wealthy Manhattan antiques dealer has been indicted for murder in the nearly two- decade-old killing.

Barbara Kogan’s defense lawyer says his client will surrender to authorities Tuesday to face a charge in the shooting death of George Kogan in October 1990.

The 64-year-old widow’s defense attorney, Barry Levin, says prosecutors have no “substantive evidence” to link his client to the death. He says the prosecution’s case is founded on “gossip.”

The Kogans were in the midst of a nasty divorce when George Kogan was slain outside his mistress’ home.

Barbara Kogan was the beneficiary of life-insurance policies worth $4.8 million.

JERUSALEM (AP) – Israeli police say a joint investigation with French colleagues has uncovered 43 watches and clocks stolen from a Jerusalem museum 25 years ago in a legendary heist.

Israeli police spokesman Micky Rosenfeld says the items were found in two French bank vaults. He says they will be transferred to Israel in the coming weeks.

French police officials did not immediately comment on the announcement Wednesday.
The items were among 106 timepieces worth millions of dollars that disappeared from the L.A. Mayer Museum for Islamic Art in Jerusalem in 1983.

The theft was the costliest in Israel’s history. More than 40 other items were recovered before the latest discovery.

Israeli police traced the heist back to a notorious thief who fled the country and died in the U.S. in 2004.

NEW YORK (AP) – The estate of a Macy’s heir has sued Jay Leno and others, saying the Tonight Show host was illegally sold a valuable automobile at a sham auction.

The lawsuit, filed in Manhattan on Oct. 14, said Leno coveted the late John W. Straus’ 1931 Duesenberg for years and tried to buy it, but Straus wasn’t willing to sell.

Quoting a 2007 book about car collecting called The Hemi in the Barn, the lawsuit said Leno wanted the Duesenberg so badly that he tried to discourage other buyers by spreading around an erroneous rumor that the car couldn’t be moved from the garage where it had been parked for more than 50 years.

Court papers said Straus paid everything he owed to store the Duesenberg and a 1930 Rolls Royce, but the garage owners claimed they were due money and auctioned the cars off in May 2005. The lawsuit depicted the auction as a sham designed to wrest the cars away from Straus while he was ill.

Leno “knew that the purported auction was conducted in violation” of state law but bought the Duesenberg for $180,000, the court papers said. They claimed the car was worth $1.2 million.