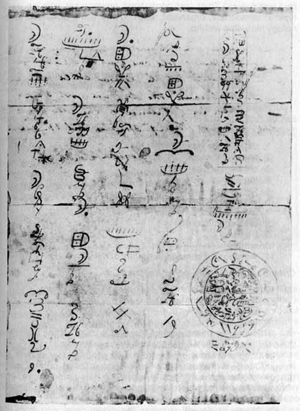 Photo of the forged ‘Reformed Egyptian’ document, which Hofmann claimed he found the document folded inside a 17th-century King James Bible. He proposed it was handwritten by Joseph Smith, Morman Church founder. Image courtesy of Wikemedia Commons.

SALT LAKE CITY (AP) – Decades after Mark Hofmann pleaded guilty to murder and the Mormon documents he had pitched as historic were exposed as forgeries, an audiotape has surfaced that gives a glimpse of the swindler at work.

The 1981 recording details Hofmann’s attempt to negotiate or trade for a supposed original copy of a blessing written by Mormon church founder Joseph Smith Jr. to leaders of what was then known as the Reorganized Church of Jesus Christ of Latter-day Saints in Missouri.

On the recording, Hofmann tells a church archivist the document is dated Jan. 17, 1844, and lays out a plan of succession in the Mormon church that hands the presidency of the church to Smith’s son.

A genuine document would be valuable to the RLDS church because Joseph Smith III became the faith’s first president.

“I’m not sure really how much something like this is worth here,” Hofmann says on the recording. “But I know if it’s worth anything to anybody, it must be the reorganized church.”

The entire recording will be played for the first time publicly at the annual Sunstone Symposium on Aug. 4 at Weber State University in Ogden, Utah. It was previewed at a news conference on Friday by Sunstone organizers.

It’s not known if the tape, which includes four telephone calls, is the only one of its kind in existence.

“I’m pretty sure that if he did one, he did others, but whether he kept them or destroyed them we really don’t know,” said Steve Mayfield, a collector with more than 100 scrapbooks of Hofmann memorabilia who will lead the Sunstone presentation.

The tape was discovered by Provo attorney and collector Brent Ashworth in a trove of Hofmann memorabilia that he purchased from another collector.

Ashworth, who also owns a small store that sells rare books, estimates that he purchased nearly a $500,000 in forgeries from Hofmann back in the 1980s and said he was surprised to hear the bumbling, folksy sales pitch when he finally listened to the tape.

“He had a great act,” Ashworth told The Associated Press. “He was very methodical, very low key, very country bumpkin, acting like he didn’t really realize the important of the document.”

Ashworth donated the original recording to the Mormon Church archives in 2007. He said he’d had the tape for nearly 20 years, but never listened to it until 2009.

The Hofmann forgeries and bombings are considered by many to be one of the most significant events in modern Mormon church history.

“They were the first known bombing deaths in Utah,” said Ashworth, a former prosecutor. “It had us all on the edge of our seats for a while.”

In 1987, Hofmann pleaded guilty to two counts of second-degree murder and remains in Utah State Prison after he made and detonated three pipe bombs in Salt Lake City to cover his tracks

Two people were killed by bombs delivered to homes and businesses. Hofmann injured himself when a third bomb went off in his car.

Most of his money came from recreating works of figures from the early history of the Utah-based Church of Jesus Christ of Latter-day Saints.

Over a seven-year period, Hofmann, himself a Mormon, used his meticulous artistic skills to go from a struggling college student in 1978 to a 30-year-old document dealer making millions from collectors nationwide.

Among his clients were renowned historians and church leaders, including former Mormon president Gordon B. Hinckley.

Hofmann’s schemes and deceptions began to go wrong in 1985, however, after some collectors became suspicious and banks that lent him large sums of money began to press for repayment.

Mayfield, who has worked for the Salt Lake City Police Department crime lab for nearly 20 years, said he was fascinated by the tape and hopes others will be too.

“This is history actually happening before you,” Mayfield said.

Mayfield and Ashworth have already played the tape for state and federal law enforcement agencies in Utah.

“I thought it would be of interest,” Ashworth said. “This guy was one of the super con men of Utah history and this is him, doing his con, doing his thing. 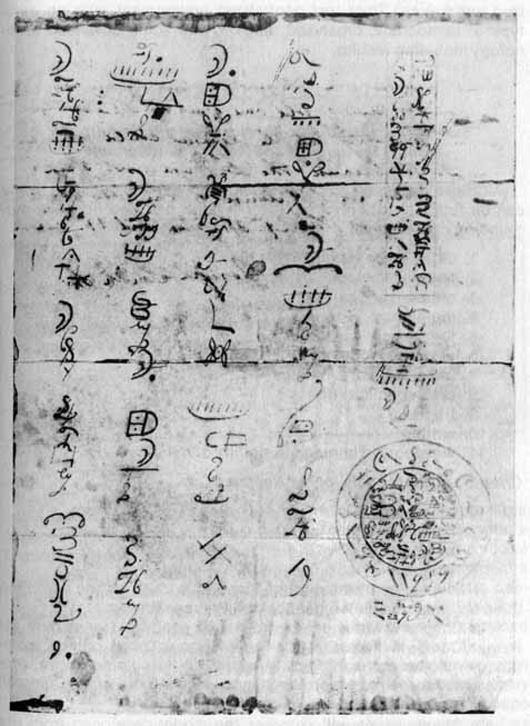 Photo of the forged ‘Reformed Egyptian’ document, which Hofmann claimed he found the document folded inside a 17th-century King James Bible. He proposed it was handwritten by Joseph Smith, Morman Church founder. Image courtesy of Wikemedia Commons.

Among lottery ticket collectors everyone’s a winner
Scroll to top