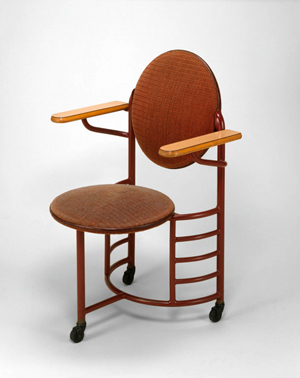 Frank Lloyd Wright-designed chair for the Johnson Wax Headquarters, manufactured by Steelcase Inc. Image courtesy of the Art Institute of Chicago. Copyright 2014 Frank Lloyd Wright Foundation / Artists Rights Society (ARS), New York. It is believed that the use of this low-resolution images qualifies as fair use under United States copyright law.

MILWAUKEE (AP) – A desk and chair designed by Frank Lloyd Wright has been returned to home products giant SC Johnson as part of a settlement with a California man who had planned to auction the distinctive and valuable furniture, a company spokesman said Tuesday.

SC Johnson, which is based south of Milwaukee in Racine, sued Sotheby’s auction house and Thomas Figge, of California, after the auction house listed the furniture for sale in 2013.

Wright designed SC Johnson’s Administration Building in the 1930s and created furnishings for it. The desk made of enameled steel and American black walnut has horizontal “speed” lines that give it a unique, streamlined look, according to court documents. It is painted a deep red and has rounded drawers that swing outward in a cascade. The blue upholstery on the accompanying chair indicates it was used in the company’s records department, the documents said.

The chair and desk were among multiple copies produced for SC Johnson. The company said in its lawsuit that it has not sold or loaned any items designed by Wright except in a few, well-documented cases to museums. It said it had no record of a gift to the people named in the ownership history provided by Sotheby’s, believed the items rightfully belonged to SC Johnson and wanted them returned.

Court documents show the lawsuit was dismissed Oct. 8 because a settlement had been reached. The terms weren’t disclosed, but SC Johnson spokeswoman Jam Stewart said in an email to The Associated Press that the company got the furniture back.

“Frank Lloyd Wright designed furniture is an important part of our company’s legacy,” Stewart wrote. “The furniture was designed in 1938-39 as part of Wright’s vision for the Administration building. We are happy that chair and desk have been returned to SC Johnson and our legacy has remained intact.”

Figge’s attorney, John Cahill, declined to comment on the settlement. Figge bought the furniture in 2002 from a previous owner, according to court documents.

SC Johnson offers tours of two Wright-designed structures, the Administration Building, where examples of the architect’s furnishings can be seen, and the Research Tower, where products including Raid bug killer, Glade air freshener, Off insect repellant and Pledge furniture polish were created. 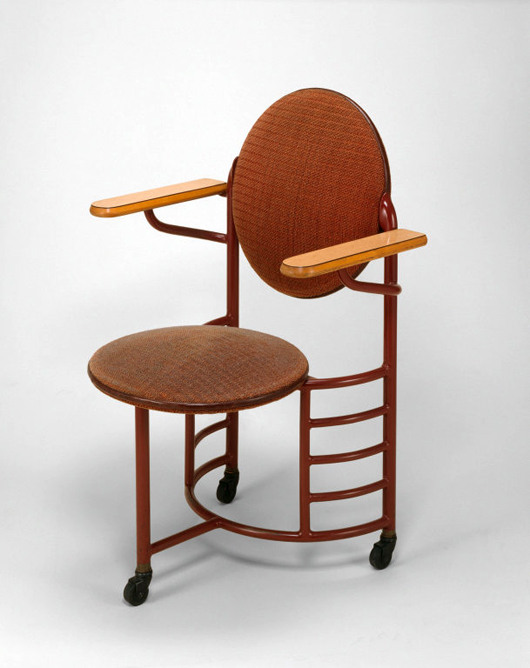 Frank Lloyd Wright-designed chair for the Johnson Wax Headquarters, manufactured by Steelcase Inc. Image courtesy of the Art Institute of Chicago. Copyright 2014 Frank Lloyd Wright Foundation / Artists Rights Society (ARS), New York. It is believed that the use of this low-resolution images qualifies as fair use under United States copyright law.