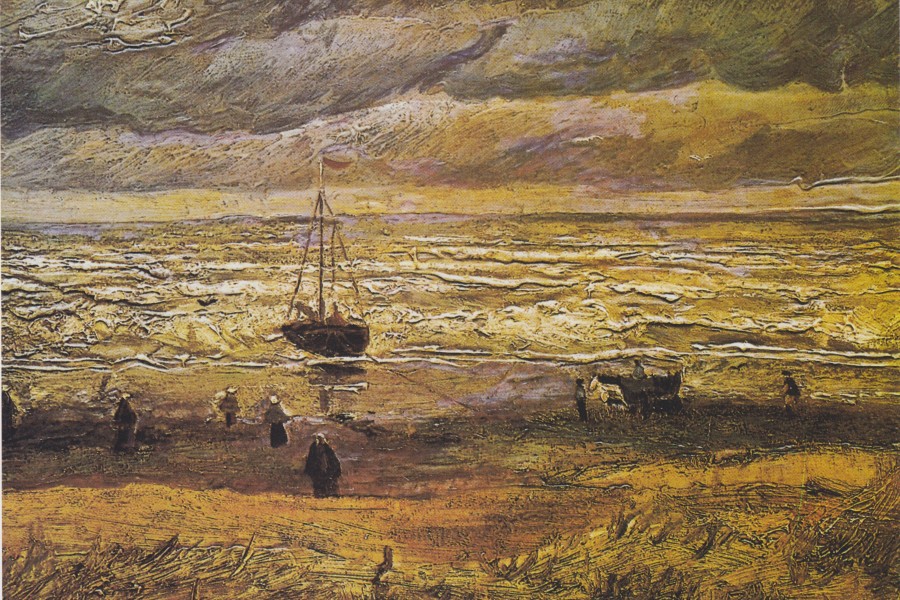 ‘Seascape at Scheveningen’ (1882) is one of two Van Gogh paintings stolen from the Amsterdam museum in 2002. Image courtesy of Wikimedia Commons

AMSTERDAM (AP) – Two paintings by Vincent van Gogh that were stolen in a smash-and-grab heist more than 14 years ago went back on display Tuesday at the Amsterdam museum dedicated to the Dutch master.

“They’re back,” said Van Gogh Museum director Axel Rueger, calling their return one of the “most special days in the history of our museum.”

The paintings, the 1882 View of the Sea at Scheveningen, and 1884-85 work Congregation leaving the Reformed Church in Nuenen, were discovered last year by Italian police investigating suspected Italian mobsters for cocaine trafficking. 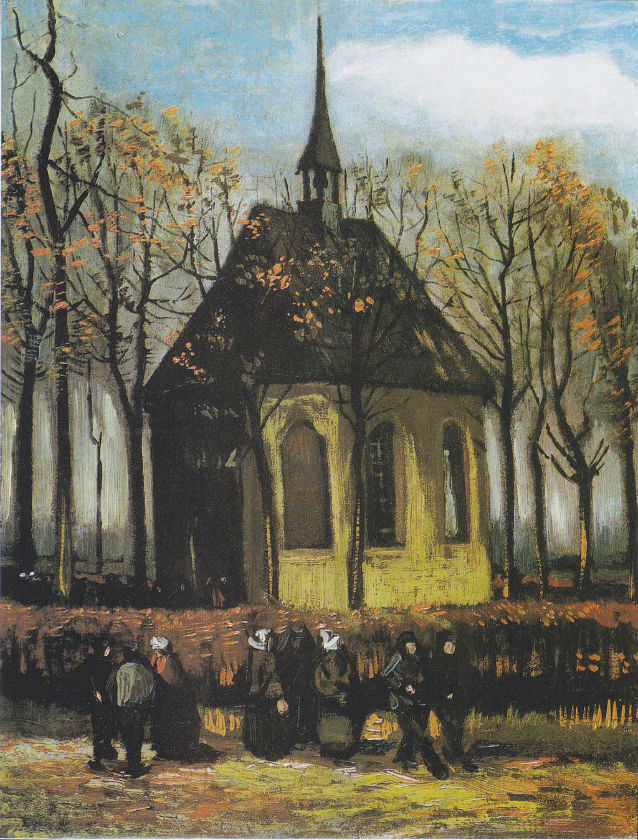 ‘Congregation leaving the Reformed Church in Nuenen’ remained missing for over 13 years, until it was recovered by authorities near Naples in January 2016. Image courtesy of Wikimedia Commons

It wasn’t an easy find. The two paintings were wrapped in cotton sheets, stuffed in a box and hidden behind a wall in a toilet, said Gen. Gianluigi D’Alfonso of the Italian financial police, who was on hand at the museum for the ceremonial unveiling.

The paintings were found in a farmhouse near Naples as Italian police seized 20 million euros ($21.6 million) worth of assets, including villas, apartments and even a small airplane. Investigators contend the assets are linked to two Camorra drug kingpins, Mario Cerrone and Raffaele Imperiale.

“After years shrouded in darkness, they can now shine again,” said Jet Bussemaker, the Dutch minister for education, culture and science said as an orange screen slid away to reveal the two paintings behind a glass wall.

One of the two men convicted of stealing the paintings told the Dutch newspaper De Telegraaf that said he originally wanted to steal Van Gogh’s world famous Sunflowers painting, but it was too well protected.

Another well-known Van Gogh work, The Potato Eaters, was too big to get through the hole that Octave Durham and his accomplice smashed in the security glass to get into the museum after clambering over a fence and using a ladder to get onto its roof.

Durham, who was sentenced to 3 1 /2 years in prison after being convicted in 2004, told De Telegraaf that the paintings were sold to the mafia after a Dutch criminal who had agreed to buy them was murdered.

The paintings are now back on display at the museum before being taken to its conservation studio for repair. Experts said they suffered remarkably little damage even as the thieves in 2002 ripped them out of their frames and fled.

It is not only a miracle that the works have been recovered but it’s even more miraculous almost that they are in relatively unharmed condition,” Rueger said.

The museum director was on vacation when the call came last year from Italian authorities who believed they had recovered the paintings. He didn’t celebrate right away; he’d had calls like this before.

“I was hopeful but also a little hesitant, because over the course of the years we had multiple occasions when people phoned us, contacted us, claiming that they knew something about the whereabouts of the works. And each time it was false, the trace went cold,” he said. “The way has been peppered with disappointment.”

But museum experts dispatched to Italy to check the authenticity of the works quickly turned Rueger’s doubts into delight.

“It was something we had secretly been hoping for, for all those years,” he said.

The two small works are not typical of Van Gogh’s later and better-known works, but are still vital pieces for the museum’s collection, Rueger said.

The Scheveningen seascape, with a fishing boat and rough sea under a typically gray, cloudy Dutch sky, is one of Van Gogh’s earliest works. It is the only painting in the museum’s collection painted during his time in The Hague. It suffered a missing rectangular chip from the bottom left-hand corner.

The painting of the church in Nuenen portrayed the village where his parents lived.

“He had painted as a gift to his mother, so it’s a very personal and emotional connection,” Rueger said.

Rueger said the paintings are now back for good at a museum, which is home to dozens of works by Van Gogh, whose paintings fetch millions of dollars on the rare occasions they come up for auction.

“The security, I can assure you, is of Triple-A quality now. So I’m very confident that everything is safe in the museum,” he said.
___