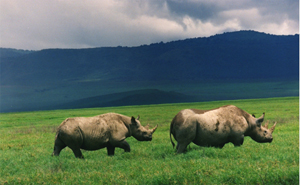 WASHINGTON (AP) – Three people have been charged with participating in an international smuggling ring that traffics in the horns of endangered black rhinos.

The U.S. Fish and Wildlife Service and Justice Department have launched “Operation Crash” using undercover agents and electronic surveillance in an effort to stop the black market trade in rhino horns, which has led to poaching and has reduced the world’s rhino population by more than 90 percent since 1970. The operation is named after the term for a rhino herd.

This week, federal grand juries in Newark, N.J., and Miami indicted Zhifei Li, a 28-year-old Chinese national, for alleged smuggling. He allegedly conspired to smuggle more than 20 raw rhinoceros horns from the U.S. to Hong Kong in 2011 and 2012. Shusen Wei was charged with offering to bribe a federal agent in the Li case. In New York, a third man, Qing Wang, was charged Wednesday for allegedly smuggling libation cups carved from rhinoceros horns from New York to Li via Hong Kong.

According to documents unsealed Wednesday, Wang was one of several who purchased items in the United States for Li. In China, there is a centuries-old traditional belief that drinking from the intricately carved rhinoceros horn cups brings good health. Such carvings are prized by collectors. Wang also is alleged to have smuggled ivory carvings to Li in Hong Kong.

According to an indictment in Newark on Monday, Li wired hundreds of thousands of dollars over at least a year to a co-conspirator in the United States to buy rhinoceros horns. Li’s co-conspirator smuggled the rhino horns in porcelain vases and mailed them to Hong Kong and China to a person other than Li to evade detection by U.S. officials. Li was arrested in January on charges previously filed in New Jersey.

Li also was indicted Tuesday in Miami on wildlife trafficking and smuggling charges. According to court records and government statements in court, shortly after arriving in Florida in January 2013 for the Original Miami Beach Antique Show, Li purchased two endangered black rhinoceros horns from an undercover U.S. Fish & Wildlife Service agent in a Miami Beach hotel room for $59,000. Li asked if the undercover officer could procure additional horns and mail them to his company in Hong Kong.

Also arrested on a related criminal complaint in Miami was Shusen Wei, a Chinese business executive, who also attended the antique show and shared a hotel room with Li. According to court documents in Miami, Wei admitted to agents after Li’s arrest that he knew about Li’s smuggling and had purchased rhinoceros carvings from Li that apparently had been smuggled from the United States.

After being served with a grand jury subpoena to appear in New Jersey, Wei left Miami for New York en route to China. Prior to leaving Miami, Wei allegedly asked an undercover informant to invite a Fish and Wildlife Service agent to dinner in Miami and offer her as much as $10,000 to assist Li, according to court documents. After a series of recorded phone calls and text messages, Wei was arrested as he attempted to board a flight bound for China at JFK International Airport in New York on Feb. 3 on charges of bribing a federal official.

All species of rhinoceros are protected under U.S. and international law, and all black rhinoceros species are endangered. Plant-eaters of prehistoric origin, rhinos have no known predators other than humans.

In South Africa, some reserves post signs telling would-be poachers that they have de-horned the rhinos. The reserves do so because they don’t want the animals killed for their horns.

South African authorities say at least 96 rhinoceros have been killed so far this year, as rampant poaching for their horns to sell to buyers in Asia continues. The statistics show the majority of the killings continue in the expansive Kruger National Park in South Africa’s northeast.

From the 1990s to 2007, rhino killings in South Africa by poachers averaged about 15 a year. However, the number has soared as buyers in Asia now pay the U.S. street value of cocaine for rhino horn. The poaching of live rhinos in South Africa rose from 13 in 2007 to more than 618 in 2012.

Rhino horn is made of keratin, a tough protein found in human fingernails. There’s a belief in Asia that taking ground-up horn cures diseases. However, no medical evidence supports that.

Since 1976, trade in rhinoceros horn has been regulated under the Convention on International Trade in Endangered Species of Wild Fauna and Flora, a treaty signed by more than 175 countries to protect fish, wildlife and plants that are or may become imperiled as a result of demand in international markets.

Nevertheless, the demand for rhino horns and black market prices have skyrocketed in recent years. 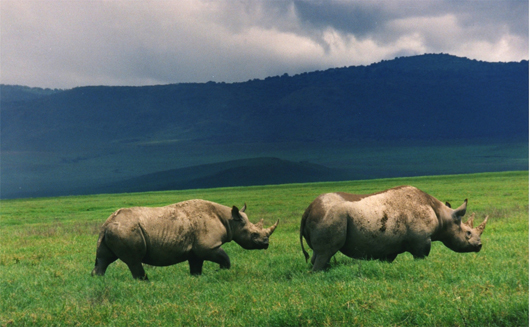