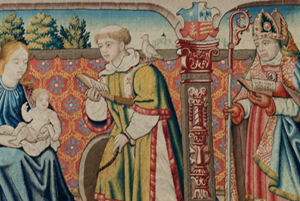 This 16th century tapestry was stolen in December 1979 from a cathedral in the Aragon region in northeastern Spain. It recently was discovered in Houston. Image courtesy ICE.gov.

WASHINGTON (AFP) – A 16th century religious tapestry stolen from a Spanish cathedral in 1979 and sold at auction three years ago for $369,000 was returned to Spain on Wednesday by the U.S. customs service.

In a statement, U.S. Immigration and Customs Enforcement said special agents from its Homeland Security Investigations unit seized the artifact last November from the unidentified Texas business that had bought it.

The wool and silk tapestry, depicting the Virgin Mary and baby Jesus, had been stolen in December 1979 from the Cathedral of Saint Vincent, Martyr of Roda de Isabena in the Aragon region of northeastern Spain.

After it turned up in a Brussels art fair catalog in 2010, Belgian, Spanish and U.S. investigators established it had been acquired in 2008 by a gallery owner in Belgium along with two partners from Milan and Paris.

“Today’s repatriation is an example of what can be accomplished when law enforcement partners from around the world work together in the effort to ensure that stolen and looted priceless cultural objects like this are returned to their rightful owner,” said ICE director John Morton.

Madrid’s ambassador to Washington Ramon Gil-Casares accepted the tapestry on behalf of his nation at a ceremony at his residence.

Since 2007 more than 6,600 artifacts—including paintings from Europe, manuscripts from Peru and cultural artifacts from China, Cambodia and Iraq—have been returned by the United States to 24 countries, according to ICE. 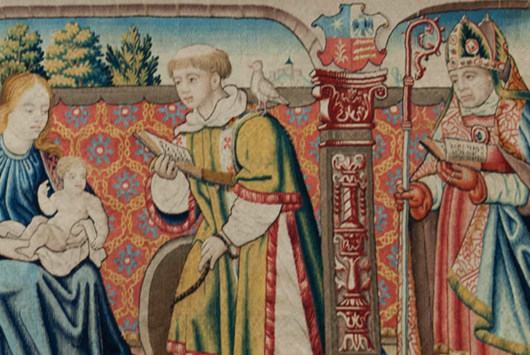 This 16th century tapestry was stolen in December 1979 from a cathedral in the Aragon region in northeastern Spain. It recently was discovered in Houston. Image courtesy ICE.gov.