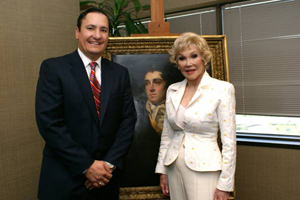 HOUSTON – Every year, hundreds of items are stolen from antique stores, collector’s homes and even museums. Perhaps the most famous art theft occurred in 1911 when the Mona Lisa was stolen from the Louvre in Paris by an employee, only to be recovered two years later. The largest art theft in world history took place in Boston on March 8, 1990. Thieves broke into the museum and stole 13 works worth $300 million or more. To date, they have not been found.

Recovery of items does not happen often, and if it does, it can take years – something Houston socialite and philanthropist Joanne Herring recently experienced when a painting by Scottish artist, Sir Henry Raeburn was returned to her after being stolen over 25 years ago.

It all started when her Houston home was being restored. Herring had been a collector of 18th century artists to line the walls of her home. Most of her collection had been purchased from auction houses such as Christie’s, Sotheby’s and Doyle’s in New York. While the house was filled with contractors, her secretary relocated her art to Herring’s son’s apartment. At some point, several of the works went missing.

Herring filed a police report shortly after the theft (in 1986) and waited. One of the paintings turned up at auction in London just six months after it was stolen. Unfortunately, Herring did not act quickly enough, and the painting went missing again.

Fast forward to 2009 when she received a call from Christopher A. Marinello, executive director and general counsel of the Art Loss Register Inc., a firm retaining a database of stolen and missing works of art. Lo and behold, her painting had turned up again in New York at Sotheby’s auction house.

Portrait of a Man by Sir Henry Raeburn, had been consigned by Geoffrey Rice. Rice claimed he had purchased the painting in the mid 1980s from a Houston auction house, Hart Galleries. Rice, however, had no proof of this claim. Herring on the other hand came armed with her original receipt from Christie’s where she purchased the painting in 1980, along with a copy of the 1986 police report.

The painting was pulled from auction, but this was far from over. Rice had refused to cede ownership of the painting, therefore Sotheby’s could not release it to Herring without a court order.

One can only assume Rice thought Herring would go away without a fight. Anyone knowing Herring would know that would never be the case. Before long, Herring had attorney Mike Lowenberg on the case—pro bono.

The media caught wind of the story and The New York Post began calling it “Charlie Wilson’s Art War” in reference to Charlie Wilson’s War, the film featuring Tom Hanks and Julia Roberts, inspired by Herring’s relationship with the late Texas congressman and their role in funding Mujahideen fighters in Soviet-occupied Afghanistan.

The case was set to be heard Jan. 3, 2011. After three years of fighting, she was going to have her day in court in hopes of having the painting returned to its rightful owner. As Herring was making her way to the courthouse, she received a call stating Rice had agreed to return the painting.

The Raeburn finally made its way back to Houston in August. Herring, Lowenberg and Corbett Parker (general counsel for Herring) had the pleasure of uncrating the painting, and toasting the return of an “old friend.”

Herring is now hoping another art enthusiast might have interest in acquiring the painting. She plans to put it up for sale, with all proceeds going to her nonprofit organization assisting Afghan villages with clean water, sustainable food sources, modern schools and jobs and basic health care.

Herring also has a new book out titled Diplomacy and Diamonds: My Wars from the Ballroom to the Battlefield available in stores in October and online now. 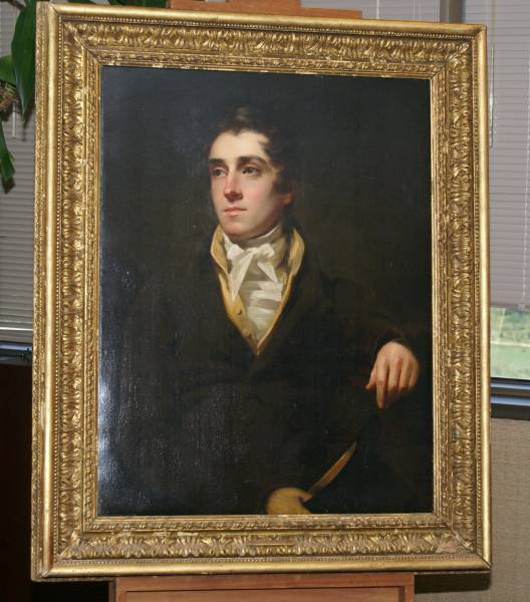 ‘Portrait of a Man’ by Sir Henry Raeburn.

In Memoriam: Bob Cassilly, sculptor and entrepreneur, 61
Scroll to top