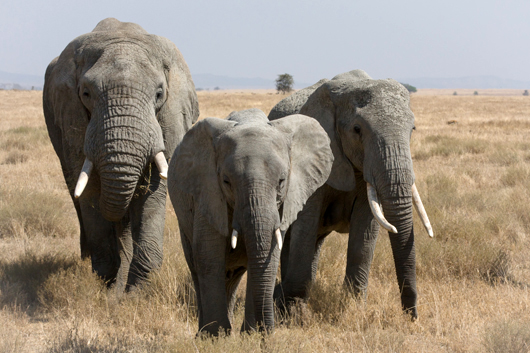 Despite the global embargo on elephant ivory that has been in place since 1990, the rate of elephant slaughter for tusks is at the highest point in a decade. In this picture, three female African bush elephants travel in Tanzania. Photo by Ikiwaner, taken July 29, 2010, licensed under the terms of the GNU Free Documentation License, Version 1.2.

TOKYO (AP) – Yahoo Japan said Wednesday it is strengthening policing of illegal ivory on its online commerce site as criticism grows it is supporting a trade that fuels the slaughter of wild elephants.

A spokeswoman for the company said it prohibits sales of raw ivory and ivory products that breach a 1989 treaty largely banning the trade. Enforcement is a challenge since Japan allows the sale of old ivory such as ornaments that were produced before the treaty came into effect.

“Since there is a chance some sales may be illegal we are strengthening our policies. If we find a sale was illegal we cancel it straight away,” Takako Kaminaga of Yahoo Japan’s public relations office said. “We ‘patrol’ 24 hours a day.”

She said Yahoo Japan, which is part owned by Yahoo Inc. and Softbank Corp., does not restrict sales of ivory that do not violate the law.

Nearly 1.1 million people have endorsed an online petition by environmental groups aimed at pushing Yahoo Japan to stop its sales of ivory products.

Various other online commerce sites, such as Amazon, say they have already stopped such sales or advertising.

Raw ivory is sought after for making ornate traditional seals and other decorative items. Poachers kill tens of thousands of elephants a year to meet demand for the material, despite the trade ban, according to the Convention on International Trade in Endangered Species and other groups.

The group also said that the Yahoo Japan Auctions site sold more than 12 tons of ivory products, including whole elephant tusks, in 2012-2014. That site and others feature thousands of ads for ivory and ivory products.

“As global citizens, we are appalled that you allow ivory to be sold on your site/platform, fuelling elephant extinction,” it says.

“We call on you to urgently stop all ivory sales from sites/platforms in Japan and all other markets.”

Softbank said in a statement that it had no comment on the issue.

Kaminaga, of Yahoo Japan, said the company was in touch with the Environment Ministry and other agencies on the issue and with Yahoo and other shareholders.

“You can’t say there’s absolutely no intention to change,” she said when asked if Yahoo Japan might alter its stance on the issue.

In September, the United States and China agreed to work toward nearly complete bans on the ivory trade, and Japan is increasingly isolated in its stance favoring continued sales.

EIA, the conservation group, contends that widespread use of fake documents has enabled traders to “legalize” more than 1,000 tusks a year since 2011.

Individually owned tusks face no registration requirement in Japan, and the tusks are not marked in any way to ensure that the documents are valid for the items being registered.