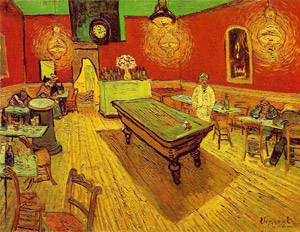 NEW HAVEN, Connecticut (AP) – The ownership of tens of billions of dollars of art and other goods could be thrown into doubt if a lawsuit seeking the return of a famous Vincent Van Gogh painting is successful, according to a court filing by Yale University.

The university sued in federal court in March to assert its ownership rights over The Night Cafe and to block a descendant of the original owner from claiming it. Pierre Konowaloff is the purported great-grandson of industrialist and aristocrat Ivan Morozov, who bought the painting in 1908.

Russia nationalized Morozov’s property after the Communists seized power. The painting, which the Soviet government later sold, has been hanging in the Yale University Art Gallery for almost 50 years.

“Invalidating title to the painting would set U.S. courts at odds with the Russian government and cloud title to what Konowaloff concedes is at least $20 billion of art in global commerce,” Yale’s attorneys wrote in court papers filed Wednesday.

It also would “imply the invalidity of title to countless billions of dollars more of other sorts of property expropriated and sold” by Russian authorities, Yale’s attorney wrote.

Any federal court invalidation of Russian nationalization decrees from the early 20th century would create “significant tensions” between the United States and the Russian Federation, Yale argues. Russia continues to possess, display and defend its title to many artworks that were nationalized, including against Konowaloff’s litigation and threats of litigation in France and Britain, Yale says.

Yale says the court does not have the authority to evaluate the legality of a Russian nationalization. The university says former owners have challenged titles to artwork and other property seized from them in Russia, but their claims were rejected by the U.S. Supreme Court and state, federal and foreign courts.

Konowaloff’s attorney, Allan Gerson, said in an e-mail that the argument was “ridiculous” and that the lawsuit was not against Russia. He has argued that the court does not have to determine the lawfulness of the Russian confiscation of the painting, saying Yale cannot establish that it has good title.

Yale received the painting through a bequest from Yale alumnus Stephen Carlton Clark. The school says Clark bought the painting, which shows the inside of a nearly empty cafe, with a few customers seated at tables along the walls, from a gallery in New York City in 1933 or 1934.

Konowaloff has filed court papers calling Yale’s acquisition of the painting “art laundering.” He argues that Russian authorities unlawfully confiscated the painting and that the United States deemed the theft a violation of international law.

Konowaloff alleges Clark knew of the painting’s ownership history and that “Yale engaged in a policy of willful ignorance” when it accepted the piece in 1961. Konowaloff wants the immediate return of the painting as well as damages.

Yale says the Russian nationalization of property, while sharply at odds with American values, did not violate international law. The university also says Konowaloff’s claims should be dismissed because they are time-barred by a statute of limitations.

Konowaloff said he became the official heir of the Morozov collection after his father died in 2002, and he began to try to document the inventory. He said his grandfather did not try to do so “for reasons of personal security and due to the lack of any available judicial remedies at the time.”