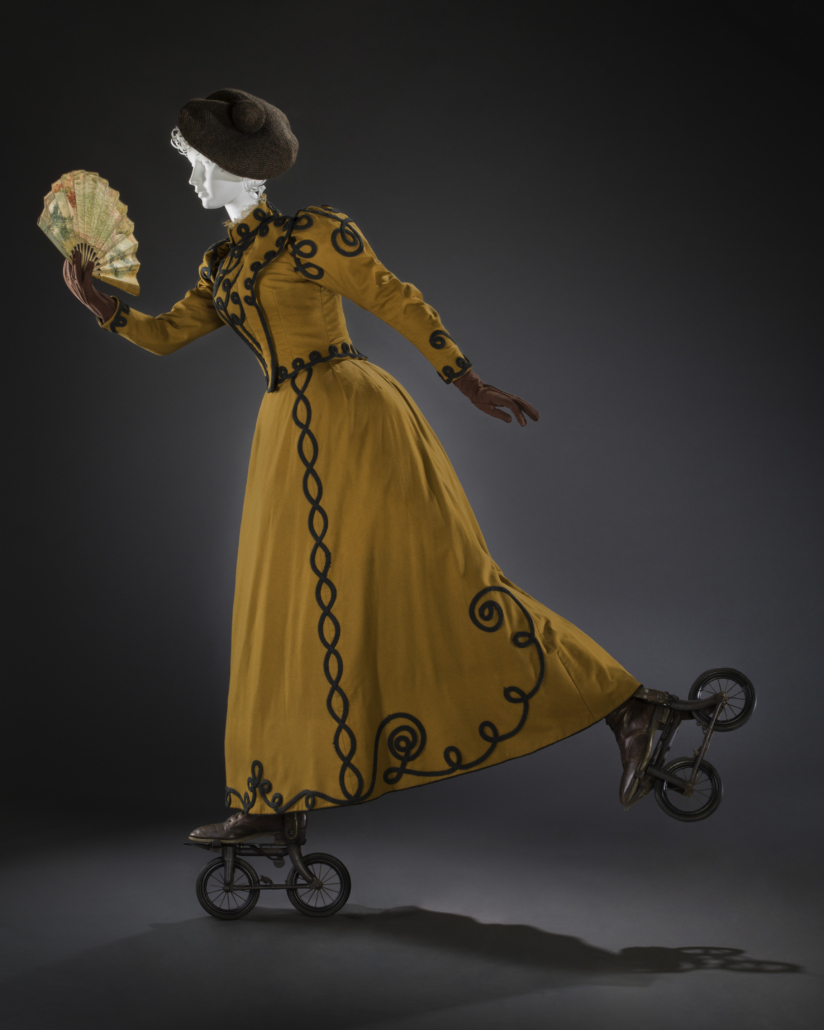 PITTSBURGH ─ The Frick Pittsburgh is pleased to be the debut venue for the presentation of Sporting Fashion: Outdoor Girls 1800 to 1960, organized by the American Federation of Arts (AFA) and the FIDM Museum at the Fashion Institute of Design & Merchandising, Los Angeles. The first exhibition to explore the evolution of women’s sporting attire in Western fashion during this 160-year period, Sporting Fashion presents 64 fully accessorized ensembles comprised of more than 480 historic objects selected from the exceptional collections of the FIDM Museum. It opened July 3, continues through September 26, and includes garments and accessories from long-established sportswear brands such as Champion, Pendleton, Spalding, and Stetson, in addition to garments and accessories from key fashion brands such as Abercrombie and Fitch, Balenciaga, Chanel, Patou, and Pucci.

“It’s an absolute delight to share this fascinating presentation of women’s activewear with a range of museum audiences,” said Pauline Willis, Director and CEO of the American Federation of Arts. “Covering athletic pursuits from fencing to motorcycling, Sporting Fashion: Outdoor Girls 1800 to 1960 offers valuable insight into the cultural, economic, and technical motives behind women’s sporting attire. As dialogues regarding women’s parity in athletics continue, Sporting Fashion enriches the conversation, illustrating the dynamic ways that modern women engaged in sport during the 19th and 20th centuries.” 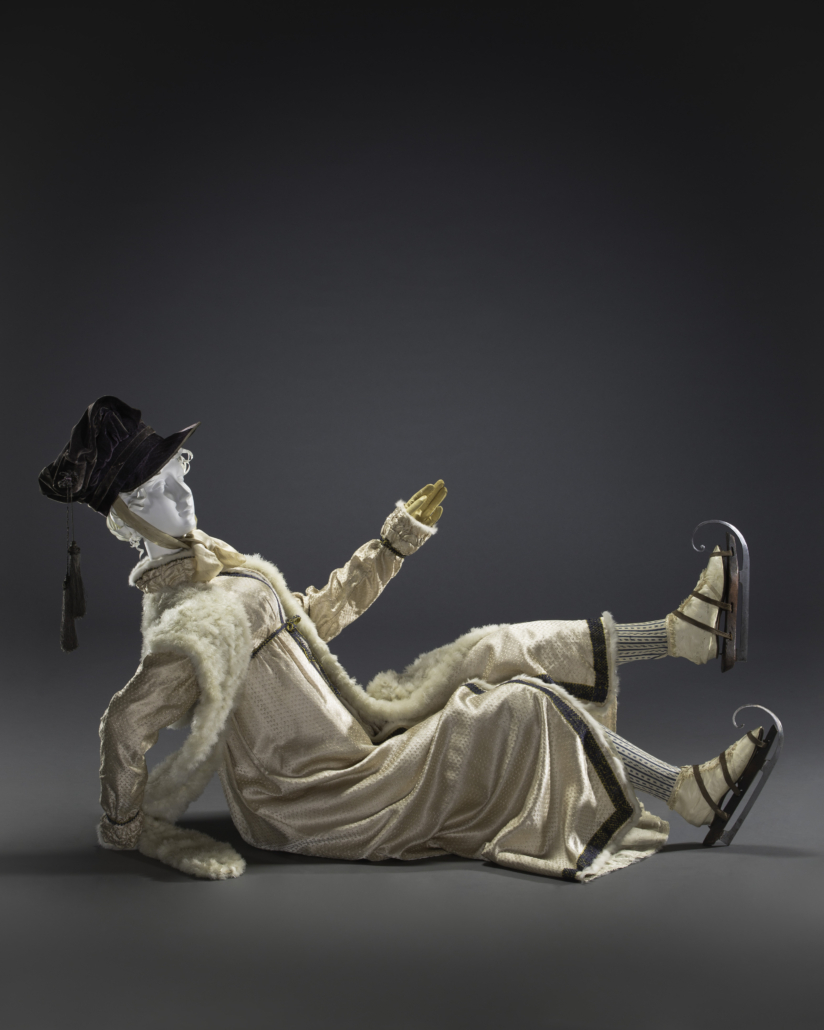 “All of us at the Frick feel tremendously excited to serve as the opening venue of this groundbreaking exhibition,” remarked Elizabeth Barker, Executive Director of The Frick Pittsburgh. “Sporting Fashion assembles a stunning series of costumes to tell the story of women’s and girls’ participation in sports since the early American Republic, revealing the momentum that would lead to Title IX—and by extension, present-day professional women’s athletics. So many of the challenges and victories that female athletes faced in the past still resonate with us today.” 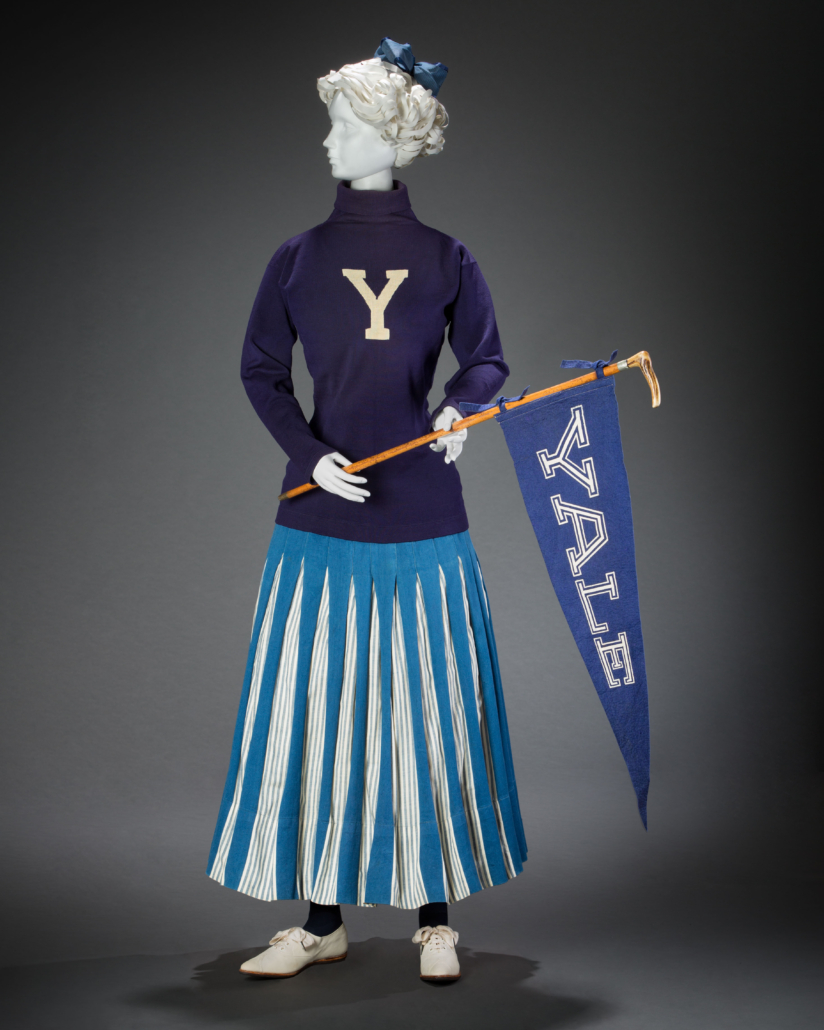 Sporting Fashion: Outdoor Girls 1800 to 1960 highlights the ensembles that defined women’s participation in the sporting world as athletes and spectators. The exhibition begins at the turn of the 19th century, outside the domestic sphere, and concludes with the mid-20h century when basic forms of women’s sportswear we know today were codified. Examining the competing priorities of fashion, function, and propriety, Sporting Fashionwill feature 64 fully accessorized ensembles and a selection of sport-related accessories and ephemera, all drawn from the exceptional collections of the FIDM Museum.

The subtitle Outdoor Girls is inspired by the printed script on a circa 1946 wool scarf, which depicts women engaged in 13 different sports, including golf, horseback riding, ice-skating, and tennis. The exhibition will include ensembles worn for more than 40 outdoor activities during the course of the 19th and 20th centuries, each carefully assembled based upon extensive primary-source research. The exhibition will include ensembles for activities ranging from traveling to calisthenics, and from motorcycling to promenading. 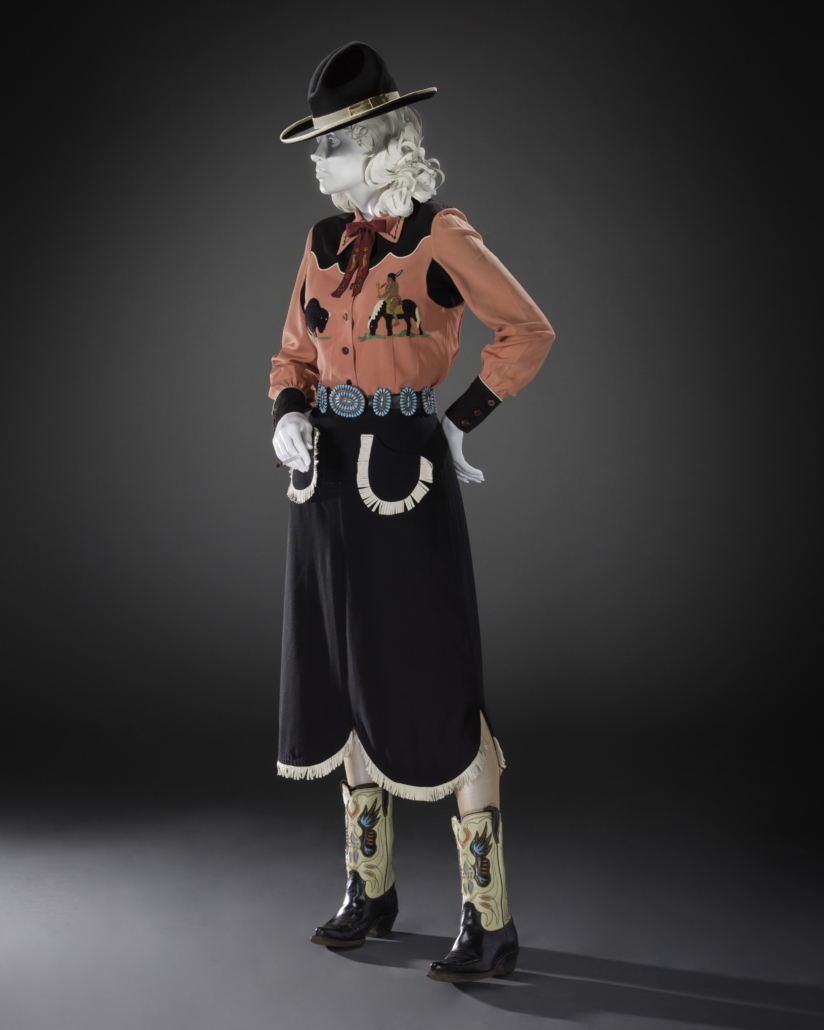 Organized into six themes, Sporting Fashion: Outdoor Girls 1800 to 1960 explores how clothing met the needs of new pursuits for women, while at the same time preserving their socially approved restricted mobility. Garments for swimming and tanning illustrate how innovative designers and manufacturers responded to the increasing acceptance of exposed skin at beaches and pools; winter sports ensembles show how apparel for pastimes such as skiing and ice-skating protected female participants from the elements; and ensembles for cycling, motoring, and flying—often adapted from men’s athletic gear—will reveal how women navigated open roads and skies.

To complement the artifacts on view, documentary film footage spanning the 1890s to the 1950s will allow visitors to see the garments in motion and showcase the agility of sportswomen of the past. Themes explored in the exhibition include: 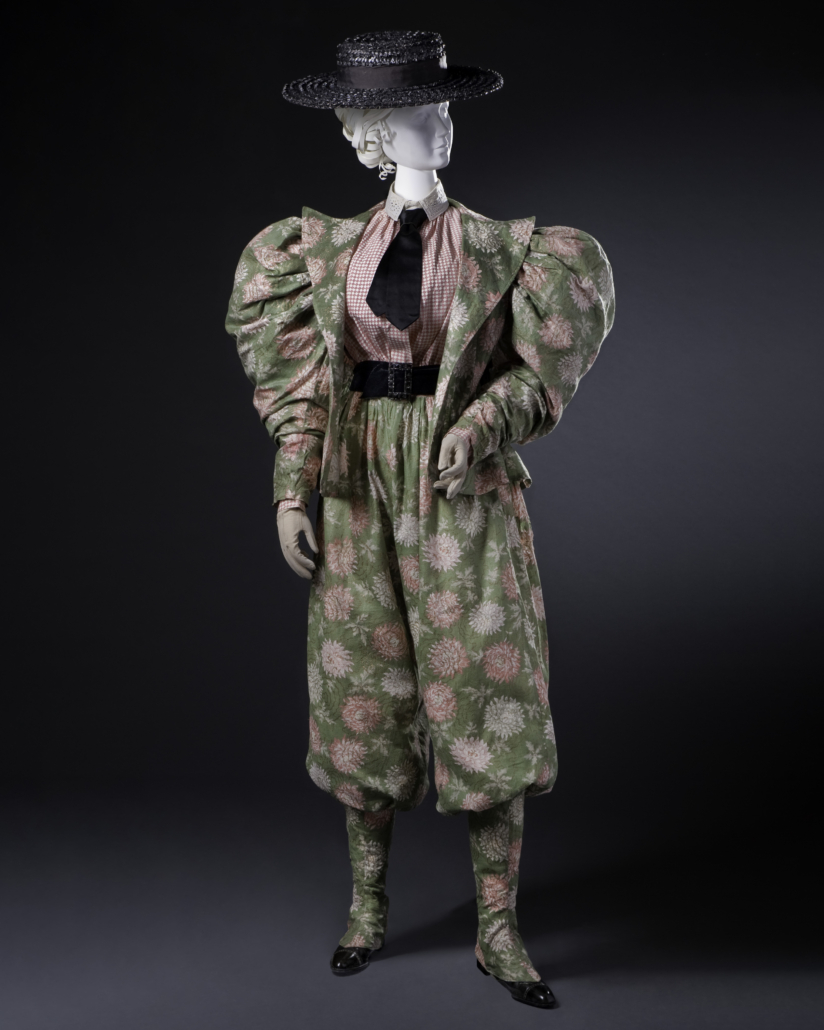 Stepping Outdoors: Illustrates how women who dressed for leisurely outdoor pursuits in the early 19th century were required to maintain the necessary social proprieties for their times. As women increasingly ventured away from home, new sports emerged, and fashions designed for daily wear transitioned to those intended for particular sporting activities.

Taking the Reins: Represents traditions of riding and wrangling horses, as well as attire for the park paths and arenas where equestrian enthusiasts mingled. 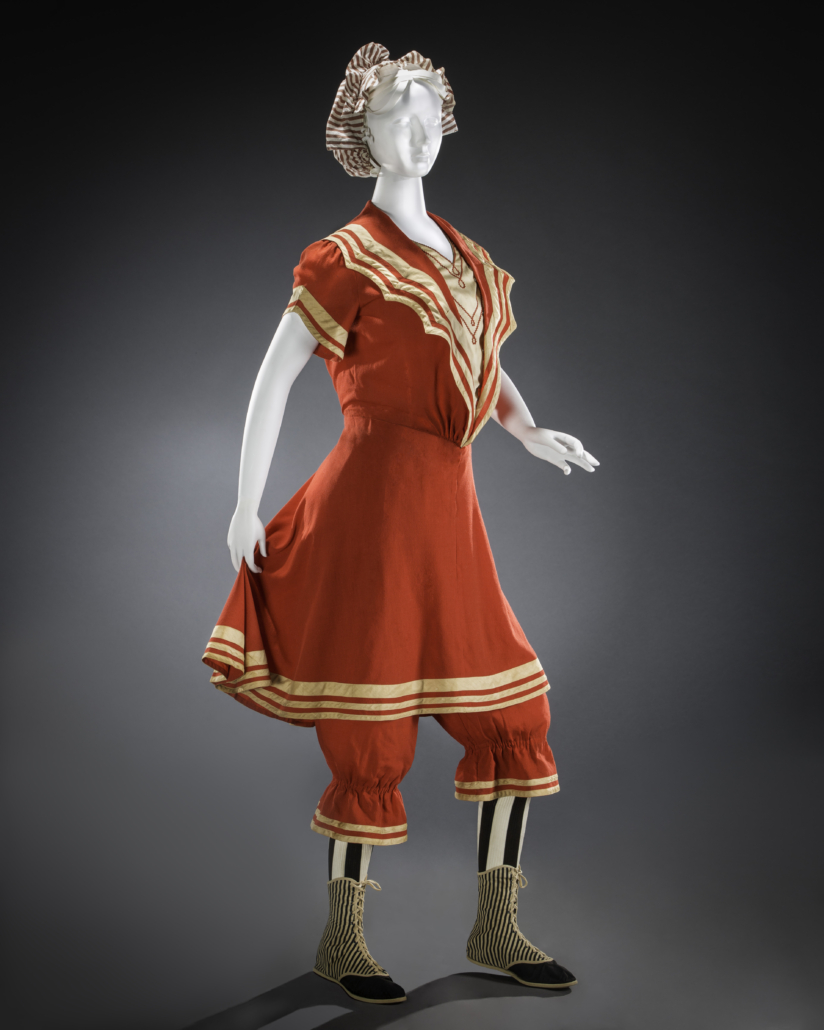 Making Waves: Explores how designers both reacted to and encouraged the growing acceptance of exposed skin at public beaches and pools. 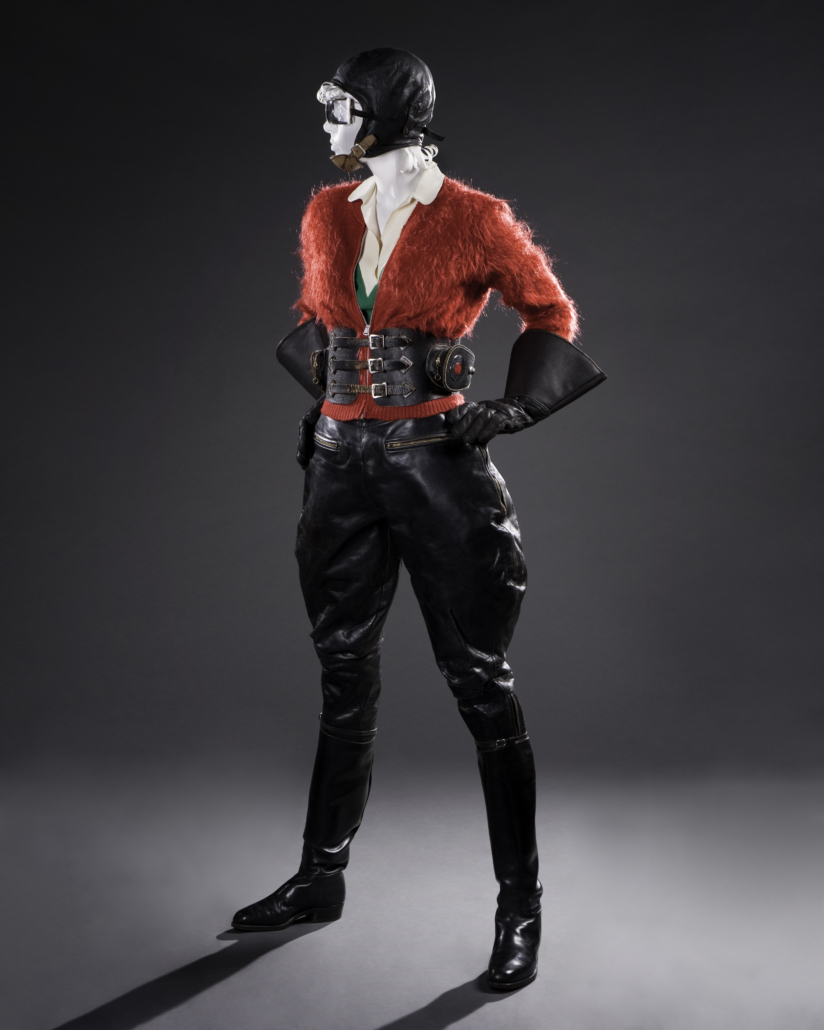 Wheels and Wings: Traces women’s ventures into the previously male-dominated realm of mechanized sports as they enjoyed increased freedom of travel via road and sky.

A Team Effort: Shows the advent and evolution of warm-weather ball sports that could be played on manor lawns and in public parks, and later in arenas. This section also celebrates female athleticism and competition, and considers the development of regulation uniforms on courts and fields, and in gymnasia. 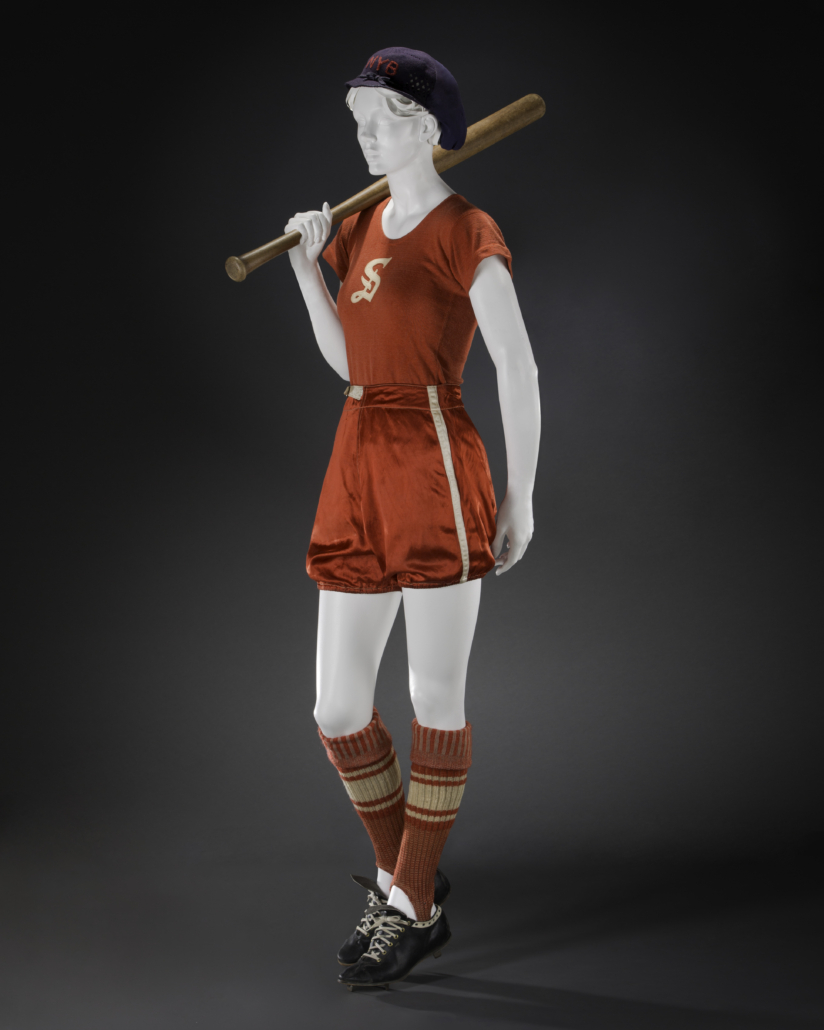 Sporting Fashion: Outdoor Girls 1800 to 1960 is organized by the American Federation of Arts and the FIDM Museum at the Fashion Institute of Design & Merchandising, Los Angeles.

A foreword by Serena Williams, offering a contemporary and personal perspective on the role of fashion in sport, opens the accompanying illustrated 344-page exhibition catalog. The book provides both a stunning visual record of the garments on display and serves as important point of reference for further research into women’s sporting attire. Published by the American Federation of Arts and Prestel, the catalog features an introductory essay and detailed entries on each ensemble in the exhibition, co-written by curators Kevin L. Jones and Christina M. Johnson. It is one of the very few authoritative publications on the diverse aspects of women’s sport history and the development and evolution of their athletic attire. The catalog is available for purchase at the Frick Museum Store (cost: $54 Frick members; $60 non- members). 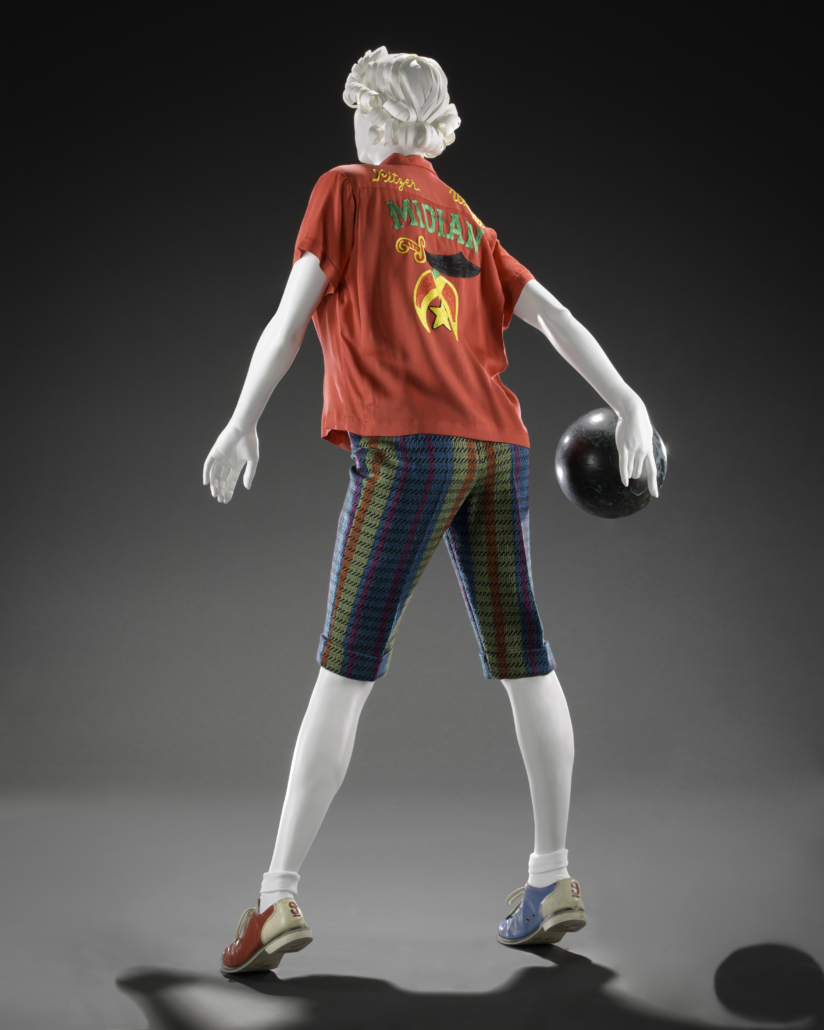 Sporting Fashion debuts at The Frick Pittsburgh and will be on view from July 3-September 26. It will subsequently travel to seven institutions across the United States through 2024, including presentations at the Dixon Gallery and Gardens, Memphis, Tennessee from July 24-October 16, 2022; the Figge Art Museum, Davenport, Iowa  from February 11-May 7, 2023; the Munson-Williams-Proctor Arts Institute, Utica, New York, from June 17–September 17, 2023; the Taft Museum of Art, Cincinnati, Ohio, from October 14, 2023-January 14, 2024; and the Cummer Museum of Art & Gardens in Jacksonville, Florida, from February 24-May 19, 2024; with its final stop at the FIDM Museum in Los Angeles.

Visit the website for The Frick Pittsburgh and see its dedicated page for Sporting Fashion: Outdoor Girls 1800 to 1960.