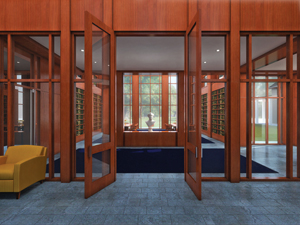 The new library is expected to open in 2012 on the grounds of George Washington’s estate off the banks of the Potomac River. Image courtesy Mount Vernon Ladies’ Association.

MOUNT VERNON, Va. (AP) – There were no presidential libraries in the days of George Washington, so his papers and writings are scattered around the world. Some are lost forever. Martha Washington, for instance, burned nearly all of her personal letters from her husband shortly before she died.

But an unprecedented $38 million donation will allow George Washington’s Mount Vernon estate to establish a library dedicated to scholarship on the nation’s first president, in many ways filling the role of the modern presidential library.

The Fred W. Smith National Library for the Study of George Washington is expected to open in 2012 on the grounds of Washington’s estate off the banks of the Potomac River, the estate announced Friday.

Mount Vernon Director James Rees said they don’t want to call it a “presidential library,” though, for several reasons. First, Mount Vernon has long prided itself on eschewing all forms of government funding, a contrast with modern presidential libraries that are part of the national Archives.

Rees also said a library focused only on Washington’s presidency would be too limiting, ignoring his significant contributions as a military general and as an 18th century entrepreneur.

The library will not only serve leading scholars and historians, but is designed to reach out to the general public. It will help train teachers and can host conferences and seminars for corporate boards to learn about Washington’s leadership skills.

The estate also wants to create a Mount Vernon Press that will publish new research on Washington.

Rees said he wants to engage the public in new ways. As an example, he suggested developing a George Washington video game, highlighting Washington as an 18th-century action hero.

“Mount Vernon has to reach beyond these gates,” Rees said. “We have to get involved with what’s called pop culture.”

Several years ago, concerned that the public viewed Washington as a stodgy, irrelevant figure, the estate built a new museum and orientation center that highlighted Washington’s vigorous youth and his military exploits, using interactive exhibits and even a 4-D theater. The new exhibits spurred a 20 percent increase in attendance that has not abated.

The $38 million donation, the largest in the estate’s history, comes from the Las Vegas-based Donald W. Reynolds Foundation, a longtime supporter of Mount Vernon.

Fred W. Smith, the foundation’s chairman, said his organization does not typically get involved in historical preservation efforts, but he was spurred to action in 2001 after learning that the Smithsonian Institution might lose possession of a famed Gilbert Stuart portrait of Washington. He learned from Rees that history textbooks in recent years have devoted less and less attention to Washington. Since then, he has been a staunch supporter of Mount Vernon.

“When I was in school, every schoolhouse had a picture of George Washington,” Smith said.

The estate also announced a partnership Friday with the University of Virginia, in which the new library will serve as the home for The Papers of George Washington, a 90-volume edition being compiled by the university consisting of copies all the known letters and documents written and received by Washington.

Mount Vernon plans to break ground on the library only after it raises $20 million in matching funds. 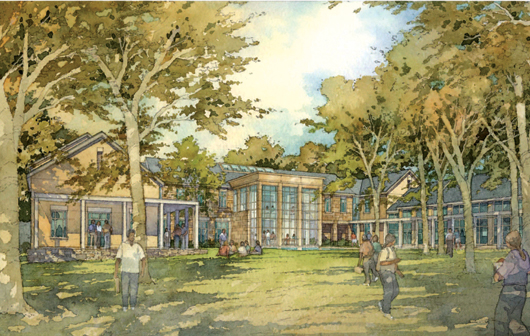