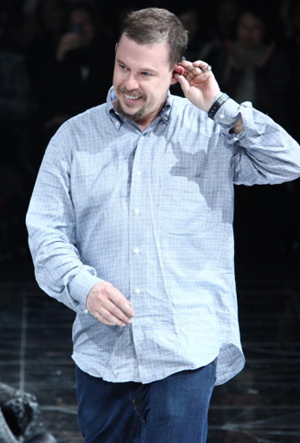 LONDON (AP) – The outfits best told the story Tuesday as Anna Wintour, editor of American Vogue, and top museum officials paid tribute to the late Alexander McQueen, soon to be honored with a major career retrospective at New York’s Metropolitan Museum of Art.

The six McQueen designs displayed on mannequins in the breakfast room at the Ritz Hotel illustrated the qualities that set McQueen apart: The romantic vision, the yearning, the flawless tailoring and the occasional whimsy were all present, to a degree dwarfing much of the work on display at London Fashion Week, which ends Wednesday with menswear shows.

Wintour, a co-chair of the exhibit along with Stella McCartney, Colin Firth and others, said McQueen was greatly influenced by the London street scene, which shaped him in the early years of his career.

“Alexander loved London,” Wintour told The Associated Press. “I think Alexander was a creature of London – the street culture here, the music and the art were all references for his work. You know he may have traveled to Paris to get more exposure for his collection but in his heart he would always be English, Scottish.”

Wintour said McQueen’s shows were always the highlight of fashion weeks in London and Paris because of his originality.

“He had an imagination that was quite unlike anybody else’s,” she said. “What was so great about him was there was no pretense; he wore his heart on his sleeve.”

While lamenting the loss of McQueen, Wintour praised his successor, Sarah Burton, who was named by the Gucci Group to serve as creative director at the McQueen design house several months after his death in February 2010.

“She worked with him for so many years, and she’s going to put her own stamp on it, but very respectfully,” Wintour said of the woman given the delicate task of taking McQueen’s place at the head of the design studio.

Wintour said Burton had been a “brilliant” choice to replace McQueen, but her words capture the challenge Burton faces – she must follow her own creative vision, but still pay homage to McQueen, the guiding light who created the fashion house.

After a founder’s death or retirement, other major labels have turned to lesser-known in-house talent, as happened with Valentino; or brought in outside designers, as happened at Emanuel Ungaro and Halston; or even recruited family, as happened when Donatella Versace took the company’s creative helm after her brother Gianni Versace was murdered in 1997.

The transition is often rocky.

Valentino went through turbulent times after the Italian designer retired. His immediate successor, Alessandra Facchinetti, was bounced the day after she showed her second ready-to-wear collection.

A designer’s name is sometimes carried on by a company that has nothing to do with the founder. Perry Ellis International, for example, was purchased in 1999 by another fashion company that took his name although it had no connection to Ellis, who died in 1986.

In the case of McQueen, the posthumous honors being lavished on the designer – like the landmark Metropolitan Museum exhibit – may make Burton’s task of differentiating her work more difficult.

The 100-piece McQueen show at the Costume Institute of The Metropolitan Museum of Art in New York will run from May 4 until July 31. It will include many of his signature items, including the bumster trouser and the kimono jacket, along with designs from the McQueen and Givenchy corporate archives and his private collection.

Costume Institute curator Andrew Bolton said McQueen merits the attention because he was above all else an artist and a master craftsman, not someone simply concerned about trends.