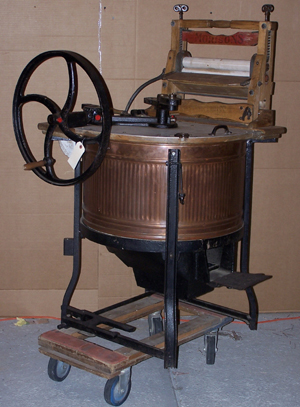 ELLENSBURG, Wash. (AP) – The display of old-time washing machines hearkening back to as early as the late 1800s was aimed at something to interest women coming to the annual Threshing Bee and Antique Equipment Show.

Yet the guys also lingered at Faye Gordon’s display at a cabin tucked away at Olmstead Place State Park last weekend where the show took place.

Longtime Kittitas Valley resident Chriss Peterson on Saturday slowly walked up to the exhibit of old washers and chuckled and smiled at his memories.

“I remember that one, oh, boy, do I remember that one,” Peterson, 91, said pointing at the wooden, hand-cranked tub in Gordon’s collection. Peterson said he came to Kittitas County in 1940 as a young man, but before that, back in Oklahoma, it was the four boys, not the four girls in his family who took turns pulling the crank for Mom on washday.

A gas engine could power this Morrison washing machine, which has a copper tub. Power was transferred by belt to the wheel on the washing machine. Image courtesy of Old Hat Auctions, Houston Texas, and LiveAuctioneers archive.

The crank turned the round agitator inside the washtub.

“As I remember it, it was a hundred strokes for the boys’ clothes, and we could get by with 50 pulls for the girls’ clothes,” Peterson said with a laugh.

“You see, the girls’ clothes weren’t so dirty.”

And what did the girls do?

“Well, they did all the ironing.”

Gordon smiled at that memory, and later said her collection has been a feature at the annual threshing bee for more than five years.

“That’s what’s so fascinating: The older people always seem to have a story, something they remember about an old machine,” Gordon, 53, said.

“I’ve always gone to the shows, and I just saw a lack of things that might interest the ladies,” Faye said. “So, washing machines seemed a good choice.”

She now has nine antique machines, from handmade, wooden models that were used in the late 1800s to before 1915, to the “modern era” of electric and gasoline-powered Maytag machines stretching from about 1905 to the early 1920s.

Her “latest” machine is from the early 1950s with a porcelain tub.

“A lot of those same older people who remember those washers with the wringers on top to squeeze the water out, they also tell stories of people getting caught in the wringer, their hair or a sleeve or even fingers and hands and arms,” Faye said.

And the old-time term of “getting caught in the wringer” or variations of being “put through the wringer” were born: it indicates experiencing circumstances which are exerting pressure and stress on people.

Faye and Brian keep their eyes open for estate sales and visit far-flung antique stores and old farm equipment shops during their travels.

The crowning glory of her collection is a shining copper tub machine with an electric motor to spin the tub and work agitators.

The machine is a 1905 Laun-Dry-Ette model. The Gordons found it driving down a residential road in Troy, Mont.

“There it was in the backyard of someone running a flower business of some kind,” Faye said. “We stopped and asked if they wanted to get rid of it. They did, for a price.

Many people, Faye said, turn antique washing machines, with their outside round tubs, into huge, outdoor flower pots.

But not Lee Maxwell of Eaton, Colo. He owns and operates the national Washing Machine Museum and has more than 1,000 antique machines and vast amounts of information about them.

Faye said Maxwell was helpful in providing information about her machines and sending her color photos of restored models.

“He wants to share what he knows, and he really wants to do what he can to assist any other collectors,” Faye said.

Her husband has a number of old antique tractors, and Faye said she does have one herself.

Yet the old washing machines hold an attraction all their own.

“It’s a coming together of American mechanical ingenuity, the availability of electricity and wanting to make household chores easier,” Faye said. “The demand for it came, I think, also because women just got to the point where they wanted more time in their lives for doing other things besides laundry all day.”

As for the younger women looking at the machines, Faye said they are in awe of all the work it took to do laundry and an appreciation for what’s available now.

Faye said her fascination has continued through the years with all the variation of mechanical devices put forth to clean clothes.

“In the end, it’s way better than the washboard and the open tub and doing it by hand,” Faye said.

And, yes, she does have an old-time washboard hanging in display on the wall behind the machines.

No one asks about that model.