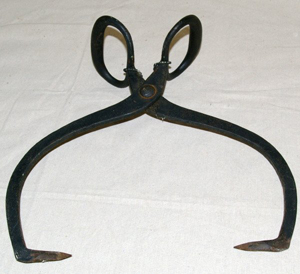 Primitive tongs made of iron were used to handle cut blocks of ice. Image courtesy of LiveAuctioneers Archive and Burley Auction Group.

PONTIAC, Mich. (AP) – The old saying goes, “What’s one person’s trash is another person’s treasure,” but to an archaeologist, that trash can be the key to unlocking mysteries of local history.

Oakland University Professor Richard Stamps and his students have uncovered the remains of an icehouse that was built adjacent to the summer kitchen and the home of former Gov. Moses Wisner, the 12th leader of the state of Michigan, to store huge blocks of ice from local lakes. The blocks of ice were cut into smaller blocks and carried daily into the kitchen or the mansion and stored in an icebox to keep the food cold and unspoiled.

All that was visible when Stamps and his group started the dig last year was an herb garden surrounded by a decorated row of bricks on the grounds of the mansion that is now part of the Pine Grove Historical Museum.

Stamps had seen an aged photo of what looked like an icehouse located near the mansion’s smokehouse. So, after some research, the archaeologist determined it was worth a dig.

The careful work of uncovering the site is being done with federal grants obtained by Carol Bacak-Egbostaff, the development consultant for Waterford Schools and the director of Project Dig Into The Past. The project is a partnership between Waterford School District and Oakland University.

Stamps and Bacak-Egbostaff recently showed off the group’s work.

Where there was only the herb garden visible last year now sits, behind a protective fence and deep below the ground, is a mammoth, brick-lined underground room. Stamps said the aboveground portion of the building had long ago been pushed down into the hole after refrigeration took away the need for storing ice at the beginning of the 20th century.

The 9-by-12 foot room is lined with a foot-thick wall of bricks, and the bottom floor is seven feet deep into the ground.

The floor is sand, which Stamps explains would absorb any water from melting ice. Wisner and his staff would have had to use a ladder to climb down into the room to retrieve the ice as it was used up over the year.

There were no stairs except those put in for the dig. Stamps and his students, who did the laborious job of digging out the mammoth room, carefully picked through the earth and debris for historical artifacts. The items they found tell a lot about life as it was from the 1840s through the 1940s.

On a tarp spread over the ground are large items that were found in the dig as the students slowly dug down seven feet to the floor of the room. The items include rusty carriage wheels from the 1800s and old balloon tires from the 1920s.

Stamps showed off some “amazing artifacts,” which are smaller finds such as a blue enamel sauce pan; a small collection of ceramic and shell buttons; and a broken glass milk bottle with the head of an Indian and part of the words “Pontiac Dairy.”

“They have no value to collectors. They are broken,” Stamps said. “But to archaeologists they tell a lot.”

There is also a chamber pot that was used before indoor bathrooms, a tricycle wheel and a metal racing car.

Bacak-Egbostaff is especially excited about finding pieces of a yellow “baby plate” that has a rolled rim that prevents spills. There are still portions missing, but the found pieces pulled together show most of the “Hickory Dickory Dock” rhyme and a picture of children in pastel colors on the bottom.

While the dig site is used as a field methodology class for Oakland University students, it has become an educational field trip site for students from Waterford schools. Bacak-Egbostaff has arranged for third-graders and teachers to visit the site and tour the buildings, and for high school students to screen artifacts.

Information from: The Oakland Press, http://www.theoaklandpress.com

Fossil finds to be displayed at Houston museum