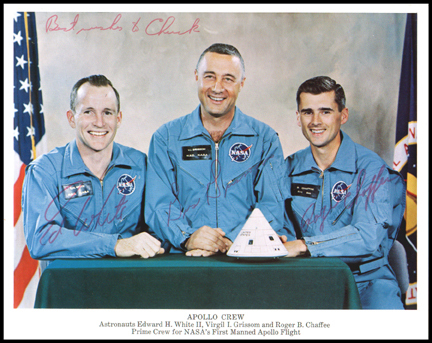 NASA 8-by-10 crew photo of (from left) Ed White, Gus Grissom and Roger Chaffee, who all perished in a launch pad fire 50 years ago. Image courtesy of LiveAuctioneers archive and Aurora.

GRAND RAPIDS, Mich. (AP) – Dave DeBruyn, the longtime curator for the Roger B. Chaffee Planetarium, never met the Apollo astronaut for whom the planetarium is named.

Neither has Bob Steelman, who chairs a scholarship foundation created to honor the Wyoming, Mich., native who was one of three astronauts killed 50 years ago in a Jan. 27 launch pad fire.

But The Grand Rapids Press reports that thousands of area students and adults know of Chaffee thanks to their efforts and others who have supported the museum and scholarship fund.

On Feb. 10 and Feb. 11, the museum and Grand Valley State University will sponsor “Roger That! A Celebration of Space Exploration in Honor of Roger B. Chaffee.” The two-day event is designed to introduce students to astronomy and space exploration.

For visitors to the planetarium at the Grand Rapids Public Museum’s Van Andel Museum Center, an introduction to Chaffee and his legacy is part of the orientation.

Using a video and artifacts donated by Chaffee’s parents and the National Aeronautics and Space Administration, the display introduces children to the man who studied hard and became one of the nation’s most elite pilots before tragedy struck.

Chaffee’s legacy also continued through a scholarship fund that was created by his parents and community leaders. The $3,000 scholarship is awarded every spring to a Kent County high school senior headed for a career in math or science.

“The community felt the scholarship was important to honor new talent and also to honor a Grand Rapids hero,” said Steelman, whose daughter, Kelly, was a recipient 20 years ago. She’s now a professor at Michigan Technological University in Houghton.

“I think it’s very meaningful for the recipients, not only in that it provides some money to help their education, but I think it’s an inspiration, too,” said Steelman.

DeBruyn had been on the job for two years at the planetarium when the fire occurred. The following May, planetarium was renamed to honor Chaffee in a ceremony attended by Eugene Cernan, a fellow astronaut and Chaffee’s neighbor in Houston.

The association and name continued when the museum and planetarium moved across the river to the Van Andel Museum.

“From then on throughout the end of the Apollo era, whenever we had shows that dealt with space, we recalled his contribution,” says DeBruyn, who retired from the museum 13 years ago but retains an office at the museum and writes an astronomy column for The Grand Rapids Press.
___