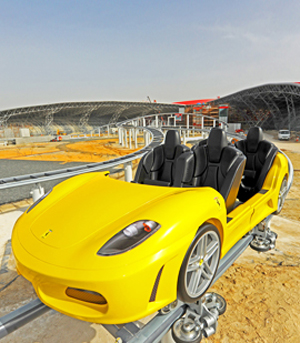 ABU DHABI, United Arab Emirates (AP) – Hold onto your mouse ears, Ferrari is bringing pedal-to-the-metal thrills to the world of theme parks in a bid to tap into a love for speed and luxury cars among people in the oil-rich Middle East.

The Italian automaker plans to rev up an arena more known for cartoon characters and superheroes when Ferrari World opens Wednesday with what the company says is the world’s fastest roller coaster and a 20-story tower ride that duplicates the G-forces felt by race car drivers.

Accustomed to running at the front, Ferrari is the first sports car manufacturer to make a foray into theme parks, calling it the world’s largest indoor park and the first in the Middle East. And like a driver setting up a pass, Ferrari has chosen its spot carefully.

Situated just down the road from the Yas Marina Circuit that hosts Formula One’s season finale next month, the park’s location in a region with some of the world’s highest per-capita incomes offers advantages to a sport that has seen its fortunes suffer during the recent economic downturn.

“The locals are very interested in cars, fast cars. You can see that when you drive around,” said Khaled al Qubaisi of the United Arab Emirates, the only Middle Eastern driver competing in the Porsche Supercup Series.

“That is something within us, going fast and outperforming in whatever we ride whether it be the horses or cars,” he said. “If people are interested in cars, they are interested in car racing. If you give them right product in motor sport, they will naturally be attracted and follow it.”

Besides the 149 mph roller coaster, the 203-foot tower ride and a 2.1 million square-foot roof painted Ferrari red, the park in the United Arab Emirates’ capital will feature the largest collection of current and classic Ferrari race cars outside the company’s headquarters in Italy, as well as an Italian restaurant inspired by Mamma Rossella, a favorite haunt of Ferrari drivers when they are in Italy.

Visitors can stroll through a Ferrari paddock, handle tools used during races and train to be part of a pit crew that changes the tires on an F1 car.

“It brings motor racing. It brings together beautiful GT cars. It brings nostalgia,” said Andy Keeling, park manager at Ferrari World. “Let’s also not forget it is a great, fun place to go. It’s not a museum. It’s not a car salesroom. You ride great roller coasters. The icing on the cake is that it’s a Ferrari Formula 1 roller coaster.”

The decision by Ferrari to launch its first theme park in the Middle East shows the region’s importance to a sport that has seen car manufacturers such as Honda pull out and several advertisers end their sponsorship deals.

The Gulf already boasts F1 races in Abu Dhabi and Bahrain, and Qatar reportedly wants to host a third. Drag racing is taking off and desert rallies fill the racing calendar from Jordan to Saudi Arabia.

Racing has always been part of Arab culture. Tribesmen have raced camels and horses for centuries, and Dubai hosts the world’s richest horse race in the $10 million Dubai World Cup. This passion for head-to-head competition translated to the four-wheel variety with the introduction of road rallies in the 1970s and picked up steam with the Middle East Rally Championship in 1984.

Since the debut of the Dubai Autodrome racing circuit in 2004, the interest in motor sports has exploded. The Automobile and Touring Club of the United Arab Emirates says the number of racing licenses has jumped to 800 from 200 in the past five years and Gulf Arabs are increasingly flexing their muscle on and off the track.

Sheik Khalid bin Hamad Al Thani, the son of the emir of Qatar, has invested $7 million in a new drag racing team that competes on the NHRA circuit in the United States, and an Abu Dhabi government-backed entity entered one of its Top Fuel dragsters in four NHRA races this year. Sheik Khalid Al Qassimi of the United Arab Emirates is a rising star in the World Rally Championship, while Qatar’s Nasser al-Attiyah finished second in this year’s Dakar Rally.

The Abu Dhabi circuit also has set up a drag racing school run by Top Fuel driver Rod Fuller that aims to develop Emiratis to compete at the sport’s top level. It also plans to open a racing academy with the goal of putting an Emirati behind the wheel of an F1 car in the next decade.

“That is very achievable,” said Richard Cregan, the chief executive officer for Abu Dhabi Motorsports Management, which runs the Yas Marina Circuit. “It’s a matter of providing opportunities for Emiratis to race and they will do so.”

Among F1 teams, Ferrari has been the most aggressive in tapping into the popularity of racing in the Middle East. It opened a store at Abu Dhabi to sell Ferrari merchandise in 2007 and last year unveiled its largest outlet in Dubai complete with a ribbon cutting ceremony featuring former F1 drivers Kimi Raikkonen and Giancarlo Fisichella.

On weekends, the 1,000-square-foot store in Dubai is packed with conservatively dressed Emiratis shopping for everything from golf balls to perfume to children’s bikes – many painted Ferrari red and featuring the company’s prancing horse.

“I like F1. The race is like holding your breath,” said Asma al-Hammadi, who estimated she comes to the Dubai store three or four times a month and spent about $4,100 on tickets for an F1 race in Bahrain as a surprise gift to her husband.

Ferrari World is the company’s most ambitious effort yet in the region, boasting more than 860,000 square feet and 20 Ferrari-inspired attractions, according to General Manager Claus Frimand. The roller coaster tracks that snake outside the air-conditioned park hint at the thrills that await inside.

And although entertainment is its main focus, Frimand said the park offers Ferrari a unique platform to share its storied, 81-year history and attract new fans.

“We are the ultimate brand experience for Ferrari,” Frimand said. “We tell the whole story of all the Ferrari victories over time and why it’s the biggest of the race teams.”

List of rides and attractions at Ferrari World Abu Dhabi:

• Formula Rossa – The world’s fastest roller coaster, reaching speeds of 240 kmph.
• Speed of Magic – A fantasy 4-D journey following the adventures of a young boy as he travels through a kaleidoscopic dreamscape of natural and phenomenal environments, where no Ferrari has gone before.
• Made in Maranello – A virtual trip behind the walls of the famous Ferrari factory in Maranello, taking guests through the intricate process of making the world’s most sought after car.
• V12 – An exciting flume ride to the heart of a 12 cylinders engine.
• G-Force – A thrilling tower ride that will shoot thrill-seekers through the red roof and 62 meters in the air before plummeting back to Earth, experiencing the actual G-force of a Ferrari, in a seat directly inspired by the Ferrari Enzo.
• Scuderia Challenge – Cutting edge racing simulators similar to those used by the drivers of the Scuderia Ferrari in training.
• Viaggio in Italia – A virtual aerial voyage over Italy’s cities and their main monuments, mountains and coasts pursuing a Ferrari.
• Fiorano GT Challenge – A unique dueling rollercoaster with Ferrari F430 Spiders twisting and turning through tight corners on a sprint to the finish line.
• Bell’Italia – A miniature recreation of Italy’s most famous locations, from the picturesque Portofino and the Amalfi Coast to Monza racetrack, the Colosseum in Roma, Venezia and Maranello, the heartland and home of Ferrari.
• Paddock – A re-creation of the Ferrari motor home including garages, transporters & hospitality suites with interactive shows offering fans a taste of the true action behind the scenes on a Grand Prix race day.
• The Pit Wall – An interactive theatre that allows guests to test their judgment in realistic racing scenarios.
• Galleria Ferrari – The world’s largest Ferrari gallery outside Maranello, showcasing the most exclusive range of classic and contemporary Ferrari’s from all over the world.
• Junior GT – A driving school for children with expert instruction where they will drive reduced scale F430 GT Spiders on an equipped driving course.
• Junior Grand Prix – After the Junior GT driving experience, budding F1™ drivers can enjoy the race track in scaled down Ferrari F1™ racers.
• The Racing Legends – A ride through Ferrari’s greatest racing moments starting from the first races all the way to today’s F1 victories.
• Driving with Champions – An interactive 3-D show which follows the adventures of a young engineer who is taken on the ride of a lifetime with a racing champion on his first day working at the Ferrari factory
• Cinema Maranello – Ferrari World’s own theatre showing ‘Coppa di Sicilia’, a short film that tells one of the many inspiring stories from the life of the legendary Enzo Ferrari.
• Junior Training Camp – An interactive play area for children where they can engage with a waterless car wash, become custom ‘constructors’, climb up the grandstand, pilot remote cars, peddle their own miniature Ferrari and play with an F1™ car made of soft, guest-friendly foam.
• Carousel – Featuring never-before-seen Ferrari prototypes based on winning designs from a Ferrari competition.
• Dining and Shopping – A range of concept restaurants and cafes offering authentic Italian dining experiences, in addition to unique shopping locations. 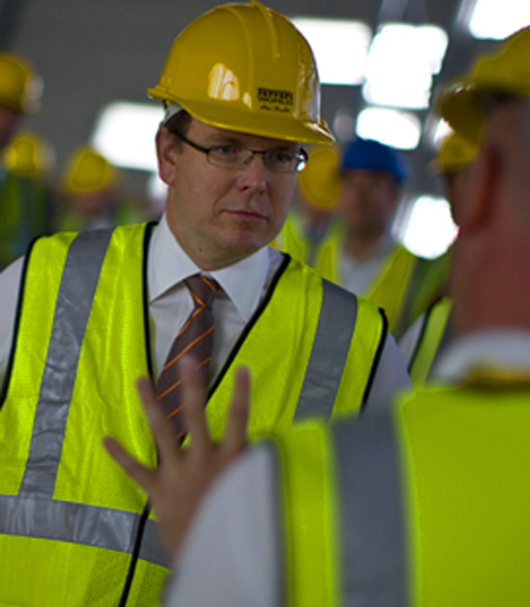 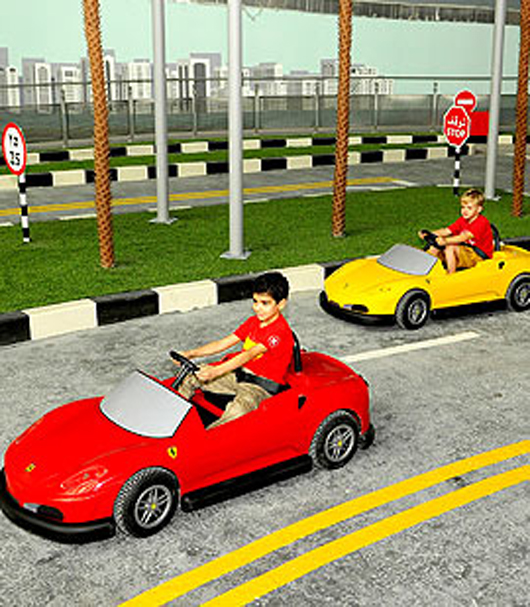 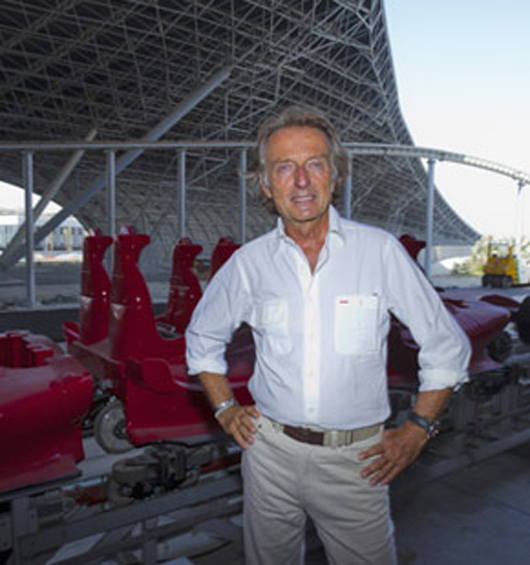 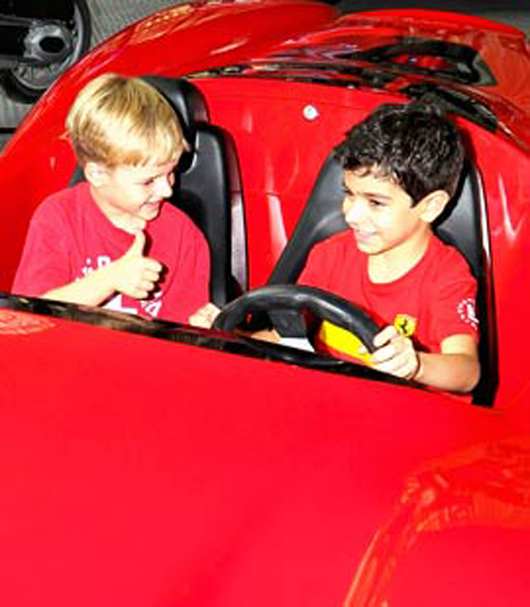 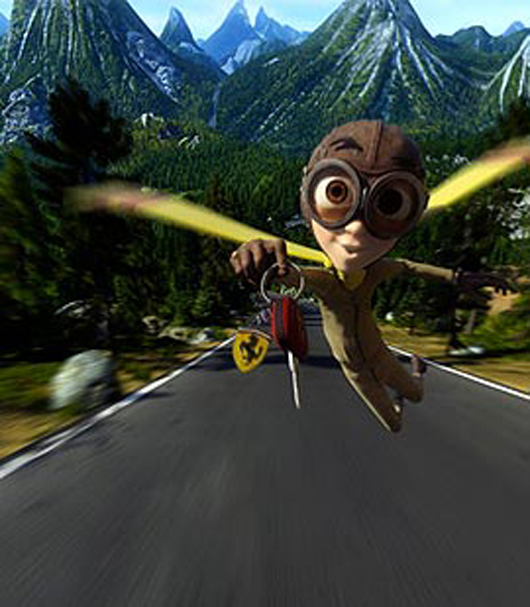