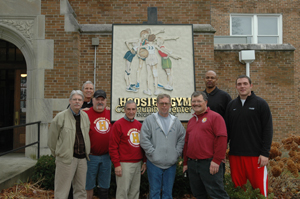 KNIGHTSTOWN, Ind. (ACNI) – In a scene from the movie Hoosiers, Coach Norman Dale, played by Gene Hackman, takes a deep breath and says to himself, “Welcome to Indiana basketball,” as he opens a door and steps into an old gymnasium packed with boisterous fans.

Fans of the movie recall this and other memorable scenes when they visit the Historic Hoosier Gym, which was picked as the home court of the Hickory Huskers for filming in the fall of 1985. The movie is based on the true story of tiny Milan defeating powerful Muncie Central on a last-second basket and thus winning the 1954 Indiana high school basketball championship. Considered one of the top sports movies of all time, it’s a classic all-American story of the underdog prevailing with hard work, grit and determination.

Peg Mayhill, wife of newspaper publisher Tom Mayhill, was one of several civic-minded women who successfully lobbied the Indiana Film Commission to consider the Knightstown gym as a location for the movie.

Built in 1921 with funds donated by the citizenry, the gym was the home of Knightstown High School basketball teams until 1966. With seating for about 650 fans on fixed wooden stands, the gym was regularly filled to capacity for varsity games on Friday and Saturday nights. After the local school district built a new high school and abandoned the old gym in the 1980s volunteers came to the rescue. The popularity of the film provided impetus to renovate the gym, which is now owned by the town.

The facility is now Knightstown’s community center, where children learn the game of basketball on the same court where their grandparents played. Meanwhile, visitors from across the nation and around the world experience the Hoosier Gym with the same awe that struck Coach Dale in his opening game there.

Just as impressed are the numerous basketball stars and sports celebrities who have come to the Hoosier Gym to tape TV spots and commercials. NBA greats Larry Bird, Magic Johnson, Lebron James and Carmelo Anthony met at the Hoosier Gym in June 2004 for an ESPN special titled Two on Two, hosted by Jim Gray.

Recently CBS college basketball analyst and former NBA player Clark Kellogg spent several hours at the Hoosier Gym taping scenes for a promotional video for Athletes in Action sports ministry. The video will be presented at the AIA’s Legends of the Hardwood Breakfast on April 3 during the NCAA Final Four weekend in Indianapolis.

The 6-foot-7 Kellogg, Big Ten Conference MVP of 1982 while playing for Ohio State, recalled key scenes from the movie with the historic gym as his stage.

Like all visitors to the Hoosier Gym, Kellogg couldn’t turn down the opportunity to take a few shots.

“I can still shoot,” said Kellogg, making a shot from beyond the free throw line. “I just can’t jump.”

Picked eighth in the 1982 NBA draft by the Indiana Pacers, Kellogg retired after five seasons because of chronic knee problems.

Kellogg has been a college basketball analyst for CBS sports for the past 17 seasons. Last season was his first as the network’s lead analyst for the NCAA Final Four tournament, working with play-by-play announcer Jim Nantz.

After the shoot the affable Kellogg graciously autographed a number of Hoosier Gym souvenirs that will be offered later in fund-raisers.

Everyone who met Kellogg during his visit to the Hoosier Gym agreed that he is deserving of his nickname, Special K.

The Hoosier Gym is open daily except holidays. It is located at 355. N. Washington St., three blocks north of U.S. Route 40 (Main Street).

About the author: In his spare time, Auction Central News Associate Editor and former sports writer Tom Hoepf serves as secretary of the Hoosier Gym Community Center of Knightstown. 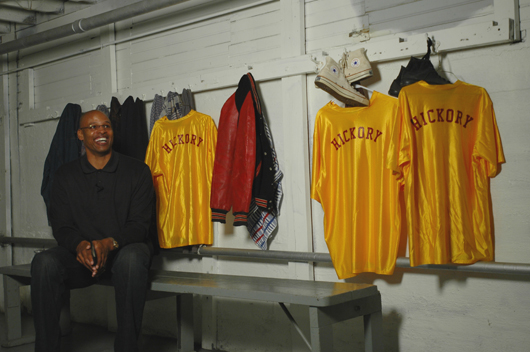 CBS basketball analyst Clark Kellogg prepares to deliver his lines for a video, which was videotaped at the Hoosier Gym in Knightstown, Ind. Kellogg is seated in the locker room where Hickory Huskers suited up for their home games in the movie ‘Hoosiers.’ Photo by Tom Hoepf. 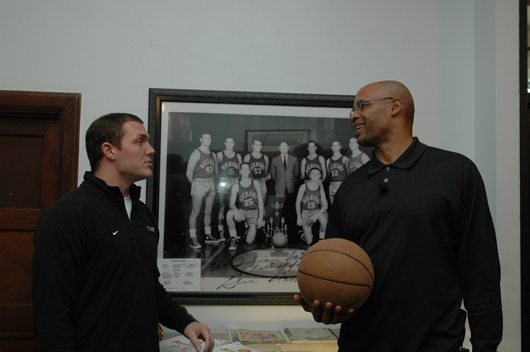 Luke Simons of Athletes in Action and Clark Kellogg talk basketball in the lobby of the Hoosier Gym. In the background is a team photo of the Hickory Huskers, including actor Gene Hackman as Coach Norman Dale. Photo by Tom Hoepf.