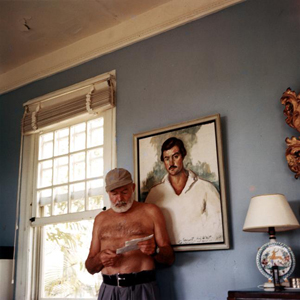 BOSTON – Through a groundbreaking initiative with the Government of Cuba, the John F. Kennedy Presidential Library announced that it is making available to researchers archival replicas of 3,000 letters and documents written by and to Ernest Hemingway while he was living at the Finca Vigía, the Nobel-Prize winning author’s home outside of Havana.

The treasure trove of documents includes the corrected proofs of The Old Man and the Sea, the ‘Final’ movie script based on that novel, an alternate ending to For Whom the Bell Tolls, and thousands of letters. Until now, these documents were only available to researchers who physically travelled to Cuba.

While the original papers will remain in Cuba at the archives of the Cuban National Ministry of Culture, beginning today researchers and scholars have access to color paper copies in Boston in the Hemingway Room at the John F. Kennedy Presidential Library, the world’s principal center for research on the life and work of Ernest Hemingway. A detailed list of the documents in this collection is available at www.jfklibrary.org under the Hemingway Archives’ Finding Aid.

“After Hemingway’s death in 1961, his widow Mary received support from the Kennedy administration to travel to Cuba and retrieve the majority of her husband’s papers,” explained Kennedy Library Director Tom Putnam. “We are honored to be the repository of those materials and the addition of these copies of the papers that were left behind helps to make the Hemingway Collection even more complete, providing unparalleled insight into Hemingway’s crucial years in Cuba from 1939 to 1960. I want to thank Congressman James McGovern who was so instrumental in facilitating this exchange with the Cuban government.”

“The preservation of these Hemingway materials is an extraordinary achievement, and I am honored to have played a small part,” said Congressman James McGovern. “I commend the people – Cuban and American – who have worked so hard to maintain Hemingway’s literary heritage as well as the Finca Vigía Foundation. I particularly want to thank Frank and Jenny Phillips and Mary Jo Adams for their tireless efforts. And it goes without saying that I can’t think of a more appropriate place for these treasures to be held than the Kennedy Library. I am hopeful that this collaboration can serve as a model for future cooperative efforts between the Cuban and American people.”

This unique bi-national collaboration stemmed from an agreement signed in November 2002 at the Finca Vigía by former Cuban President Fidel Castro, Sean Hemingway (Hemingway’s grandson), U.S. Congressman James McGovern, and representatives of the Finca Vigia Preservation Foundation and the Social Services Research Council (SSRC) who worked side by side with the Cuban officials in the scanning and microfilming process.

After Hemingway’s death, his widow, Mary Hemingway returned to the Finca Vigía and removed many of Hemingway’s manuscripts, letters, and paintings. She deeded the property and its remaining contents to the Cuban people, and the Finca Vigía was turned into a museum which has been carefully cared for over the years by Gladys Rodriguez Ferrero, the Finca’s curator.

With the support of Princeton Professor Stan Katz, chair of a team of scholars dedicated to stimulating intellectual and cultural exchange between the United States and Cuba, and the Social Science Research Council, a plan was developed whereby the documents would be digitally scanned in Cuba and converted to microfilm by the Center for Research Libraries. Archival copies of the microfilm would then be given to the Kennedy Presidential Library in Boston and to the National Council of the Cuban Cultural Patrimony. Scanning the originals is a means of preserving them, as now researchers in Cuba can work from archival replicas rather than handling the original documents.

Examples of the type of documents that are available to researchers in Boston include:

Mary Hemingway saw the Kennedy Library as a fitting place for her late husband’s papers due to the role President Kennedy played in helping her collect them after Hemingway’s death. In 1961, despite a U.S. ban on travel to Cuba (the result of high tensions between the two countries following the Bay of Pigs invasion), President Kennedy made arrangements for her to enter Cuba to claim family documents and belongings. While in Cuba, Mrs. Hemingway met with Fidel Castro who allowed her to take her husband’s papers and the artwork he collected in exchange for the donation of their Finca Vigía home and its remaining belongings to the Cuban people.

The John F. Kennedy Presidential Library and Museum is a presidential library administered by the National Archives and Records Administration and supported, in part, by the Kennedy Library Foundation, a non-profit organization. Appointments are required to do research in the Hemingway Collection. To learn more about the Hemingway Collection, or to find out how to make an appointment to conduct research, contact Susan Wrynn, Hemingway Curator, at (617) 514-1530 or susan.wrynn@nara.gov.