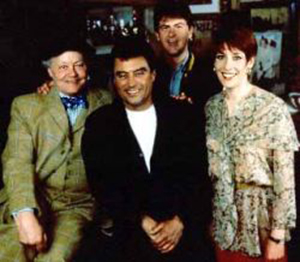 LONDON (ACNI) – The hit BBC series Lovejoy, which followed the escapades of a roguish English antiques dealer played by Ian McShane, isn’t exactly back on the table – but it hasn’t been ruled out, either.

In a recent interview with the British publication Radio Times, McShane was asked about the possibility of reviving Lovejoy and told the interviewer: “Sky (TV) talked about it last year. I said ‘If you’re serious about it, why not make it about Lovejoy’s daughter this time? And maybe I could do guest appearances on an antique Zimmer frame (walker). That’d be terrific.’”

It’s unlikely that the character Lovejoy will one day have a chance to rekindle the arms-length onscreen spark with Lady Jane Felsham that viewers so enjoyed. Scottish actress Phyllis Logan, who played the down-to-earth aristocrat Felsham, has since won international acclaim for her portrayal of Mrs. Hughes, the housekeeper on Downton Abbey.

McShane hasn’t been resting on his laurels, either. He’s been in constant demand since Lovejoy ended its hugely successful eight-year run in 1994. In the United States, he is perhaps best known for the role of historical figure Al Swearengen in the HBO series Deadwood, for which he won the 2005 Golden Globe Award for Best Actor in a Television Drama. He was also nominated for at the 2005 Emmy Award and Screen Actors Guild Awards.

Within the science fiction community McShane is best known for playing the character Robert Bryson, Ph.D. in Babylon 5: The River of Souls.