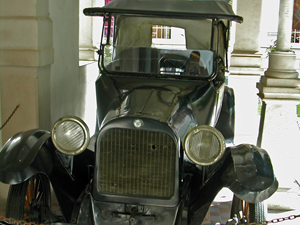 GREELEY, Colo. (AP) – George Bailey was driving the old black car the last time you saw it. He was drunk and crashed into the big tree on the outskirts of Bedford Falls, and then he ran to the bridge, where he was going to jump off and end it all.

That’s how the story began.

One of the most popular Christmas movies, It’s a Wonderful Life has been televised every year since 1970. The movie, starring Jimmy Stewart and Donna Reed, was made in 1946.

And on Christmas Eve, the old car that crashed into the tree arrived in Johnstown. Keith and Marilyn Smith bought the old 1919 Dodge that was featured in the movie, and they’re adding it to their collection of classic cars.

The fender of the Dodge, which was dented in the movie, has been fixed. As part of his hobby/retirement job, Keith Smith repainted the old car in the early 1990s, and this month, the couple bought it from a California car collector. It was delivered to their home west of Johnstown on Friday afternoon.

According to Smith, the movie wasn’t that popular when it was made, but because of a copyright problem, it was released again without restrictions in 1974.

“Every television network grabbed it and started showing it,” Smith said. “That’s why it became so popular.”

Republic Pictures restored its copyright claim to the film in 1993, with exclusive video rights to it. Currently, it can be shown only on NBC, and its distribution rights belong to Paramount Pictures.

To prove they have the right car, the Smiths have the original title to the car, which lists the matching motor number in 1946. In that case, the owner is listed as “20th Century Fox,” the studio that made the film.

Before selling it to the Smiths, the California collector had owned it for 38 years. It has been in a few car shows, and it once appeared on The Lawrence Welk Show on TV.

Keith Smith is a retired financial planner, and the couple now does “woodgraining” for cars as a second occupation and hobby.

Woodgraining is used in many older cars, and involves painting metal to match the original wood in the older, luxury cars. Marilyn is the artist and designs the wood grain, which Keith etches into the metal. They’d done some woodgraining for the collector in California, and that’s when they learned about the Wonderful Life car.

The Smiths wouldn’t say how much the car cost them, but Keith said they could have bought some nice income property for the same price.

But owning the classic movie car is important to the couple, who live in a restored 1909 farmhouse west of Johnstown, Colo. Their car collection includes a 1928 Nash, a ’48 Lincoln Continental and pickups made in 1953 and ’56, among others.

A car enthusiast, Keith does much of the restoration himself, something he has always loved. He did his first woodgraining of a dashboard when he was 16 years old, living in Greeley.

Besides owning the classic car from the classic movie, the couple made friends with one of a few stars of the movie who is still living. Carolyn Grimes, now 70, played Zuzu in the movie and spoke the famous line at the end:

Zuzu Bailey: “Look, daddy!” she says when a bell on the Christmas tree rings, “Teacher says, every time a bell rings an angel gets his wings.” 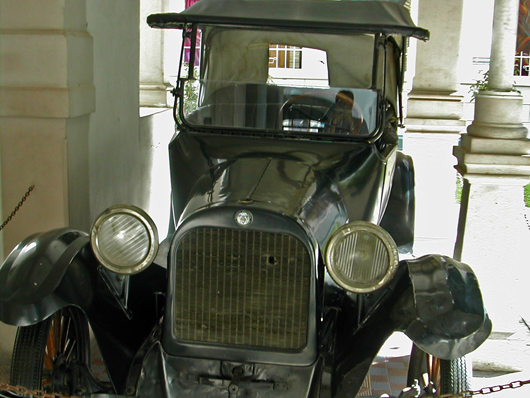