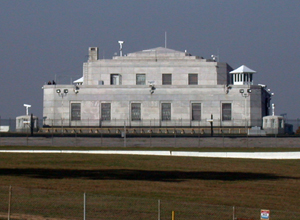 The U.S. Gold Bullion Depository at Fort Knox. This file is licensed under the Creative Commons Attribution 2.0 Generic license.

FORT KNOX, Ky. (AP) – Few military posts have a place in pop culture as rock solid as Kentucky’s Fort Knox, thanks to its mysterious gold vault.

The name of the historic base is practically synonymous with impenetrability. In addition to housing the Treasury Department’s U.S. Bullion Depository and its stacks of gold, the Army’s tank training school was started at Fort Knox. And the sprawling central Kentucky Army post has been the setting for blockbuster Hollywood films.

But Knox’s days as a war-fighting post may be over with the Pentagon’s decision last week to strip its only combat brigade, which follows the loss of its famed armor school and thousands of tank personnel just a few years ago. The base will remain the site of the gold vault, but otherwise it could be destined to function less as a tip-of-the-spear military facility and more as a home to office and support workers.

Many of those workers file into a nearly million-square-foot structure on post that was completed a few years ago, but the massive building doesn’t seem destined to unseat the vault as the symbol of Fort Knox.

“It is kind of an icon. Most people when they see the outline of the depository, they know what it is,” said Harry Berry, a retired Army lieutenant colonel who is now judge-executive in Hardin County. “When you think about Fort Knox, if you don’t have a military background, you instantly think about gold or Goldfinger,  the 1960s James Bond film.

The Pentagon announced last week that it was eliminating Knox’s 3rd Brigade Combat Team, 1st Infantry Division as part of a major restructuring that will reduce the Army’s active duty combat brigades to 33 from 45. The cuts will reduce the size of the Army from about 570,000 in the midst of the Iraq war down to 490,000, which includes personnel in units that support the brigades.

For some posts, that means the loss of a few hundred soldiers, but in Knox’s case it’s a cut of more than 40 percent to its active duty force and nearly a total elimination of its fighting personnel. Kentucky Gov. Steve Beshear puts the figure at about 10,000 lost troops and their families leaving Knox and the surrounding area.

Gen. Ray Odierno, Army chief of staff, said the military was not moving toward closing Knox: He pointed out that the Army’s recruiting and human resource commands have relocated there since a major Army realignment almost a decade ago.

Baldy Carder, who owns a tattoo parlor in nearby Radcliff, said he’s not worried about the post closing—a “because of the gold reserve.” But he said his business could take a hit since about half his customers come from the post.

“When you’re talking about 10,000 people leaving, that’s quite a chunk of change that we’re going to be losing,” he said.

Fort Knox’s own estimates project that its annual economic impact will shrink from about $2.8 billion a year to $2.62 billion upon the brigade’s departure, said Ryan Brus with the post’s public affairs office. That’s a decrease of more than 6 percent.

Much of Knox’s future is invested in the home for the Army’s Human Resources Command, which opened in 2010. The gleaming structure is the largest office building in Kentucky and one of the biggest in the military.

The work going on inside is a far cry from the military post’s heyday when tanks and infantrymen roamed the grassy hills. Knox was known as the home of the Army’s tank and armored vehicle training for more than seven decades, before the Pentagon completed the move of the school to Fort Benning, Ga., in 2011.

Lonnie Davis hated to see the tanks go. Aside from the lost business for his Radcliff barber shop, the Kut Zone, he had a 20-year career in the Armored Division at Knox.

“That’s why I went into Armor, to stay close to home,” Davis said.

Today, the Gen. George S. Patton Museum and a scattering of aging tanks and armored vehicles sprinkled around the post are only remnants of that past.

Inside the museum, which just finished a $5 million renovation, visitors learn about the post’s history, and tucked away in a small corner is a tribute to its Hollywood past. That started with The Tanks Are Coming, a 1951 film about a tank crew fighting its way into German territory. Bill Murray’s comedy Stripes was released in 1981, with Knox doubling as the fictional Fort Arnold where Murray goes through basic training.

But the most iconic film shot at the post was 1964’s Goldfinger, with Sean Connery in the role as 007, tasked to stop a madman from destroying the country’s gold reserves.

The movie helped spur curiosity about Knox’s gold vault, which opened in 1937. Its seemingly impregnable walls ushered Fort Knox into the American lexicon as a way to describe a safe and secure location.

During World War II, the gray stone fortress housed documents including the U.S. Constitution and the Declaration of Independence. The U.S. Treasury Department says on its website that there are now 147 million ounces of gold inside, with an estimated worth of more than $160 billion at today’s prices.

But the gold stays inside, and the bullion depository is not a tourist attraction: No visitors are allowed in.

Berry and Davis said Knox’s future success could depend on adding staff to Human Resources Command along with other administrative-oriented missions. The post’s total workforce now is about 20,000, including active duty and civilians.

“We’ll gain from that as opposed to the green-suit side, if you will,” Berry said. 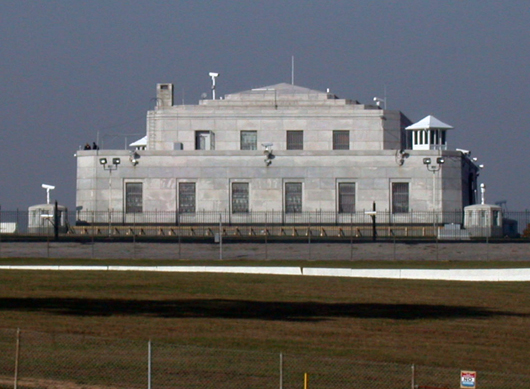 The U.S. Gold Bullion Depository at Fort Knox. This file is licensed under the Creative Commons Attribution 2.0 Generic license.