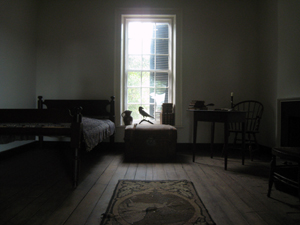 Edgar Allan Poe’s room is one of the most visited sites at the University of Virginia. This file is licensed under the Creative Commons Attribution 2.0 Generic license.

RICHMOND, Va. (AP) – An honor society that bears the name of one of Edgar Allan Poe’s major works is planning to renovate the room where the renowned poet and mystery writer lived during his short stint as a student at the University of Virginia.

The Raven Society won a $15,500 grant from an endowment established by the University of Virginia Alumni Association to refurbish Poe’s room at 13 West Range. Work is to begin this summer as part of a broader renovation of a handful of nearby student rooms at the Charlottesville school.

Clark Herndon, who just ended his term as the society president, said the project includes refinishing the room’s wood floor, painting, upgrading the lighting, installing a small mantel around the fireplace and replacing a decades-old sound system that plays a recording for visitors about Poe’s 10-month stay at the university in 1826.

After the renovation is complete, Raven Society members will work with U.Va.’s preservation experts to determine the historical accuracy of the room’s furnishings, which include a bed, a small writing desk, a washbasin and a bust of Pallas – a reference to where Poe’s talking bird perches in The Raven.

“The leatherbound foot locker, for example, may be replaced with a wooden chest,” said James Zehmer, U.Va.’s historic preservation project manager. “And there’s a chair or two that might not be quite accurate.”

The Raven Society was founded in 1904 by 12 original members. After the election of new members each semester, the society conducts a ceremony in Poe’s room that includes the reading of a stanza of The Raven, Herndon said. It’s the only time people are allowed in 13 West Range – visitors typically must view the room through a glass door.

The honor society acquired the duty of maintaining 13 West Range in 1907, and the room has undergone changes over the years to make it resemble student rooms when Poe lived there. The room was renovated again in the 1950s to remove a mantel and closets that were added after 1826.

Poe enrolled at U.Va. in February 1826, not long after Thomas Jefferson founded the school, and professors quickly recognized his academic excellence. At the time, there were 177 students, and their rooms all lined the university’s Lawn and Range, U.Va. officials said.

The 17-year-old student became active in university life, including becoming a member of the Jefferson Literary and Debating Society, and entertaining friends in his room with dramatic readings of short stories that bore the hallmarks of his later writings. But his time in Charlottesville didn’t last, as he was plagued with financial difficulties caused in part by his foster father’s refusal to cover all his expenses, and in part by heavy gambling. He withdrew permanently from the school that December.

He published his first works, Tamerlane and Other Poems, in 1827.

Poe is credited with writing the first modern detective story, The Murders in the Rue Morgue, which appeared in 1841 in Graham’s Magazine, where Poe worked as an editor. It became the template for other writers’ mystery stories, including the Sherlock Holmes works.

Other Poe works include The Tell-Tale Heart, The Fall of the House of Usher and The Pit and the Pendulum, which have frightened generations of readers and reflected his struggles with depression, difficulties with drinking and the loss of key figures in his life. Those struggles worsened, and he died at the age of 40.

Today, the Poe room joins the Rotunda as one of the University of Virginia’s most-visited sites. 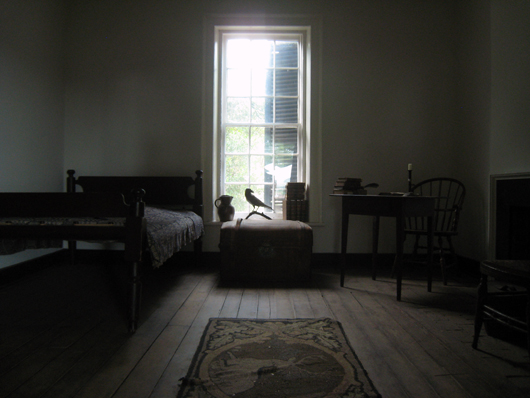 Edgar Allan Poe’s room is one of the most visited sites at the University of Virginia. This file is licensed under the Creative Commons Attribution 2.0 Generic license.

Handwritten poem by Poe sells for $300K at auction