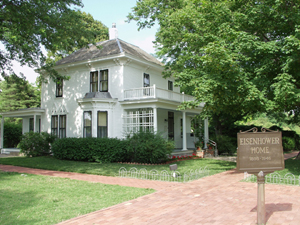 ABILENE, Kan. (AP) – Staff members at the Eisenhower Presidential Library and Museum in Abilene are gearing up for two days of activities to commemorate the 70th anniversary of the D-Day landing in France.

The events June 6-7 are an extension of a three-year exhibit at the complex to tell the story of World War II.

President Dwight D. Eisenhower was the supreme Allied commander of Europe in World War II who led the invasion in 1944 that would lead to Germany’s surrender less than a year later. Eisenhower also served as the first military governor in postwar Germany.

Karl Weissenbach, director of the Eisenhower library, said Friday the events were meant to thank veterans for their service and to explain the significance of World War II to younger generations.

“I worry that the current generations don’t have an understanding about World War II and the aftermath. It’s amazing how few can answer simple questions about World War II,” Weissenbach said. “They should be well-grounded in that period of time.”

Events to mark D-Day include a panel discussion, a symphony concert, military re-enactors, static vehicle displays and a flyover by six C-47 transport planes similar to those used during the invasion to drop paratroopers over the French coast. The invasion involved nearly 133,000 American, British and Canadian soldiers landing on five beaches, backed by 7,000 ships and landing craft in the English Channel.

Weissenbach said the exhibit launched in 2013 has drawn interest from veterans who often share stories about where they were during the war and tell him more about particular battles or events.

“It’s a great feeling and it makes this exercise worthwhile,” he said.

The World War II exhibit has also allowed the staff to use the library for displays. Typically, activities are confined to special gatherings in the atrium or researchers poring over Eisenhower’s millions of pages of records from his military and presidential careers.

‘It’s such a large story that we are utilizing as much space as we can,’ Weissenbach said.

A current exhibit from Poland features art created by prisoners in the Auschwitz concentration camp. Weissenbach said the art expresses the pain felt by prisoners, who risked being killed for creating the works.

The museum and library are located near Eisenhower’s boyhood home in Abilene, a town of about 6,800 residents in north-central Kansas. Eisenhower established the museum on the grounds to display military equipment and his war records in 1962. He died in 1969 and is buried with his wife and first son on the grounds. 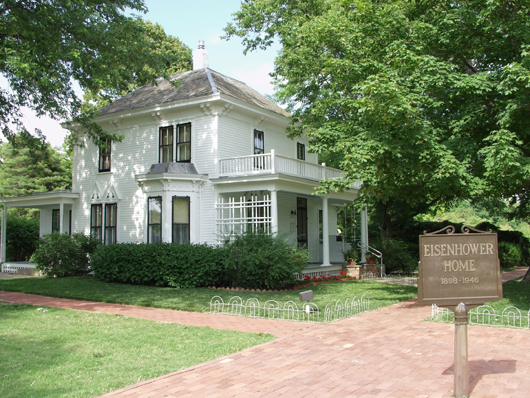