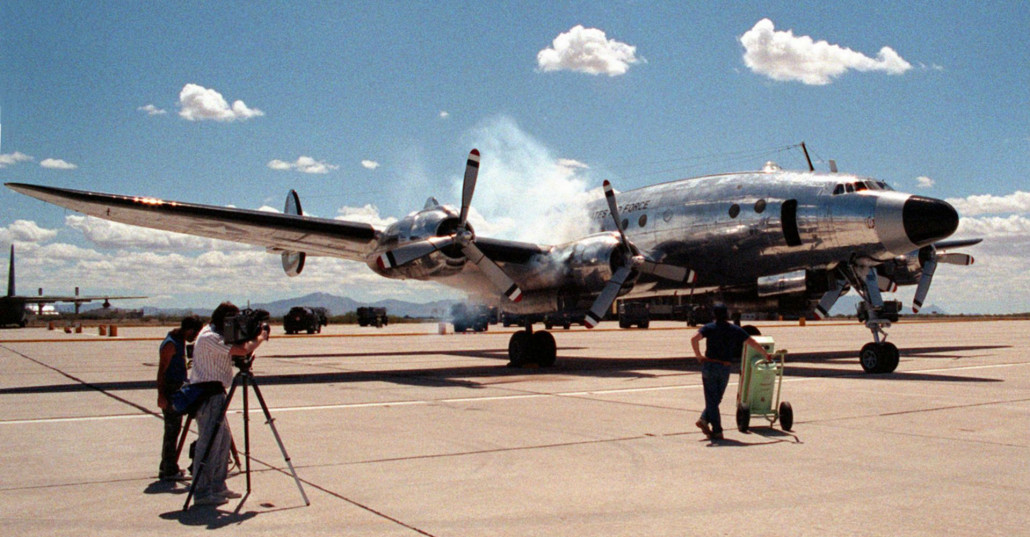 BRIDGEWATER, Va. (AP) – It was a project so big, Karl Stoltzfus said, that he wasn’t thrilled about undertaking it.

But facing the prospect that the first plane known as “Air Force One” – an aircraft that shuttled President Dwight Eisenhower around the globe – could wind up on the scrap heap, it was a project he couldn’t resist.

Sometime next month, Stoltzfus expects to have the Columbine II flown from Marana Regional Airport in Marana, Ariz., to Dynamic Aviation’s headquarters in Bridgewater. Once there, efforts will be taken to restore the 1948 Lockheed C-121 Constellation to its former glory.

The 75-year-old founder and board chairman of Dynamic Aviation said the convergence of his loves of aviation and history piqued his interest in saving the Columbine II, because the aircraft can help illustrate the Eisenhower era for young people. But it wasn’t until he saw the then-decrepit plane sitting unsheltered at the Arizona airport that he knew it was a calling.

“I went out and looked at it, evaluated it, looked at it for a couple of hours,” Stoltzfus said, “and I just absolutely knew in my heart that I was supposed to do it.”

Eisenhower was aboard Columbine II over New York City in December 1953 when air traffic controllers briefly confused the plane, known to them as “Air Force 8610,” with Eastern Airlines flight 8610, according to the White House Museum.

The aircraft nearly collided, and afterward, the president’s airplane became known as “Air Force One.”

Mel Christler bought the airplane at a U.S. Air Force auction in 1970 and scavenged parts from it for a decade before learning of its history, according to a town of Marana news release. It took 10 years to get it back into flying shape, and he showed it for 15 years before parking it outdoors at the airport just northwest of Tucson.

The Columbine II came on Stoltzfus’s radar in October 2014, when he read an aviation magazine article about the owner’s decision to sell or scrap it. He said he hoped someone would buy and preserve the plane, but he didn’t want to be that guy.

Eventually, though, he called and learned that no one had come forward. The thought of Eisenhower’s plane winding up as scrap metal bothered him.

“I didn’t want to see somebody drinking a beer,” Stoltzfus said, “and wonder if the beer can came from that plane.”

He asked his twin brother, Ken, to take a look at the aircraft. The sellers agreed to allow a three-month inspection, and Dynamic Aviation mechanics were sent out West to look it over and start repairs.

Stoltzfus said he thought the reclamation project was “impossible” when he first saw the plane, but he changed his mind after about 24 hours.

“Everything,” he said, “was overcome-able.”

That decision came at a price, one Stoltzfus said he can’t divulge because of contract terms. But he said he paid a bit less than the $1.5 million asking price.

“It’s a substantial investment,” Stoltzfus said of what’s been spent on the project to date.

Brian Miklos, who’s in Arizona leading the repair efforts for the company, said in a phone interview Tuesday that he didn’t know anything about the aircraft until Stoltzfus showed him the magazine article and said he was interested in buying it and bringing it to Bridgewater.

“He was smiling from ear to ear and asked me what I thought about it. I looked at the photo and thought it could be broken into sections, so I told him we’d be able to truck it home. He said, ‘No, I want to fly it.’ It’s been a big adventure since then.”

An aircraft production and maintenance support manager who lives outside Bridgewater, Miklos said crews of four to 15 people have worked on the plane, usually spending three weeks out West and returning home for three weeks.

Though it hasn’t been off the ground, he said he “wouldn’t be afraid” to fly in the Columbine II back to Bridgewater at this point. Its four engines work and its systems are operational, but more work will be done before the nearly cross-country journey begins.

The biggest repair challenges, Miklos said, have been finding parts and information about a plane that’s nearly seven decades old.

“Lockheed manufactured the aircraft, but there’s no support for it,” he said. “There are some old guys who have been around who know the planes. But there’s been a lack of true support, so we’ve had to learn things as we’ve gone along. We’ve had to be creative at times.”

Though the plane won’t leave that day, Marana will say goodbye to the Columbine II on March 18. The town is organizing a farewell reception for media, elected officials and others at the airport.

Sometime thereafter, the Columbine II will rise from the ground and head east. Stoltzfus said he has stops he wants to make in New Mexico and Texas because of the amount of interest there’s been in the plane from aviation enthusiasts and others.

Nearly 7,600 people had “liked” the facebook.com/firstairforceone page as of Tuesday evening.

Miklos regularly travels the world to repair planes for Dynamic Aviation, but he said this job is different. He considers it an honor to have his name in the maintenance logbook of an aircraft that once carried America’s 34th president.

“This is Air Force One. This is an airplane the president rode on, and other dignitaries and officials,” he said. “It’s not just a commercial airplane – it’s an airplane that represents America.”

Once in Bridgewater, Stoltzfus said, the project would become more of a cosmetic restoration effort than a repair. He’s researched the Columbine II and found color and fabric information and wants the makeover to be as authentic as possible.

He’s also collecting memorabilia related to the plane and its famous primary passenger to establish a small museum at Dynamic’s offices, where the plane eventually will be open to the public. Mary Jean Eisenhower, the president’s granddaughter, is helping with that effort.

Stoltzfus plans to take the Columbine II to air shows, too, but he said it might be two years before it’s in the condition he’d like to exhibit it in such a manner.

He said he considers opening the plane to the public an obligation because of its importance, and he’s glad to be able to bring it home.

“It’s a very worthwhile project,” Stoltzfus said. “In a certain way, it puts Bridgewater on the map from an aviation standpoint. It’s one of the most interesting planes historically.”