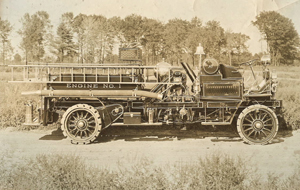 There, firefighters are nearing the end of a project that began more than a decade ago – restoring an 87-year-old fire truck.

Countless hands have been laid on the 1924 Foamite-Childs Fire Apparatus Truck since a citizen donated it to the department in 1999.

The truck was first stored at Station 6, where firefighters stripped it to the frame, sand-blasted wood floors and running boards, and rechromed the steering column, rails and other parts.

They tinkered when time permitted over the next few years, but then the project ground to a halt. Personnel transferred to other stations, were promoted to other duties and even retired.

After the roof of Station 6 collapsed during a heavy snowfall in 2009, the vintage truck was moved to Station 5, where it continued to sit.

Then, about six months ago, Lt. David Barber told a bunch of co-workers it was time to revive the restoration project, and the Foamite-Childs truck was moved to Station No. 2 at Atlanta Highway and Mitchell Bridge Road.

“Everybody was on board with that,” said fire Sgt. Randy Patman, who was part of the group that first began working on the truck 12 years ago.

“I hate to see things that are good go to waste, and I hate to see history thrown away,” he said. “Restoring this truck took a lot of work, but in the end it’s worth it, because it’s an asset to the fire department.”

The Foamite-Childs fire truck was one of only two ever built by the company in Utica, N.Y.

It seats just two, a driver and a passenger, but back in the day, as many as 10 firefighters might have clung to railings as they stood on the running boards racing to a fire.

Athens resident Patty Curtis was going through the classified section of the newspaper one day in the early 1970s, looking for antiques that she and husband Jack loved to collect.

She came across an ad for the 1924 fire truck, which a University of Georgia student was selling, so she bought it as a present for her husband, who owned The Stone Store.

“I said, ‘Jack, you need some fire protection for the farm’” that the couple own in Greene County, she said.

But before the couple got the truck to the farm, they were driving it on Milledge Circle when they nearly lost control around a corner because the brakes were bad.

“It was our one and only drive,” Patty Curtis said.

The Curtises knew the truck would need a major overhaul to be safe, but they never had the time or money to fix it up.

And so the Foamite-Childs truck sat in their barn for more than 25 years.

Then, in 1999, they read a story in the newspaper that some firefighters had restored the oldest fire truck in the Athens-Clarke inventory, a 1962 pumper.

“Since we didn’t have the time to restore it, we thought we’d give it to the firemen because we knew they’d enjoy it,” Patty Curtis said.

“When I walked into Station 6 and saw that antique truck parked behind the 1962 truck, I said, ‘What in the world is this?’” Patman recalled. “It was a real nice surprise.”

Patman and fellow firefighters David Smith, Eric Frye, Blake Doster and Mike McDaniel came together to fix it up just as they had the 1962 pumper.

Each man had experience in various types of restoration. One tinkered on old cars, another rebuilt jukeboxes, and another antiques. Others had professional experience refurbishing metal pieces and in auto paint-and-body repair.

The new restoration project was much more of a challenge. Unlike the 1962 pumper, the Foamite-Childs truck’s engine didn’t run because it had seized.

As the antique was dismantled, each piece was photographed and inventoried.

As the paint was sandblasted from the body, they discovered the truck hadn’t come from the Goshen Volunteer Fire Co., as the faded lettering had said.

And no one knew which Goshen, as there are several towns with that name on the East Coast.

The original paint job underneath stated the truck had belonged to the Independent Steam Fire Co. in Charles Town, W.Va.

While passing through on a trip up North, Smith stopped by the fire department in Charles Town.

“I told this guy we had an old fire truck from his town back in Athens, Ga., and as we were talking, I saw some photographs hanging on the wall, and I told him, ‘As a matter of fact, that’s the truck right there,’” Smith said.

When the Foamite-Childs truck is fully restored, at least 95 percent of it will be original parts, according Barber.

Smith found hose nozzles, extinguishers and other odds and ends at a fire exposition in Boston, and Patman ordered other parts he found online.

But putting back each little part was a challenge, because over time, the writing on tags explaining where the parts belonged had faded.

“It’s like trying to put together a jigsaw puzzle upside down, without a picture to go by,” Patman said.

Firefighters turned over the engine for the first time last week, but it remains to be seen if it will be road-worthy.

The idea is to drive it in local parades and use it for fire education, according to Battalion Chief Mark Freeman.

Firefighters expect the Foamite-Childs truck should be fully restored by early spring, and Jack Curtis hopefully will be able to fulfill the only wish he had when donating it to the fire department – to ride on it in a parade.