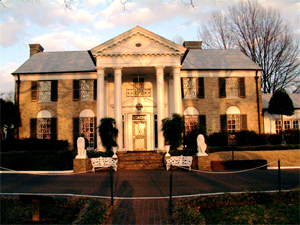 Graceland, the Memphis home of Elvis Presley, is unaffected by the Mississippi River flooding. This file is licensed under the Creative Commons Attribution 2.5 Generic license.

MEMPHIS, Tenn. (AP) – The Mississippi crept toward the highest level ever in the river city, flooding pockets of low-lying neighborhoods and forcing hundreds from their homes, though the water was not threatening the music heartland’s most recognizable landmarks, from Graceland to Beale Street.

As residents waited for the river to reach its peak as early as Monday night – several inches short of the record mark set in 1937 – those downstream in Mississippi and Louisiana evacuated prisoners and diverted water from the river in an attempt to stave off catastrophic flooding in a region prone to such disasters.

In Memphis, emergency officials warned the river was still dangerous and unpredictable, but they were confident the levees would hold and there were no plans for more evacuations. Sandbags were put up in front of the 32-story tall Pyramid Arena, but the former home of college and professional basketball teams was believed to be safe. Also out of the way were Stax Records, which launched the careers of Otis Redding and the Staple Singers, and Sun Studio, which helped make Elvis the king of rock ’n’ roll.

Sun Studio still does some recording, but Stax is now a museum and tourist attraction. Graceland, which is several miles south of downtown, was also spared.

“I want to say this: Graceland is safe. And we would charge hell with a water pistol to keep it that way and I’d be willing to lead the charge,” said Bob Nations Jr., director of the Shelby County Emergency Management Agency.

Authorities spent the weekend knocking on doors to tell a couple hundred more people that they should abandon their homes before they are swamped by waters. More than 300 people were staying in shelters, and officials said they had stepped up patrols in evacuated areas to prevent looting.

Aurelio Flores, 36, his pregnant wife and their three children have been living at a shelter for 11 days. His mobile home had about four feet of water when he last visited the trailer park Wednesday.

“I imagine that my trailer, if it’s not covered, it’s close,” said Flores, an out-of-work construction worker. “If I think about it too much, and get angry about it, it will mean the end of me.”

He was one of 175 people staying in a gymnasium at the Hope Presbyterian Church in east Shelby County. He said morale was good at the shelter, mostly because there were friends and neighbors staying there, too.

“The main thing is that all left that trailer park with our lives,” Flores said. “God will help us find a new place to live.”

Forecasters said it looks like the river was starting to level out and could crest at or near 48 feet, just shy of the 48.7-foot mark set in 1937. Forecasters had previously predicted the crest would come as late as Wednesday. On the horizon, however, rain was forecast for later in the week, which could bring the danger of flash flooding.

Kevin Kane, president and chief executive of the Memphis Convention and Visitors Bureau, said he believed the media had overblown the flooding.

“The country thinks were in lifeboats and we are underwater,” Kane said. “For visitors, its business as usual.”

While some evacuated, others came as spectators. At Beale Street, the famous thoroughfare known for blues music, people gawked and snapped photos as water pooled at the end of the road. Floodwaters were about a half-mile from the Beale Street’s world-famous nightspots, which are on higher ground.

Graceland, the Memphis home of Elvis Presley, is unaffected by the Mississippi River flooding. This file is licensed under the Creative Commons Attribution 2.5 Generic license.[/caption]