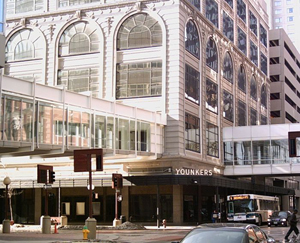 The former Younkers department store in downtown Des Moines, where the Tea Room will reopen soon. Image by Iowahywman at en.wikipedia. This file is licensed under the Creative Commons Attribution-Share Alike 3.0 Unported license.

DES MOINES, Iowa (AP) – It’s been eight years since the scent of cheese sauce wafted off a rarebit burger in the old Younkers Tea Room in Des Moines.

It’s been three decades since models clad in Geoffrey Beene dresses strolled a catwalk in the iconic space.

And it’s been even longer since the Tea Room hosted a who’s who of Des Moines inside an anchor of a vibrant downtown shopping scene.

But if the plaster faces peering down from the columns here could talk, they no longer would be confined to discussing the Tea Room’s storied past. They could speak of its future.

The Des Moines Register reports that as part of a plan to convert most of the old Younkers building to apartments and retail space, the project developer, the Alexander Co., has decided to restore the once-glitzy dining space to the way it felt nearly 80 years ago. It will reopen as a full restaurant or an events space for weddings and other special occasions when the overall building renovation is completed in late 2014, the company says.

In an exclusive tour with The Des Moines Register, the developer highlighted which features in the Tea Room will stay, which will be updated and how researchers are delving into the building’s history to make those decisions.

“I think when it was first really popular in the ’50s, people older than we would say they had their first elegant lunch with their grandmother – white gloves and chicken salad was the tradition,” said James Spizale, a visual merchandiser who worked at the store in the ’80s. “I have a lot of memories there.”

Some of them interviewed by the Register voiced excitement about its planned reopening.

“It was part of Des Moines’ culture and history,” said Connie Boesen, a former Younkers employee who spent 34 years with the company. “I’m very excited that they’re revitalizing the building. Hopefully it will be the catalyst to even more downtown renovation.”

The Alexander Co., based in Madison, Wis., specializes in historic preservation. David Vos, a project manager with the company, says its goal is for the space to feel just as Iowans remember it.

“We’d be strung up on a noose if we changed it,” he said, standing inside a Tea Room that today is empty, dirty and dark.

For the company, preserving the Tea Room is part of cobbling together the $36 million required to renovate the building. The company will receive $15 million in state and federal historic tax credits for preserving historically important parts of the building.

The Tea Room is one of those historically important parts, Vos said.

But when restoring and preserving a century-old space, just which version does a developer preserve? Does the Tea Room get restored as it was on its opening day in 1913, with oak tables and chintz draperies?

Or should it be restored as it was in the 1970s and ’80s, when reflective mirror windows replaced French-style ones to give the building an updated, more modern look?

The answer is a little bit of both, Vos said, because of complex standards required in the tax credits process. How closely the Tea Room matches memories will depend on just when the visitor experienced it.

The Younkers building’s restoration will be informed largely by the work of James Jacobsen, a preservation consultant who helped prepare the building’s applications both for historical tax credits and its place on the National Register of Historic Places.

The effort involved extensive research into the Tea Room’s past, piecing together what it looked like through a patchwork visual history of old postcards, photographs and building permits – whatever documentation could be had.

Unlike the rest of the Younkers building, the Tea Room remained relatively untouched for decades.

The original finishes are all still here. Most of the walls and the ornate decorations on them remain original to the building and will be touched up and preserved, Vos said.

Some updates that aren’t original or significant to the building will be nixed, Vos said, including mirrors on some walls and ventilation panels covering a radiator.

The walls’ cream and red paint job and the worn carpet – easily changeable features – aren’t restricted by preservation rules and can be changed. Large chandeliers sold at an auction in 2005 will be replaced either with reproductions or with similar but more modernized versions.

The most dramatic change will come with restoration of the room’s original windows with French doors, and the addition of balconies outside each door, all features from the space’s earliest decades, Vos said.

All in all, the blend of original and restored elements should create the visual feel reminiscent of the Tea Room’s heyday in the 1930s, Vos said, a period at the peak of what researchers had to justify as the Younkers building’s “period of significance.”

So what will residents notice when they visit the new Tea Room in 2014? Vos’ hope: What they remember from decades past and nothing more.

But can a restored Tea Room be a viable enterprise?

After all, the Younkers building, its Tea Room and downtown retail suffered a gradual decline over the past quarter century or more as malls lured shoppers to the suburbs.

“A lot of people will tell you it really faded in its last five years,” said Wini Moranville, an expert on central Iowa’s dining scene and previously a food writer for the Register. “In fact, I never reviewed it because it was so heartbreaking compared to what it had once been.”

Moranville suggests the best bet for the Tea Room’s future will be as an events space rather than a restaurant.

Even venerable establishments like the Savery Hotel are updating their bars to look more 2013 than 1913, she noted. But as an events space, the revamped Tea Room could tie visitors to a key time in Des Moines’ cultural history, she said.

“I think it might be kind of hard to get people up to the Tea Room (as a restaurant), but that’s not to say they shouldn’t try,” she said. “I would be first in line.” 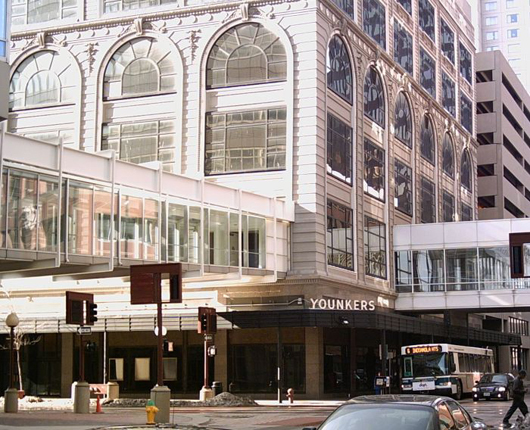 The former Younkers department store in downtown Des Moines, where the Tea Room will reopen soon. Image by Iowahywman at en.wikipedia. This file is licensed under the Creative Commons Attribution-Share Alike 3.0 Unported license.

Historic Motown Steinway piano back in Detroit
Scroll to top