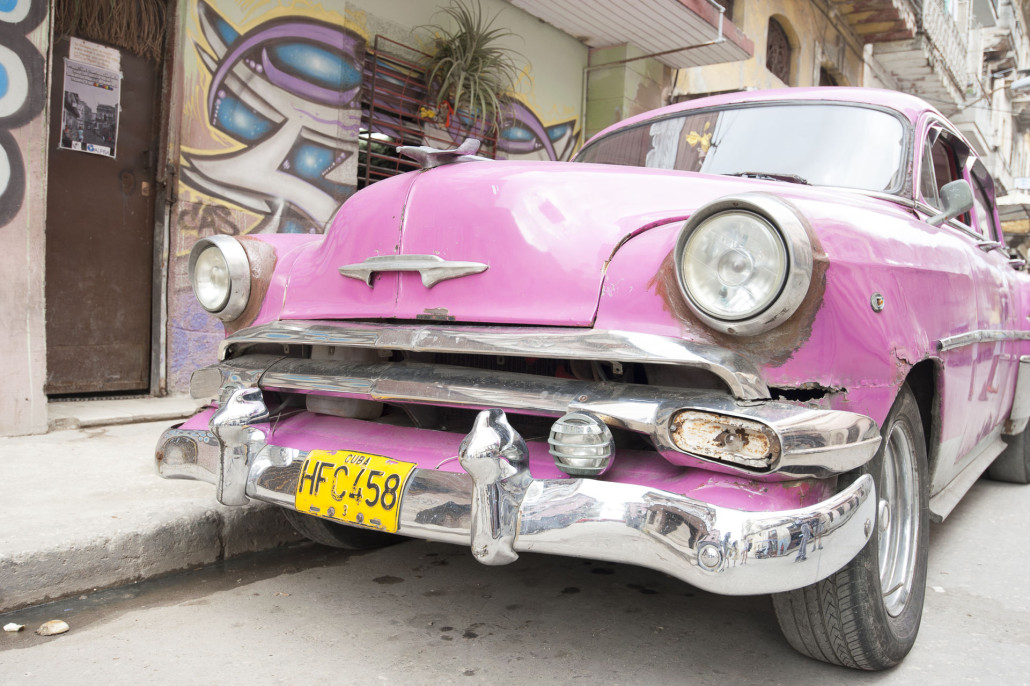 Classic car collectors are among those who are anxious for the export restrictions to be lifted in Cuba. Shown here is a pink 1950s-vintage Chevrolet parked on a street in Cuba. Photo by MiltonPoint, licensed under the Creative Commons Attribution-Share Alike 4.0 International license.

PARIS (AP) – France called on the U.S. to lift the economic embargo against Cuba during a historic state visit Monday by the Caribbean island’s president aimed at boosting economic relations between Havana and Paris.

Raul Castro’s trip comes after a breakthrough deal was reached in the French capital in December to lighten Cuba’s foreign debt.

French President Francois Hollande, the former leader of France’s Socialist party, greeted Castro on Monday with a warm hug in the courtyard of the Elysee presidential palace, and then started the meeting saying “Vive Cuba!” (”Long live Cuba!”).

Both presidents vowed to develop economic, political and cultural ties during a joint news appearance.

The U.S. announced a normalization of relations with Cuba in December 2014, but it still maintains an economic embargo on the island.

Hollande told journalists that “President (Barack) Obama … must now follow through and allow this vestige of the Cold War to end.” France has called for the lifting of the U.S. embargo since 1991.

“We appreciate France’s traditional position in favor of the lifting of the economic, commercial and financial embargo from the United States against Cuba, which is the main obstacle to the development of our country,” Castro said.

Cuba wants “to diversify the bilateral relation with France in all its dimensions: political, economic, business, financial, academic and cultural cooperation,” he said.

The Cuban president was to attend a state dinner in his honor later Monday.

Castro, 84, is on his first state visit to Europe since taking over from his elder brother Fidel in 2006. The Cuban president briefly stopped in Rome last year to meet with Pope Francis.

Hollande was the first French leader to visit Cuba in a half-century when he went in May seeking to boost trade.

In December the Paris Club of creditor countries forgave $8.5 billion of overdue Cuban interest payments in exchange for Cuba’s promise to pay off $2.6 billion in loans from developed countries over the next year and a half. France, to which Cuba owed $4 billion in overdue loans, led the creditors’ negotiations.

A new bilateral deal regarding Cuba’s remaining debt to France, which amounts to $390 million (360 million euros), was signed Monday. With this agreement, Paris agrees to convert 212 million euros ($230 million) into a fund that will finance French-Cuban projects on the island.

Another agreement allows France to open an office of the French Agency of Development in Havana. The public financial institution can make loans to public and private bodies to support development projects.

French companies are looking for business opportunities to open up in Cuba, especially in the tourism, transport, food and environmental industries. The number of French visiting Cuba in 2015 increased by 30 percent compared with previous years.