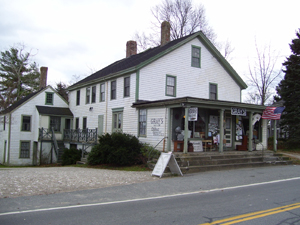 Grays General Store (1788) in Adamsville, R.I., is billed as the oldest continuously operating general store in the United States. This work is licensed under the Creative Commons Attribution-ShareAlike 3.0 License.

At the Mansfield (Conn.) General Store, it’s not just basic groceries, takeout sandwiches and antiques. They have live music twice a week, including flamenco guitarists on Friday afternoons.

At Hastings Store in West Danville, Vt., co-owner Garey Larrabee is also the postmaster and cook, running a full-service post office and cooking up old-fashioned doughnuts for the regulars who come in to catch up on gossip and pick up mail, lingering around the wall of boxes with the three-digit dial combination locks.

His wife, whose family has run the place for almost 100 years, is a justice of the peace. She sometimes marries people, right there in the store.

Turns out, New England’s general stores aren’t as general as they used to be.

With their creaky wooden floors, old-fashioned keepsakes and inventory that runs the gamut from snow shovels to wedding dresses, they rely on nostalgia and creative specialties to compete in a Walmart world.

“The best of these stores are the heart of their communities,” said Paul Bruhn, executive director of the Preservation Trust of Vermont. “They’re the places where people gather, connect with each other. They really make a place a community.”

“We sell the past,” said Mary Anne Boyd, who runs The Brewster Store, a summer institution on Massachusetts’ Cape Cod.

In Little Compton, R.I., Gray’s Store, which dates to around 1788, brings them in with an old-fashioned marble soda fountain, cigar and tobacco cases, and Rhode Island johnnycakes (corncakes). Its owners proudly call it the nation’s oldest operating general store in America, though others have staked similar claims.

Whichever was first, Gray’s is the real thing: It’s one part museum and one part country store, with gifts, collectibles and vintage retail products like Lux dishwashing liquid.

“Everything’s just as it was 100 years ago,” says owner Grayton Waite, 59, whose great-great-grandfather bought the place in 1879.

In Mansfield, Conn., the Mansfield General Store is a relative newcomer to the tradition. Located in a 19th-century house just down the road from the University of Connecticut, it offers basic grocery and bakery items as well as salads, soups and takeout deli food.

Sisters Lisa Rich and Keleigh Shumbo, who opened it three years ago, also peddle antiques, books and flowers, and offer live music on Friday afternoons and Sunday mornings. The Sunday morning brunch, which is $10, comes with local musicians who sing for their supper.

Up on the Cape, the Brewster Store in Brewster, Mass., a former church building that dates to 1852 and has been a store since 1866, not only sells penny candy from wooden shelves and you-pick-it glass jars, but it also sometimes encourages young children to use pencil and paper to total up their purchases before they get to the counter.

The nickelodeon plays music, there’s an ice cream operation—the Brewster Scoop—that’s run from a cottage next store between Memorial Day and Labor Day and the second floor has an area dedicated to military toys and World War II-era posters.

It’s also got a potbellied stove where folks gather for coffee and conversation. “By 7 o’clock, we’ve solved the problems of the world,” says one regular.

And they’ve got lamp oil. Hey, you never know. They get hurricanes up here.

“We feel like we’re the owners of an institution, and we’re safeguarding it,” said Boyd, who’s been running the place with husband George since 1986. “If Brewster were a human being, the store would be its heart.”

The same goes for the Hastings Store, where one Hastings or another has been running things in the wooden building across the street from Joe’s Pond since 1913.

Larrabee and wife Jane, who grew up in the place, are the current owners.

The shelves are chockablock with maple syrup, maple cookies, hunting journals, antique bottles and groceries. There are T-shirts and sweatshirts and a mounted buck’s head on one wall.

Located on the road between the state capital in Montpelier and the lush vacationland known as the Northeast Kingdom, Hastings Store is a frequent stop-off for travelers.

“We’re cute,” Larrabee said. “So people stop in and take photographs of the store and say, ‘Oh, this is what it was like when I was a kid.’”

In neighboring New Hampshire, the Old Country Store and Museum in Moultonborough boasts it’s “Perhaps the oldest in the United States, a store since 1781.”

Here, the emphasis is on the “old.” It sells cookbooks, cookware, kitchen gadgets, wrought-iron hardware, clothing, Cabot cheese that is aged in a cellar downstairs, maple syrup that’s made in an apartment upstairs and pickles from a porcelain barrel in the front.

“When you walk into the store, you’d swear you just walked back 150 years,” says clerk Jonathan Hayden, who’s married to one of the Holdens, the family that has owned it since 1973. “We’ve been as lucky as we have been because we have not changed a thing. Most of our business—75 percent—is repeat business, locals. The rest is ‘Oh, my God, when you go there, you must stop at this place. You won’t believe it!’” he said.

The store, which offers 7,000 products, is a popular destination for fall foliage bus tours.

And they have almost everything, from groceries and hardware to the second-floor bridal shop—next to the gun section—with gowns ranging in price from $100 to $900.

“We have people come in, and they want to buy a gun and buy a wedding gown,” said Kristen Austin, 26, whose great-grandparents founded the place. “Sometimes, they want to go out and take a picture of them in a wedding gown with a gun. Some people are actually looking for that shotgun wedding kind of thing.”