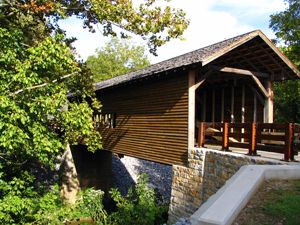 The Harrisburg Covered Bridge near Sevierville, Tenn. This file is licensed under the Creative Commons Attribution 2.0 Generic license.

SEVIERVILLE, Tenn. (AP) – A covered bridge in the Smoky Mountains foothills has been damaged.

The Harrisburg Covered Bridge is the only historic bridge open to traffic and a beam inside it was broken over the weekend, apparently when a truck hauling a backhoe tried to cross it, according to The Mountain Press.

Sevier County Highways Superintendent Jonas Smelcer says he believes the roof beam that was broken is original to the 1875 span and could be difficult to replace. The bridge remains open and has been deemed structurally sound.

Local artist Robert Tino has popularized the bridge, painting two seasonal views of it and also putting it on Christmas cards.

Neighbors said they heard a noise Saturday night and when they checked, the bridge was damaged and no one was there.

Information from: The Mountain Press, http://www.themountainpress.com 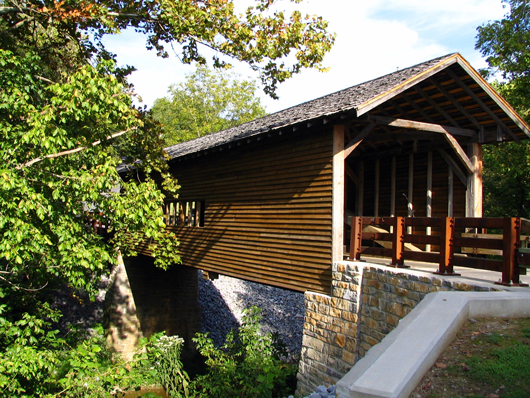 The Harrisburg Covered Bridge near Sevierville, Tenn. This file is licensed under the Creative Commons Attribution 2.0 Generic license.