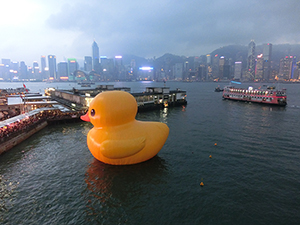 HONG KONG (AFP) – Hong Kong on Tuesday joyfully welcomed the return of a giant inflatable rubber duck, which drew tens of thousands of visitors before it was abruptly deflated for maintenance for almost a week.

The southern Chinese city has taken the 54-foot-tall yellow inflatable duck, conceived by Dutch artist Florentijn Hofman, to its heart since it was towed into the harbor on May 2 to cheering crowds.

Duck mania has gripped the city ever since, with locals and tourists packing the streets near where it is moored to catch a glimpse of it. Stalls and shops throughout the city sold replicas and restaurants created special duck dishes.

So many were disconsolate when the cheerful giant-size bath toy was transformed into a deflated disc resembling a floating fried egg last Wednesday.

“It went for a body check and for maintenance, now all the work is finished and it will see everybody again,” Andrew Yeung, advertising and promotions manager of shopping mall Harbour City which is organising the exhibit, told AFP.

Hundreds packed the waterfront late Tuesday and greeted the duck with cheers.

“I thought that once it got deflated, it wouldn’t come back again. So now I see that it is back, I am very happy,” said 28 year-old Bonibelle Lee, who was carrying a three-dimensional duck tote bag with matching yellow rain boots.

Since 2007 the duck has traveled to 13 different cities in nine countries ranging from Brazil to Australia in its journey around the world.

Hofman said he hopes the duck, which is due to stay in Hong Kong until June 9, will act as a catalyst to connect people to public art. 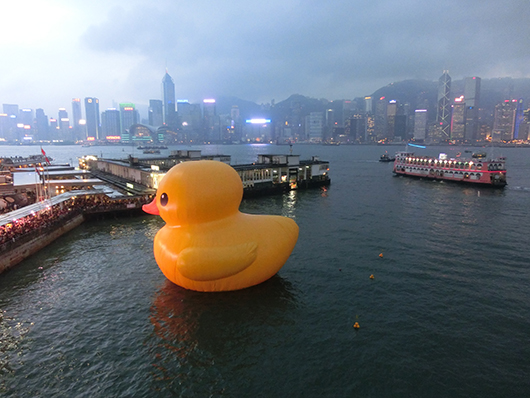