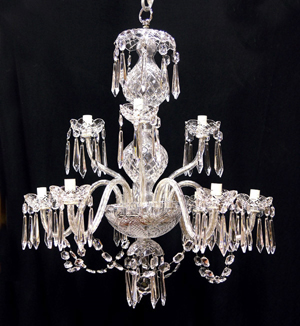 Waterford has been synonymous with fine crystal, including glass chandeliers. Image courtesy of Clars Auction Gallery and LiveAuctioneers archive.

DUBLIN (AP) – Ireland’s historic Waterford Crystal factory is for sale one year after its parent company went bankrupt and sold its brands and many assets to an American private equity firm, the plant’s liquidators confirmed Tuesday.

Bankruptcy officials shut the debt-crippled factory in January 2009, ending more than 60 years of lead-crystal production in the southeast city of Waterford. The new owners of the Waterford brand, KPS Capital Partners of New York, have already shifted production to Germany and Eastern Europe.

KPS did not buy the factory itself in Waterford, where local business and tourist chiefs had hoped that a white-knight investor might step in to revive production on the 38-acre site.

David Carson, the Irish accountant overseeing the demise of Waterford Crystal’s Irish operations, said the factory is being offered for sale as a development site rather than as a continuing operation.

The decision follows a November Internet auction of the vast bulk of the plant’s manufacturing equipment to bidders from Eastern Europe, Asia and the Middle East. The centerpiece of the factory, a furnace capable of holding 50 tons of molten glass, remains unsold.

Irish real-estate experts say the site and buildings are worth between euro 10 million and euro 20 million ($15 million to $30 million) – but could lie idle for years given Ireland’s moribund market for commercial property.

KPS continues to employ about 50 people at the Waterford site in the city at its visitors center and product-marketing offices. But more than 1,800 former Waterford Crystal employees have lost their pensions as part of the company’s collapse.

Copyright 2010, Associated Press. All rights reserved. This material may not be published, broadcast, rewritten or redistributed.