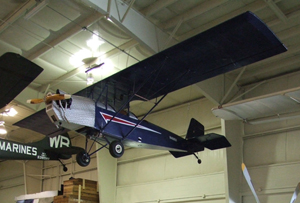 The Pietenpol Air Camper is a simple homebuilt aircraft, which was designed and flown by Bernard H. Pietenpol in 1928. Image courtesy Air Zoo, Kalamazoo, Mich.

KALAMAZOO, Mich. (AP) – It took 38 years before Bob Humbert took off in his homebuilt airplane.

Now the plane will never touch down again.

“It looks great,” Humbert said last week, looking up to see the aircraft suspended from the ceiling of the Kalamazoo Air Zoo.

Humbert, 74, recently had his first look after donating the single-engine Pietenpol Air Camper to the aeronautical museum, just south of the Kalamazoo-Battle Creek International Airport.

“To have it there means a whole lot,” Humbert said. “It’s like a life’s dream come true.”

A microbiologist who retired from the Kellogg Co. in 1997, Humbert has a love of flying.

He started planning the plane in the mid-1960s and constructing it on his dining room table. He expected to build the plane in a couple of years.

Instead, work and family interfered and he soloed the plane on June 22, 2007.

Federal regulations require that the pilot of a homebuilt plane fly it 40 hours before taking passengers or flying farther than 25 miles from the airport.

He had planned to take his wife, Dortha, as his first passenger but just as he reached the 40-hour mark he developed positional vertigo. He never flew the plane again and his wife’s only ride was to taxi on the runway.

The plane is a single-engine, open cockpit monoplane designed to be powered by a Ford Model A engine. The first ones were flown in 1929.

“It was a real novelty at the time,” he said. “People didn’t believe that an aircraft could be powered by an automobile engine.”

He once described the plane as low and slow and said he chose to build it “because it can land on a grass strip and you can feel the wind. It’s a different kind of adventure than getting up and going 200 miles an hour.”

He modified the plane by installing an aircraft engine but otherwise the design of a wood structure covered with fabric was original.

“The design goes back so far and has been in use for so long,” he said. “The planes are still being built today.”

But by last year Humbert said he knew because of the vertigo, he would not be able to fly anymore and began thinking about what to

For the last eight years he has volunteered at the Air Zoo.

“I started volunteering just because of my love of aviation,” Humbert said, “and my love of aircraft and the opportunity to be around airplanes and learning more about them and talking to people on a regular basis who love them and have knowledge of them.”

So the Air Zoo was his first choice for the plane.

“It is probably one of the finest non-governmental aviation museums in the Midwest,” he said.

“It is unusual for them to take a homebuilt unless there is a special interest. But I think the age and the uniqueness of the design is part of why the Air Zoo accepted it.”

Humbert talked to Bob Ellis, president and CEO and Ellis came to Battle Creek to look at the plane late last year.

In December it was dismantled and placed on a trailer and hauled to the Air Zoo. It was reassembled and is now hanging in the former East Campus and what will become the Restoration Center. That portion of the Air Zoo should be open to the public this summer and will contain several planes and will allow people to watch work on restoring aircraft.

Humbert, now battling cancer, recently visited the building and saw the plane for the first time since it left Battle Creek.

The visit was a time for him to see staff and other volunteers and for Ellis to explain that the display was as much about Humbert as the plane.

“All the planes have a story,” he said. “This one is an example of an early home-built aircraft and shows innovation.”

But more than that, he said the plane is also about Humbert and flying.

“This is all about the dreams and the passions that are the stories of flight,” Ellis said. “And you have to know the story that Bob had a dream 40 years ago and that dream came true.

“It is a story about dreaming,” he said. “And this plane will always be flying.” 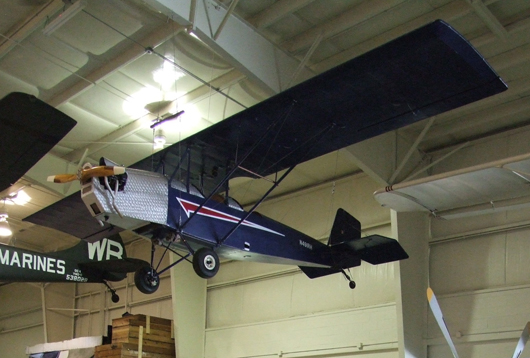 The Pietenpol Air Camper is a simple homebuilt aircraft, which was designed and flown by Bernard H. Pietenpol in 1928. Image courtesy Air Zoo, Kalamazoo, Mich.

Museum of the Confederacy to present flag program
Scroll to top