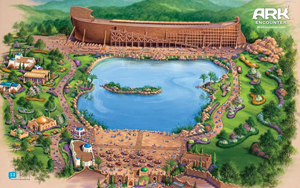 FRANKFORT, Ky. (AP) – A group of investors looking to build a replica of Noah’s Ark as part of a proposed $172 million theme park cleared its first bureaucratic hurdle on Monday.

The Kentucky Tourism Development Finance Authority granted preliminary approval for state tax incentives for the project. An economic analysis must be done before being considered for final approval.

“Actually, all we’re doing is saying ‘go do your study and bring it back to us,”’ said Darrel BeShears, a member of the financing panel.

Mike Zovath, co-founder of the Answers in Genesis ministry that opened the Creation Museum in Kentucky three years ago, said investors are looking to build a full-scale replica of the ark in what would be an expansive theme park that could draw some 1.6 million visitors a year.

Gov. Steve Beshear, who gave the proposal in a Capitol press conference earlier this month, has said he favors tax incentives for the ark park that is projected to create about 900 permanent jobs and have a $214 million economic impact in its first year of operation.

Some detractors, including Americans United for the Separation of Church and State executive director Barry Lynn, have objected to the state providing tax incentives for a project with a religious theme. Lynn said religious projects should be supported by voluntary donations, not the government.

The newest project would include an ancient walled city, a petting zoo, live animal shows featuring giraffes and elephants and a replica of the biblical Tower of Babel.

Kentucky Speedway is undergoing an $82 million expansion to accommodate the Sprint Cup. That includes expanding seating from 60,000 to 102,000.

Report: Philly ahead of nation in creative sector
Scroll to top